Home | Romania | No Rhododendrons on the Ciucas Mountain

No Rhododendrons on the Ciucas Mountain 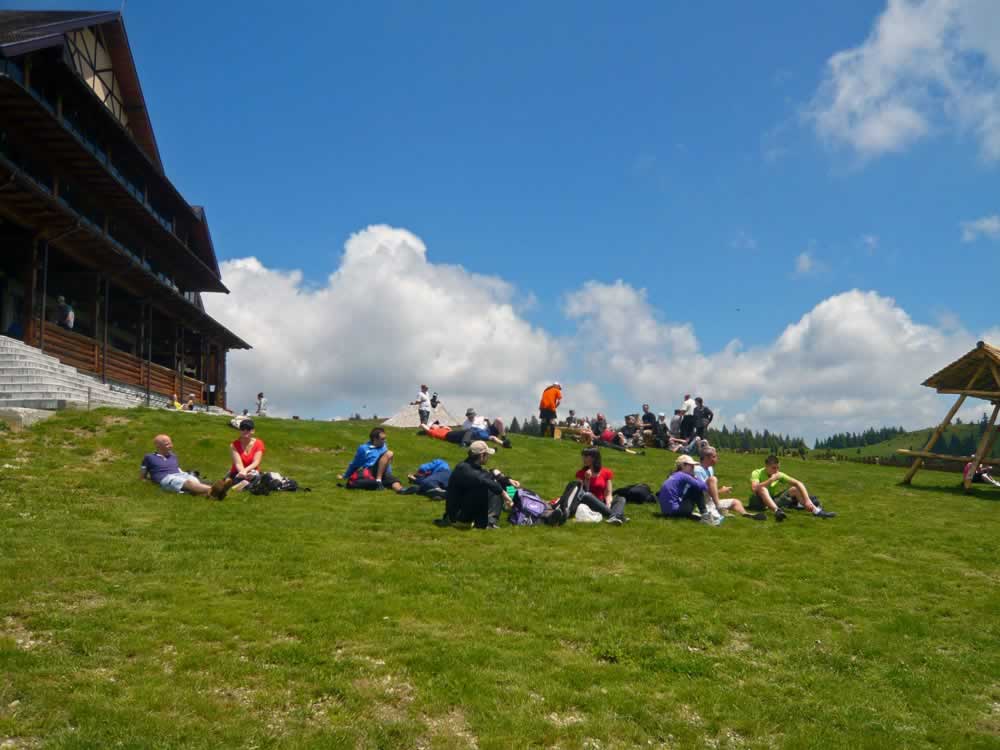 I was much too tired to remember why I went up there in the first place. The wind through my hair and through my wet clothes was fabulous, a true catalyst for forgetting. For a moment, I had no past. I was only eyes and skin, kissed by wind and sun together. I even forgot that my jeans were full of mud since my feet decided to go faster and left me behind in one of the biggest mud puddles on the path. No, I don’t have photos of that moment, in case you were wondering 🙂

Then I saw three little purple flowers at the edge of the path and my memory came back: I went there to see the rhododendrons. All three of them!!!

The promise of this trip was something like the photo below (which is not mine, as my rhododendrons were only three). 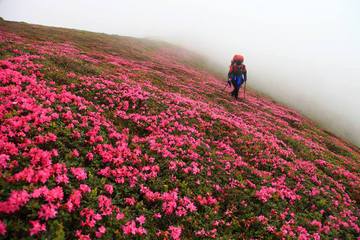 This is where the name of Muntele Rosu (Red Mountain) comes from.

The reality was a storm came and destroyed almost all flowers just a couple of days before our trip, so we were left with this: 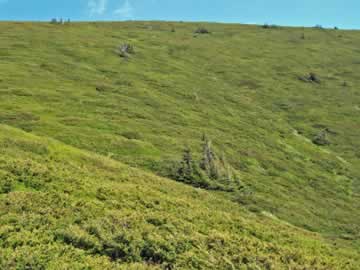 Does this sound like your life? Expectations, anticipation, plans, they all fade in front of reality at times. It’s up to you, though, to make the best out of every situation and be thankful for whatever comes your way.

Anyway, if you are in Romania during the month of June, you can do this cool hiking trip in the Ciucas Mountains and you have a chance to step on the red carpet of flowers. Even if you miss the flowers, this is an excellent walk, perfect for a one-day trip from Bucharest.

The Ciucas Mountains are a bit up from Cheia, mountain resort located at about 125 km from Bucharest, on road DN1A. In order to get there, exit Bucharest through DN1 and follow this road until you get to Ploiesti. It’s easy, it’s the way to the airport, just in case you need to ask for directions. Just before Ploiesti, you need to turn a little to the right to enter DN1A. Pay attention to road signs, because it’s very easy to end up in the parking of Carrefour supermarket. That happened to me, but I went through the whole parking and exited on its other side, just nearby DN1A.

The road from Ploiesti to Cheia is narrow and curvy and it goes through lots of villages, so you won’t be able to drive much faster than 50-70km/h, which is the legal maximum speed in most of those villages. When you get to Cheia, don’t enter the town. Follow the main road for about 5km more and you’ll see a big sign saying Muntele Rosu and a forest road turning right into the woods. That’s the road you need to take. You’ll have 5km of bumps and holes, but you can switch off the air conditioning and open the windows, because the air will be fresh and you’ll soon be all covered in sweat because of the driving conditions. 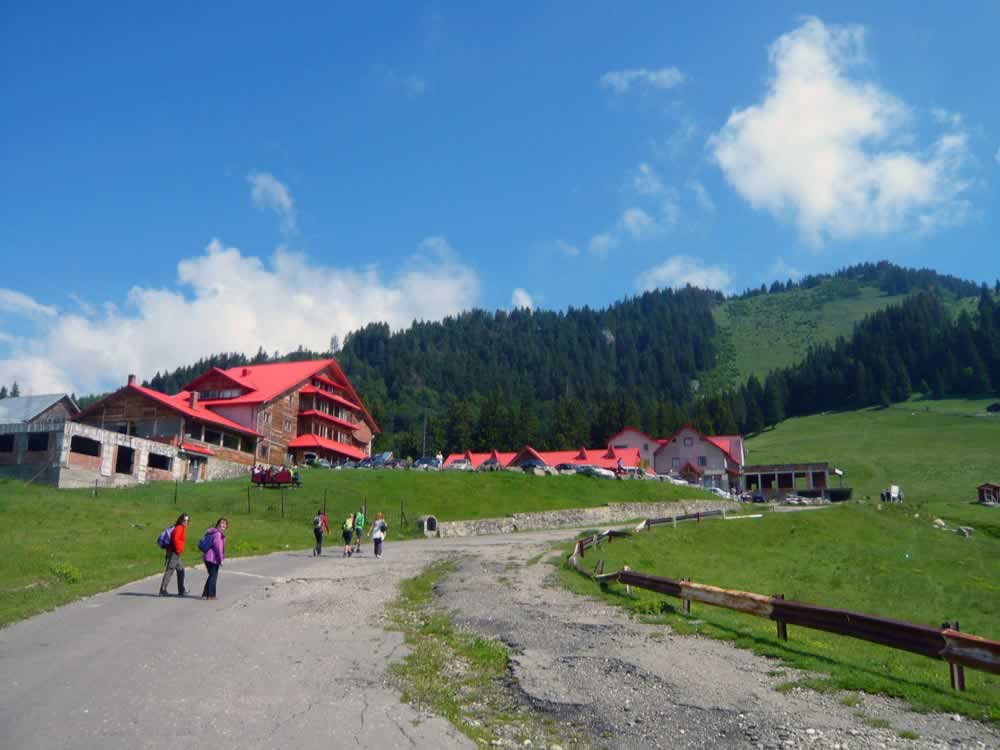 This is the chalet at Muntele Rosu. I didn’t crop the photo on purpose, so you can see the road condition – this is one of its best parts 🙂

It’s best to leave Bucharest early in the morning (7am-8am is good, if you can make it), as you need between two and three hours to get to Cabana Muntele Rosu (Red Mountain Chalet), the starting point for all hikes in the area. If you want, you can leave your car in Cheia and take a mountain path to Muntele Rosu, but that’s not as good as walking on the top of the mountains.

This is a round trip that takes about 6 hours to complete. There are other paths you can take, but I’ll describe only this one, because that’s the one I did two weeks ago. I’ll mention the others at the end of the article, for those of you who are interested about hiking in Romania.

The first part of the path is the most soliciting, because it starts at 1260m altitude (Cabana Muntele Rosu) and goes up to 1550m (Cabana Ciucas). If you are fit, you can do it in a bit more than one hour. If you are not so fit, you can expect to get to Cabana Ciucas in about two hours. Although soliciting, the path is not difficult at all, it is clearly marked and there are no dangerous zones on the way. It is accessible all year round, unlike more difficult paths which are not recommended in winter. It’s even safe to take your children with you, if they can walk.

Although Valea Berii means The Valley of the Beer, the first beer you’ll encounter will be at Cabana Ciucas. You can take some water with you for the road, but if you forget, it’s no big deal, because you’ll pass by the Nicolae Ioan fountain, where you can refill your bottle or fill up your stomach in case you didn’t think to take a bottle with you. From here, the path is even steeper than before, so you’ll have the chance of a good cardio exercise. It’s on paths like this, where you realize how unfit you are. I was surprised to see I was less fit than I would have thought. 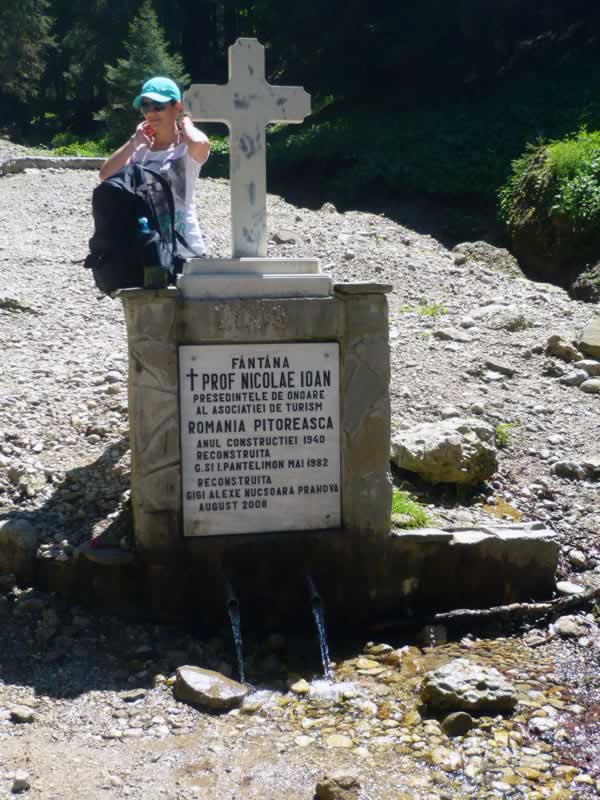 You can safely drink the water from this fountain. It’s not really a fountain, the water comes from the Teleajen Spring. The fountain was first built in 1940, then rebuilt once in 1982 and a second time in 2008. This is the point where three mountain paths meet: the one that comes from Muntele Rosu Chalet, Valea Berii and Ciucas Chalet

Cabana Ciucas is the perfect place for a long rest. There’s food, water, coffee and beer. I only had a coffee. It was good and I paid 5 lei for it. I didn’t get any food, because I ate some of my homemade sandwiches, in my attempt of making my backpack lighter for the next part of the trip.

There are even rooms at Ciucas chalet, in case you want to sleep there and explore the surrounding mountains over a couple of days. I spotted some 4×4 cars in front of the chalet, so I imagine you have this alternative in case you hate hiking uphill. Anyway, here’s the link to the website of Cabana Ciucas. They don’t have an English version, but there are lots of photos, so you can make yourself an idea about the area.

The lawn in front of the Ciucas chalet 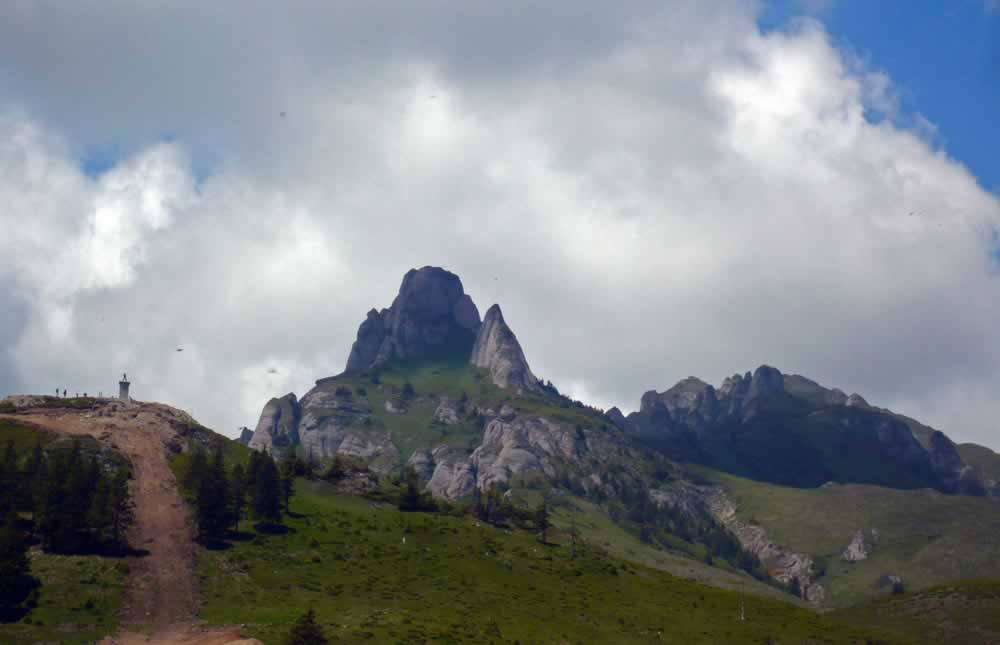 The Ciucas Peak is visible from Cabana Ciucas. It looks close, but I guess you need to walk for at least 30 minutes to get there. We didn’t this time.

From Cabana Ciucas, follow the red line mark to Saua Chirusca. This is an easy hike, because there’s almost no difference in altitude between the two. From Saua Chirusca, follow the red cross marks to Saua Gropsoarele and then to La Rascruce. You should be there in less than two hours from your departure from Cabana Ciucas. This is truly a beautiful and relaxing walk, the landscape is awesome and if you’re lucky, you’ll end up on the Rhododendrons carpet which we missed by a couple of days.

From La Rascruce, you need to take the red triangle path down to Muntele Rosu. This is a constant but not very steep descent which takes about 1.5 hours. It’s not difficult, but you surely need to pay a lot of attention to the path, because there are stones and tree roots on the most part of it. 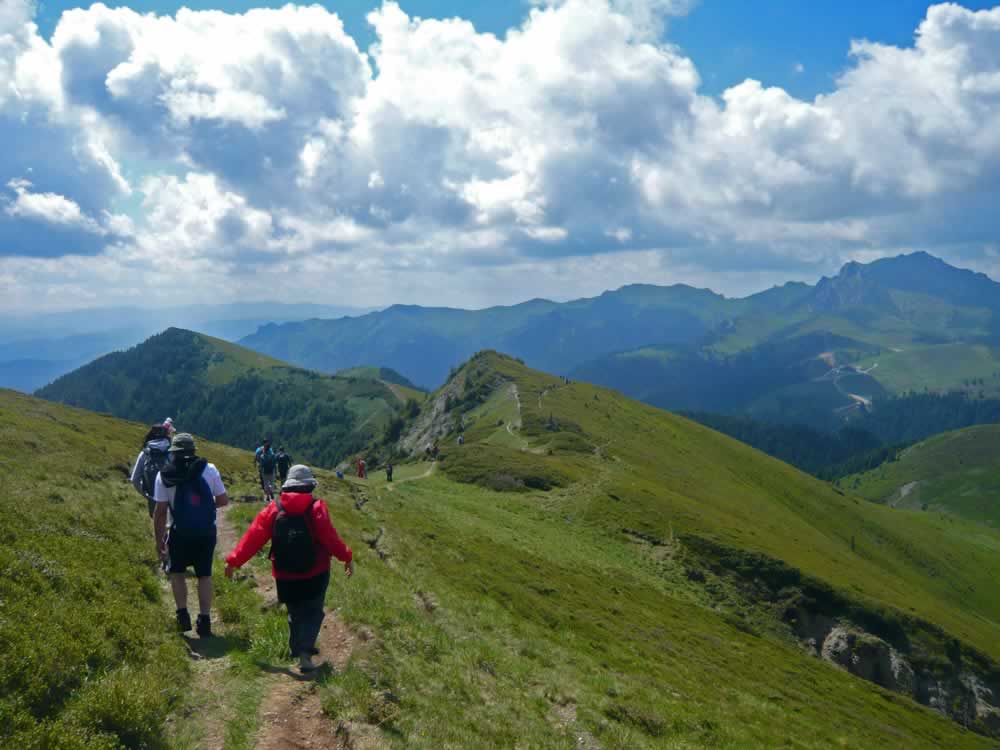 The narrow path follows the ridge and it is surrounded by spectacular landscape. 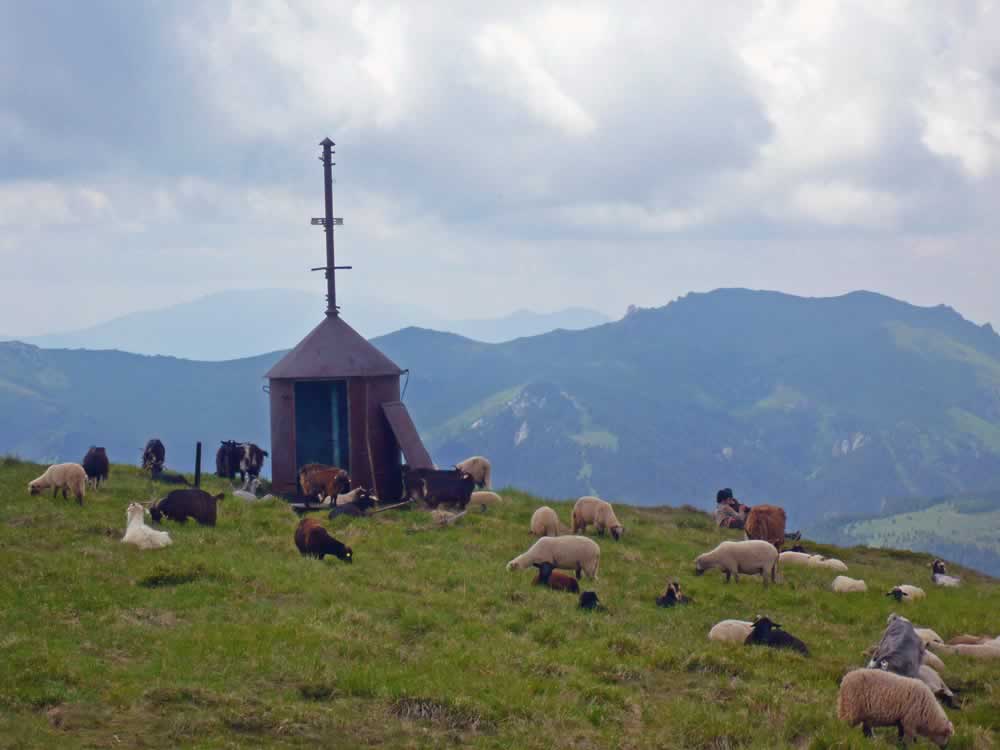 This metal construction is a shelter where shepherds can enter when it rains. I first thought it was some oven or barbecue for cooking the sheep, that’s why I went closer to take a photo, to show you some Romanian style cooking 🙂

If you want, you can sleep at Muntele Rosu Chalet. I never slept there, but as far as I know, the conditions are decent. The food is good, I ate there many times, however, you have to be prepared to wait quite a while for your order. 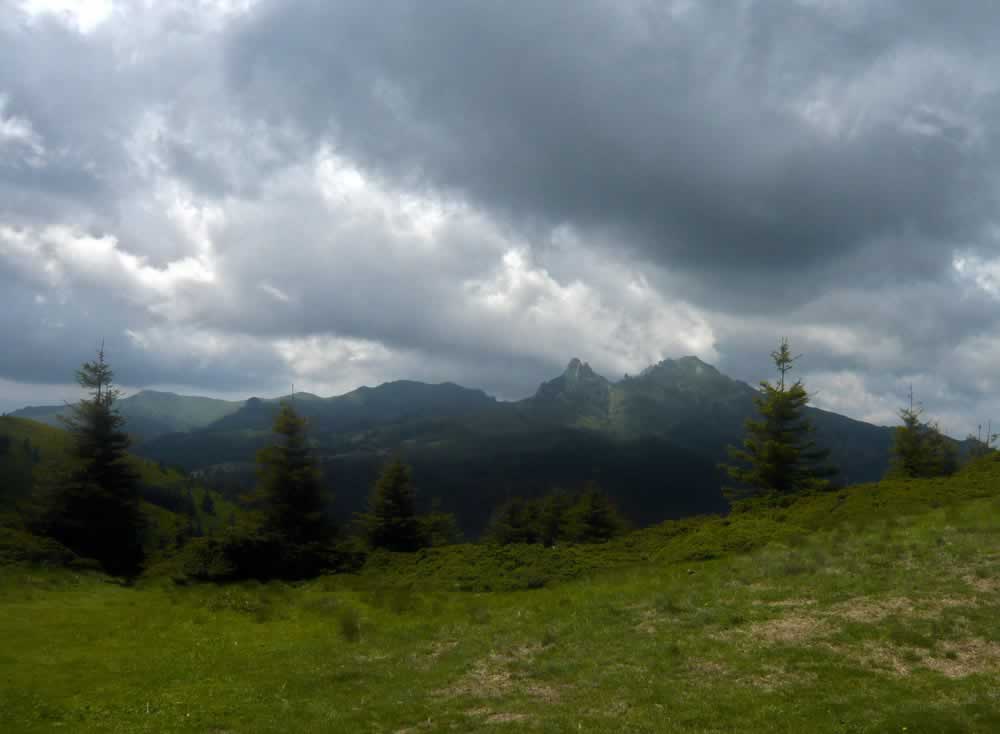 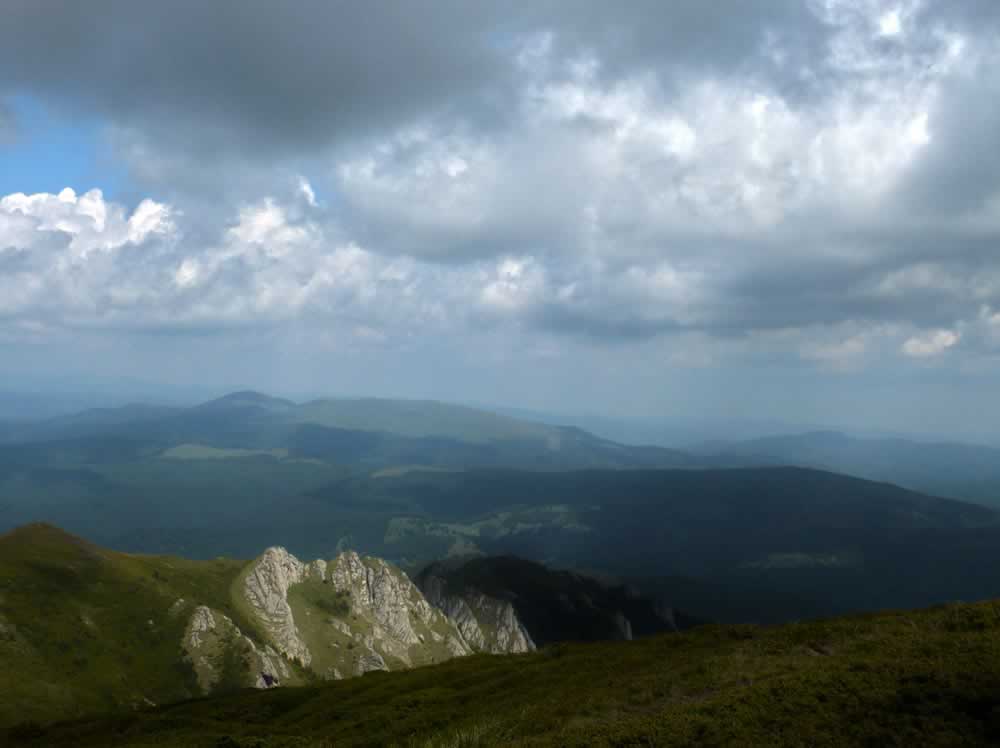 HDR landscape in the Ciucas Mountains

Here’s a map of the Ciucas mountains, with hiking paths and chalets marked on it. I scanned it from an old book. Click on it to see it larger, otherwise I doubt you’ll be able to read anything. 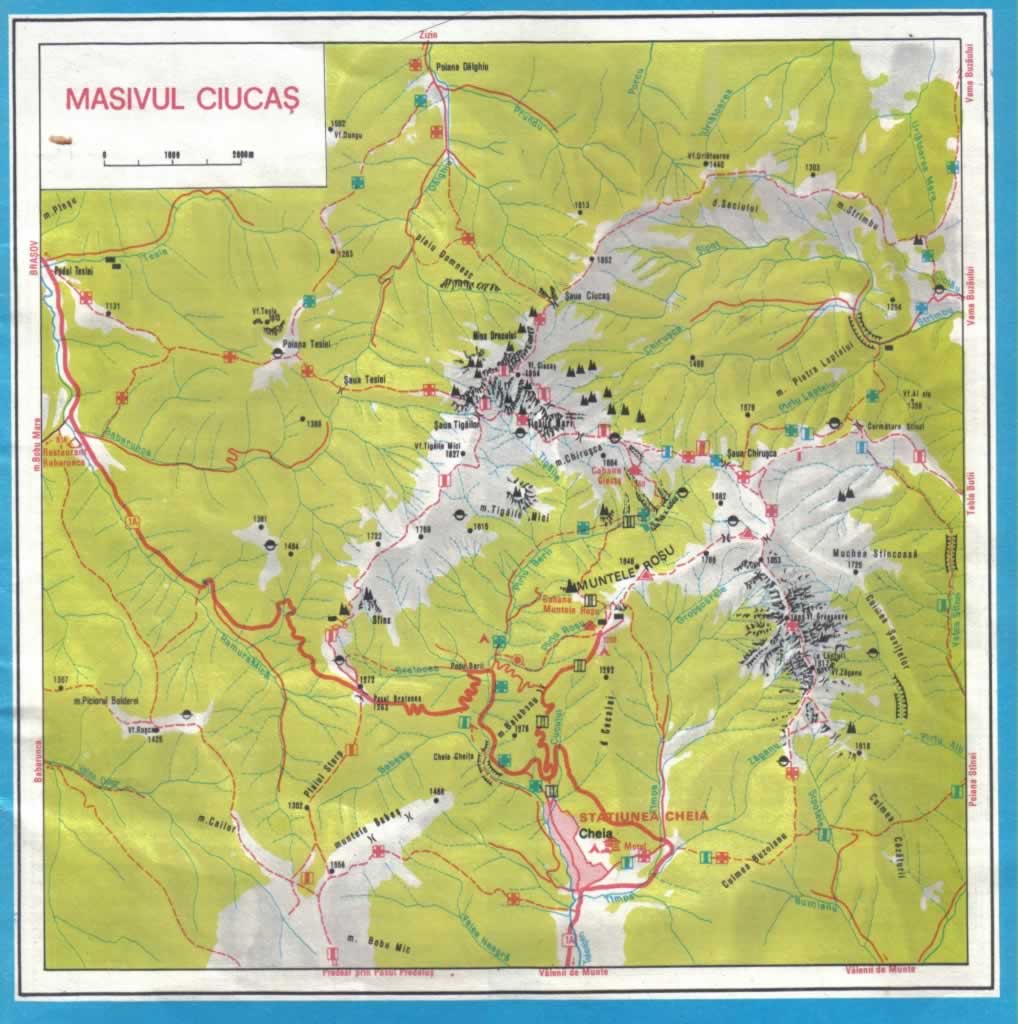 Can you discover the trail I just described on this map?

Hiking in Romania When You Don’t Know Anybody

Regarding the dangers on these paths, I can tell you there is a wild life in these mountains, so you may meet foxes, bears, wolves and wild cats. However, I very much doubt they come on the paths that are beaten by humans, so you should probably worry more about shepherd dogs rather than wild beasts. Even so, it’s not a good idea to go by yourself, because you never know what may happen.

If you’re alone in Bucharest and feel like hiking, I have a tip for you. There’s this cool group on Meetup.com, called Friends in Bucharest, which organizes group hiking trips.

I went with Friends in Bucharest on this trip to Ciucas Mountains and I highly recommend them. We were about 60 people, which seemed like a far too big group for my taste, but everything was just perfect. Nobody was late, everybody was very nice, the trip went just as scheduled and we all enjoyed a perfect day outdoors. Well, at least I had a great time, but I guess everybody else did, too.

There are no upcoming trips scheduled yet, but I’ll let you know as soon as I have news. Meanwhile, you can check out the group and join it, because they also organize evenings in Bucharest, which are also cool.