Home | Greece | Did the Hermits of Meteora Greece Lose Their Privacy to Tourists?

Did the Hermits of Meteora Greece Lose Their Privacy to Tourists? 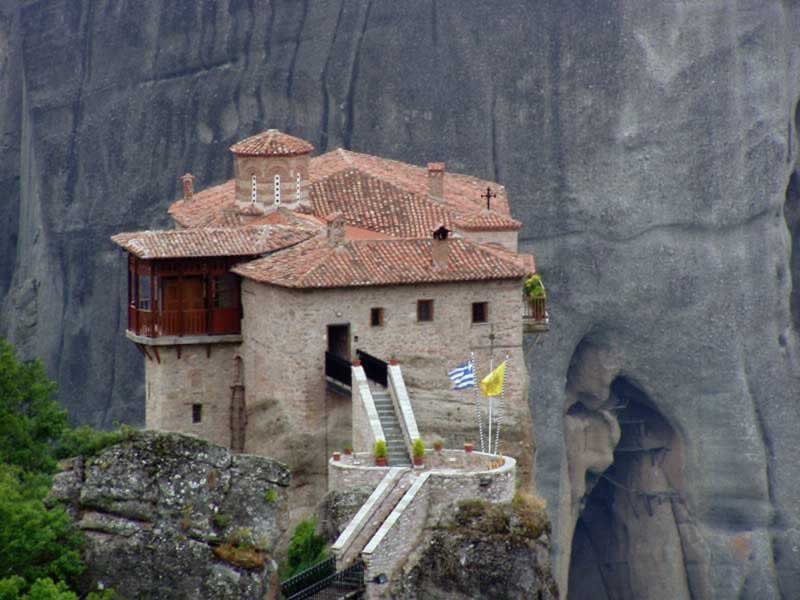 I can’t believe how many fears of our ancestors have provided popular touristic objectives of today. If we only think of how many citadels and fortresses are there, we see that throughout the history humans were anything but friendly. Everybody wanted something that belonged to somebody else, be it a country, a piece of land or simply a handbag. This made security a need for all dwellings or countries that wanted to avoid becoming victims of savage hoards trying to occupy their territories. Meteora Greece with its clifftop monasteries is the perfect example of using nature for defense purposes.

Meteora is a natural rock formation located in Central Greece, in the Thessaly region. The rock is a mix of sandstone and conglomerate.

Out of fear, Greek monks built the Meteora monasteries in Kalambaka straight on the top of huge cliffs. Some of them didn’t even have access by foot. Monks got in and out by sitting in a basket hanging on a rope or by using wooden ladders which could be drawn up in case of danger.

Here’s one of those lifting systems. As you can see from the detail picture, it looks a bit too modern, I guess the motor has been added in our days. Anyway, it’s still interesting: 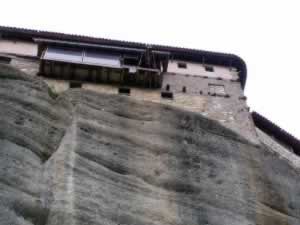 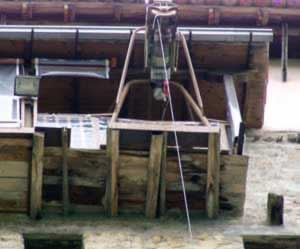 Here’s another lifting basket, which looks more like the original thing: 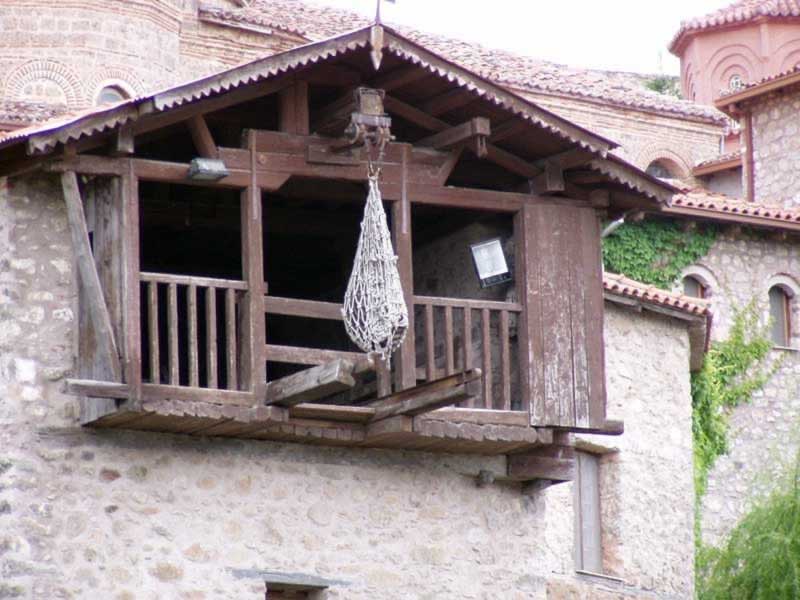 Monks in Meteora used such baskets to lift supplies and people

The Meteora Greece monasteries were built between mid-14th century and mid-16th century. In the beginning, there were about 23 of them (as far as I remember). 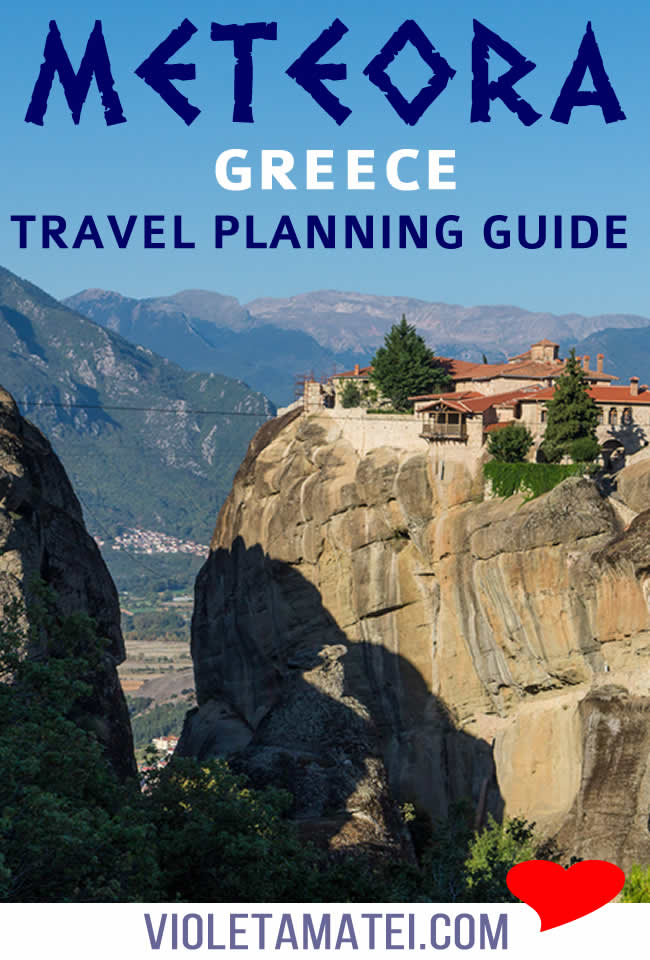 How Many Meteora Monasteries Are Still There?

Only six of them are still erect nowadays: The Great Meteoron, Varlaam, The Holy Trinity, Roussanou, St. Stephen’s and The Holy Monastery of Saint Nicholas of Anapafsas. St. Stephen’s Monastery is the most accessible to tourists, as it has a bridge that allows you to get to the entrance without having to climb hundreds of stairs.

If you want to relax and let other do all the work, you can book a private tour from Kalabaka to see the rocks in the sunset, during the golden hour, or this 5 hour hiking tour of Meteora.

If you’ve seen the James Bond movie For Your Eyes Only, you may remember that some of the scenes in the movie were shot here, in The Holy Trinity Monastery. If you spend the night in Kalambaka, get to Agia Triada first thing in the morning, before 9am. At 9am sharp, you’ll have the opportunity to see and photograph the cable car moving. A good zoom lens would help you get some nice shots, but you’ll do just fine with a 55mm one. 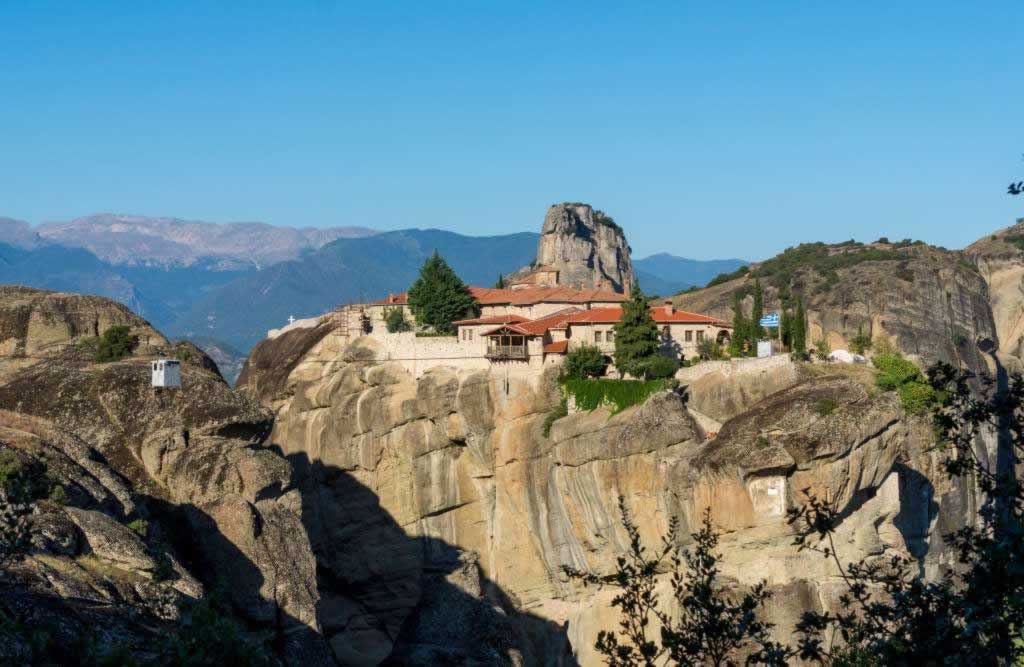 The Holy Trinity Monastery with the cable car moving on the rope. I’ve been there about ten minutes before 9am to be able to take this photo

After you’re done with the photos, proceed to climbing the stairs to the monastery. Although there were probably over 100 steps, getting there was easier than I had expected. If you don’t have any problems with your legs, you’ll be able to do it regardless of your age and fitness level. There were some really old people climbing those stairs at their own pace. The view from the top is rewarding, so you should definitely give it a try.

By making this monastery your first stop, you’ll manage to avoid tourist buses, as most of them make their first stop by The Great Meteoron Monastery. You’ll get there before anyone else, so you’ll have all the monastery to yourself for a short while.

This is probably the most visited monastery in Meteora, Greece. Most tourist buses stop here first thing in the morning, If you want some photos without people in them, you may want to skip this one or visit it later in the day. 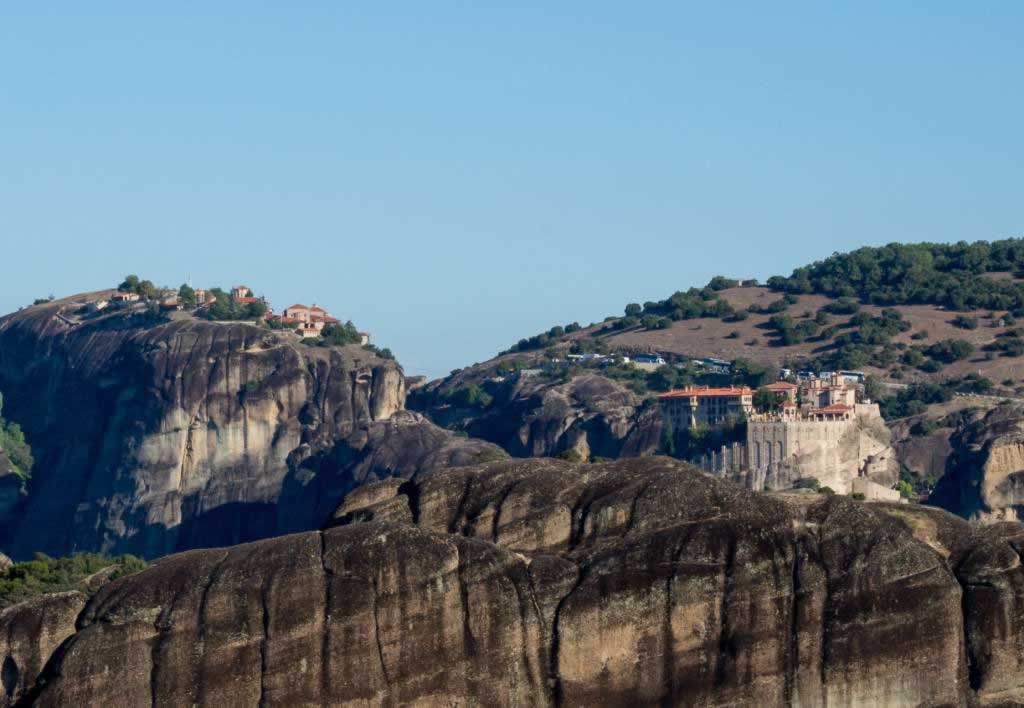 This is The Grand Meteoron monastery as seen from the parking spot at Agia Triada. Can you see those buses already on the road?

The Monastery of Agios Nikolaos Anapafsas

Saint Nikolaos Anapafsas is the first monastery you encounter as you enter Meteora. Built on a very narrow clifftop, this monastery counts several floors. 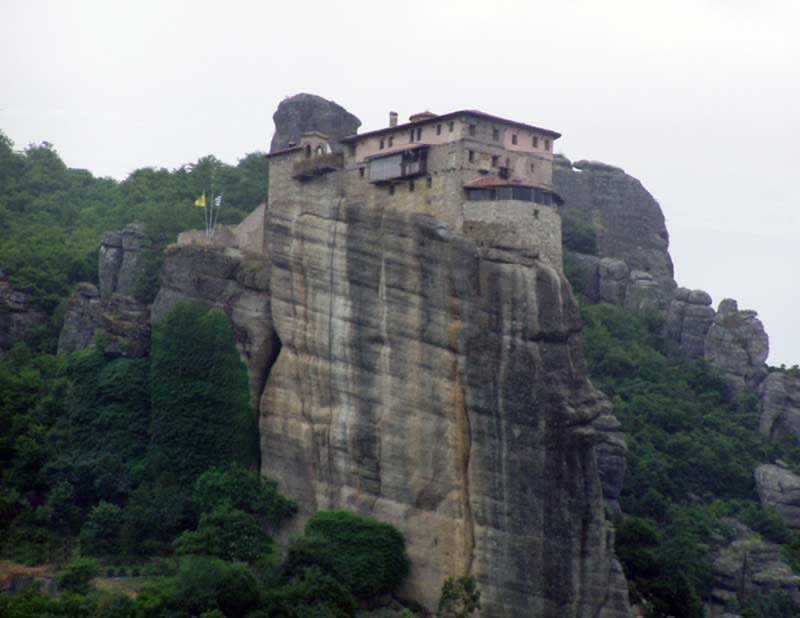 One of the monasteries in Meteora, Kalambaka, Greece – St. Nikolaos Anapafsas 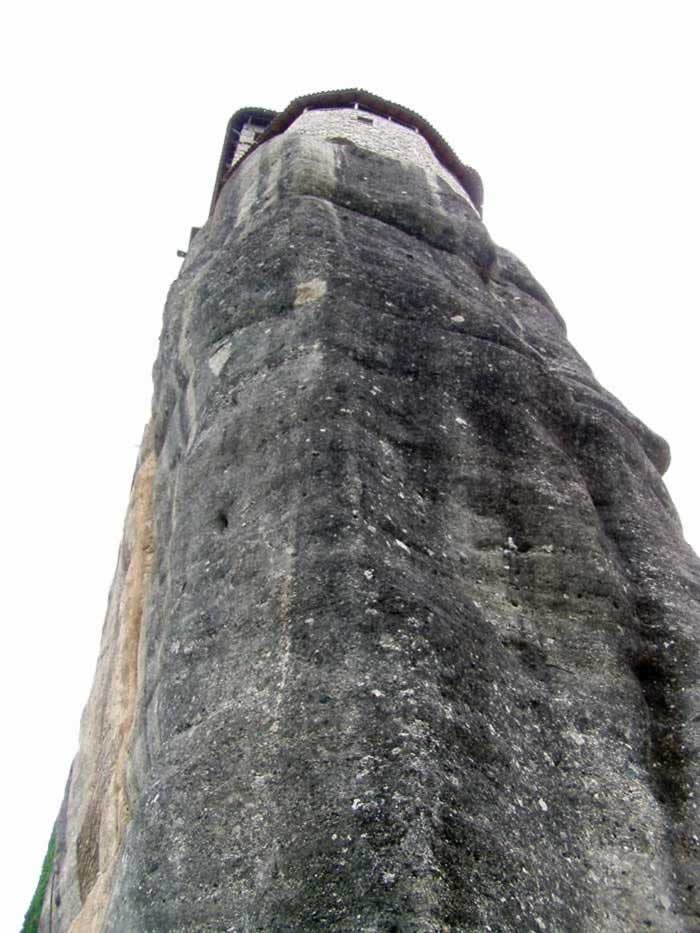 The same monastery seen from the base of the rock

Roussanou Monastery is located on a less tall rock. It offers a beautiful view of the other monasteries and of the valley. It is fairly easy to reach from the main road, as there are only a few flights of stairs to climb. I’ve found it to be one of the most photogenic monasteries in Meteora. 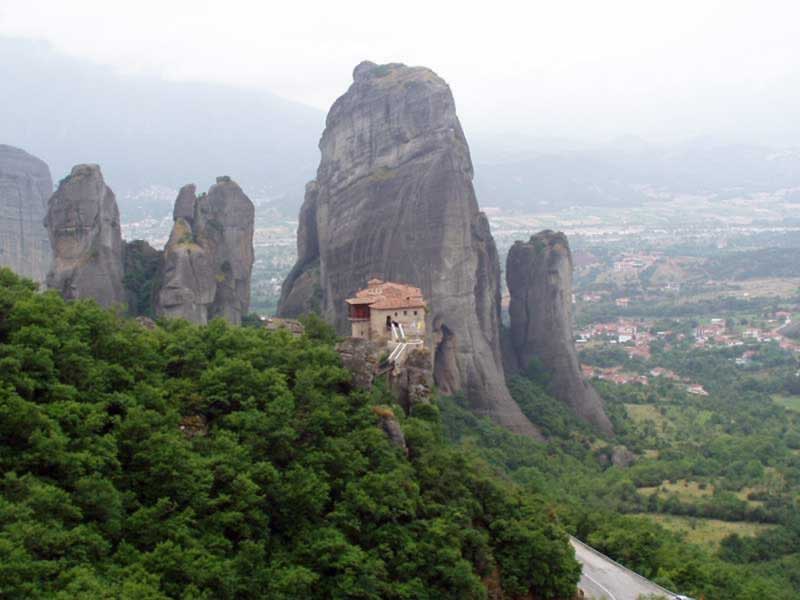 The monastery of Varlaam was actually built by two monks in the early 1500. However, its name comes from Varlaam, the hermit who had built his first dwelling on this clifftop long before monks started to see the benefits of building churches on top of rocks.. 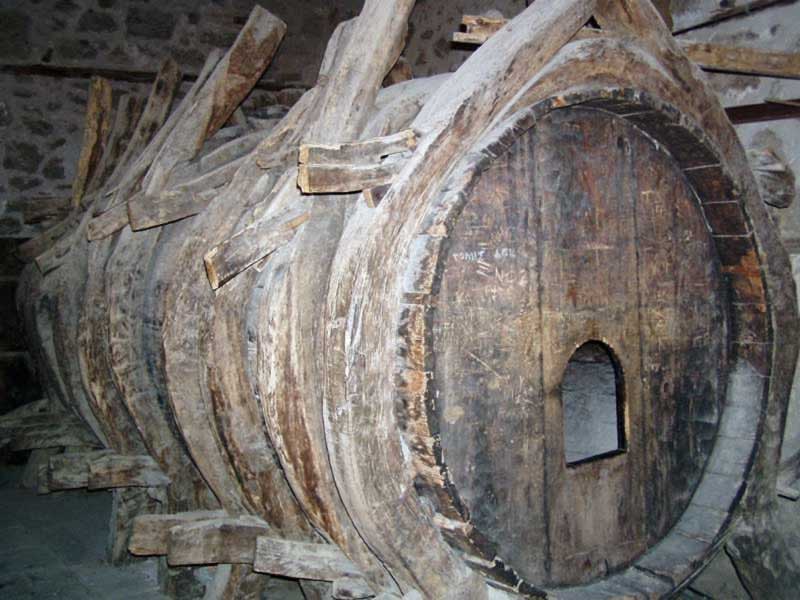 History says Varlaam built a church, a room and a water tank on top of the rock which bears his name today. When I first saw this tank, I thought it was for wine. Water doesn’t sound that exciting, does it?

If you have mobility problems and you can’t climb stairs, you should visit the monastery of Agios Stephanos, as it is the only one that’s connected with the main road via a bridge. 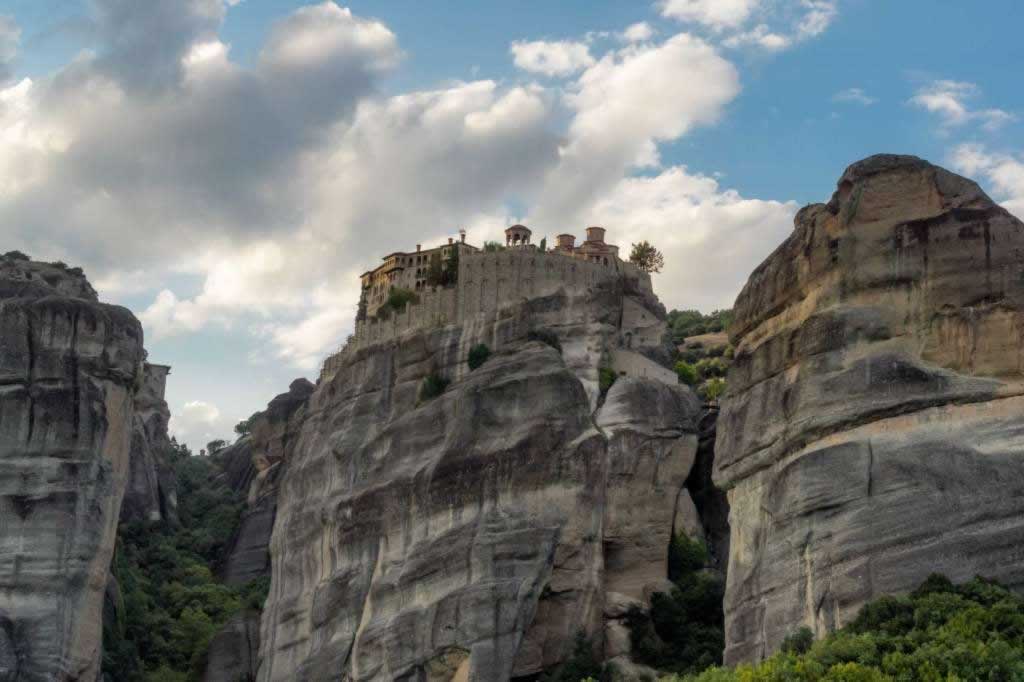 Monks still live in some of the monasteries, but tourists are welcome to visit. Don’t worry, you won’t have to sit in a basket and have the monks pull you up. There are staircases carved in the rock.

I visited the Varlaam monastery the first time and The Holy Trinity on my second trip. You should research the opening times before you go, as not all monasteries are closed on the same day of the week..

Meteora is now one of the UNESCO Heritage sites. Apparently, there are still about 60 monks and nuns living in the remaining monasteries.

The site is fascinating, hence the big number of tourists who visit it each year. I can understand why. I’ve been there once, but I intend to return to find more of the hermit caves where those monks in the past used to live and work. Unfortunately, there aren’t any signs pointing to these hermitage spots, so you’ll need to discover them on your own. I’ve managed to find only one, but I didn’t think to take a photo of it. This is going to be my homework for the next visit.

How To Dress for Meteora

You can wear casual clothing, but you need to be decent. Don’t wear shorts or very short dresses. I had the feeling that the monks weren’t happy about women wearing pants, regardless of their length. I was dressed in jeans and I was invited to wear one of the skirts they give visitors at the entrance. I’m not sure if all monasteries have these skirts to offer you, so make sure you wear proper attire to avoid all problems.

As far as I remember the entrance fee is 3 Euro per monastery.

How To Get To Meteora Greece From Athens

Meteora is in Central Greece, about 300 km from Athens. If you drive there, exit the motorway at Larissa and follow the road to Trikala and Kalabaka. There are organized tours to Meteora from all parts of mainland Greece. However, I’d rather rent a car and go by myself. But that’s just me, I don’t like crowds.

Again, you’d better avoid July and August, as it can get insanely busy and hot. I’ve visited Meteora once in early June and once in September. Both periods are just fine. Nonetheless, you should try to get to the meteors very early in the morning, so that you can get there before the tourist buses.

If you are a group of maximum 7 people, you may want to check out this private tour from Athens to Meteora, here. They will pick you up from your hotel to start your a full-day Meteora trip that includes also a Greek lunch in one of the tavernas ion the area. 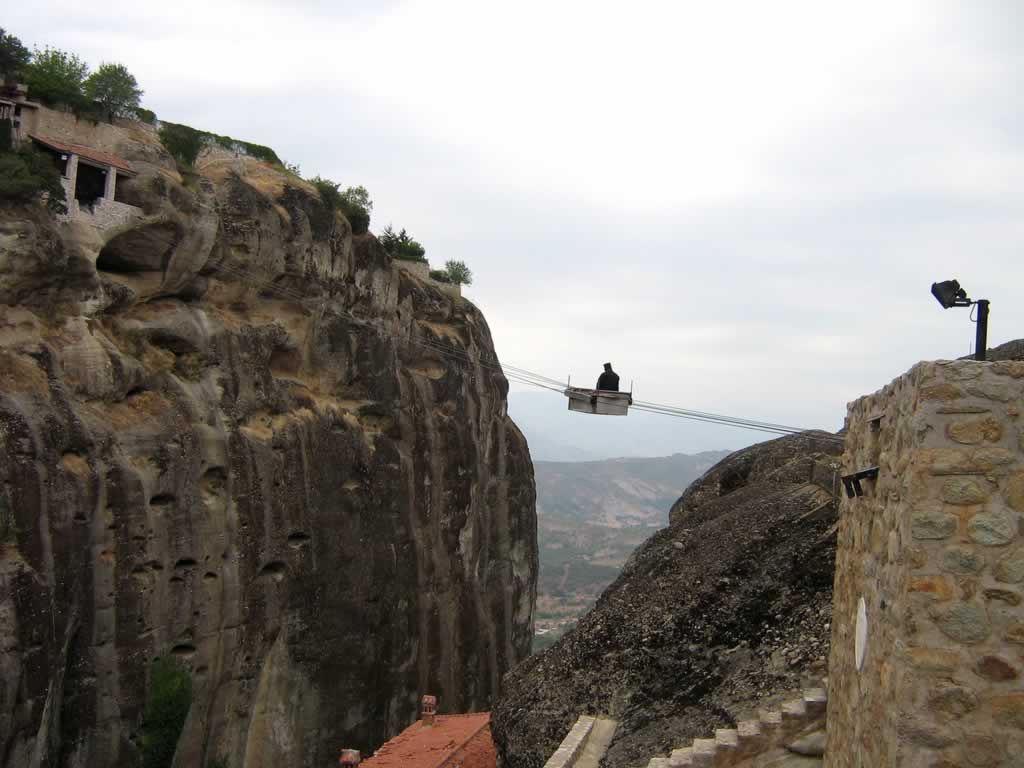 This is how monks get to Megalo Meteoron in order to avoid the tourists (and the stairs, which can be exhausting if you are not that young). Photo credit: cod_gabriel

I’ve been to Meteora in the beginning of June for the first time. It was a rainy day, which was rather daunting for the photos. The big advantage, however, was there were almost no other tourists. Actually, we met some other people, but that was in a restaurant nearby the monasteries area. Too bad I can’t remember the name. I would have sent you there to have a fabulous rabbit stew. Unfortunately, I didn’t realize at that time that I needed to book one night in Kalabaka or in Kastraki, so there was no sunrise for us. The second time I knew we had to sleep there for one night. We booked this hotel in Kalabaka. However, there are enough nice accommodation options in Kastraki, as well.

The second time, it was early September and the weather was simply superb. We witnessed an amazing sunset on top of the rocks. Unlike the other time, we had to share the rocks with dozens of other people. Yet, the scenery was still impressive. Meteora by sunset will leave a strong mark on your brain. You’ll remember it for a long time. The monasteries are also interesting. There’s a small entrance fee, but it is well worth it (I think it’s something around 2 Euro). If you are passionate by history and religion, you’d better get a guided tour to make the most out of your trip to Meteora.

Did you visit Meteora or any other areas in Thessaly, Greece? Which of the monasteries did you like most?

For your information, Meteora is the second-largest religious site in Greece, after Mount Athos. Unlike Mount Athos, it can be be visited by both men and women.

Here are a few Meteora tours you may want to book rather than getting there by yourself. Even if you don’t book any of them, they can serve you as planning guide, as they can help you understand how much time you need for this trip. Keep in mind that going there by yourself will require you to rent a car and to pay for the gas (you’ll probably drive about 900km in total, so you can expect to spend some 70-100 Euro on fuel).