How To Visit the Ancient Cities of Ephesus & Troy in Turkey 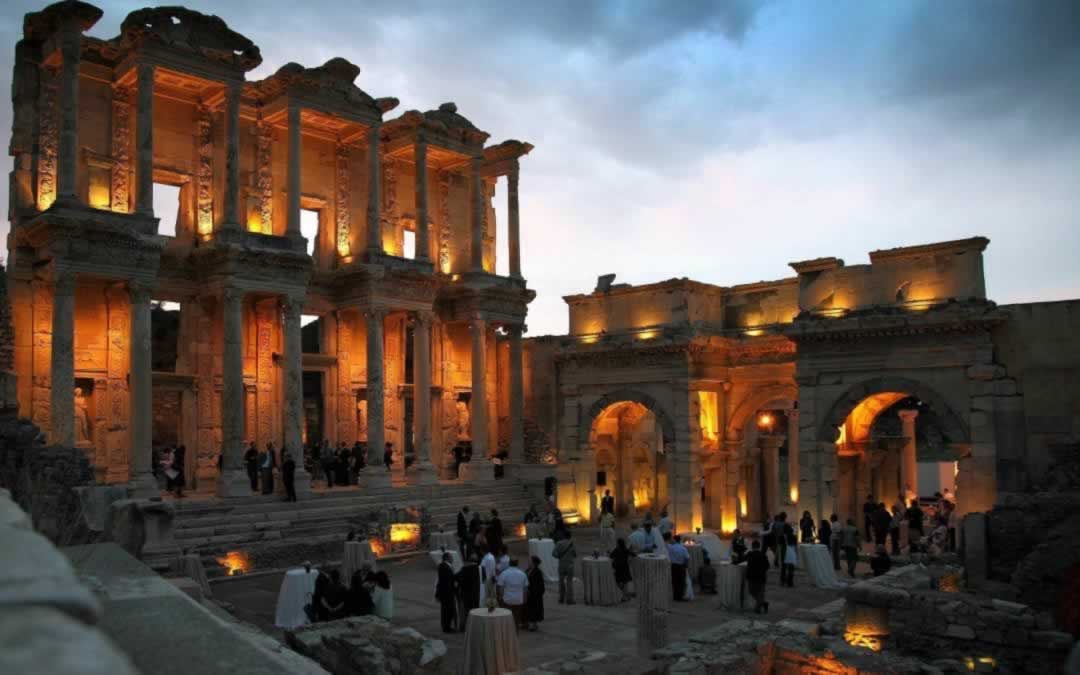 Turkey is one of the most surprising countries in the world. Not only is it a realm of contrasts, where the rich meets the poor, and the new meets the old in a kaleidoscope of flavors, but it is also home to some of the most important vestiges of the ancient Greek civilization. During my first Turkey adventure, back in the 90s, I was surprised to find out that I could visit the ruins of Ephesus and Troy during my Aegean Coast road trip.

This article takes a closer look at various things you need to know if you want visit the ancient cities of Ephesus and Troy (now on Turkish territory), starting with getting your Turkey visa and ending with the best shoes to wear on this trip. Hopefully, it will provide you with the guidance you need to prepare your journey like a pro.

How To Get Your Visa for Turkey the Easy Way

During my first trips to Turkey, I always got my visa on arrival. The process was always cumbersome and time consuming. I still remember the long waiting times at the border between Bulgaria and Turkey, the scorching heat, and the endless walks between the customs offices. We were usually heading to far away places such as Olu Deniz, Bodrum, and Kusadasi, so we were eager to hit the road as quickly as possible, rather than getting stuck at the border, waiting for the visa.

Today this is a story of the past. Long gone are the days when you had to wait for the customs officers to take a look at your papers to let you into their country. Applying for your Turkish visa at the airport is no longer possible, so make sure you get yours online, in advance.

Getting your visa online is probably the best invention since sliced bread. All you need to do is to fill out an application form, to pay the Turkey visa fee, and to wait for the electronic visa to arrive to you by email. This process takes about three days. However, if you need to travel sooner, you can submit an urgent application and get your e-visa within 14 minutes from the moment your payment goes through.

Always make sure that your passport will still be valid for at least 150 days from your date of arrival. If your citizenship entitles you to travel to Turkey with your national ID card, make sure it is valid until the last day of your stay.

How To Visit Turkey: Road Trip or Flight?

When I was younger, road trips were my cup of tea. Resident of Bucharest, Romania, I used to jump in my car, drive across Bulgaria, cross the border into Turkey, drive to Canakkale, catch a ferry, then head over to Izmir and stop for the night in one of the Aegean Sea resorts. In those times, petrol was cheap and flights were prohibitively expensive.

While road trips have their special charm, today I’d choose a flight and probably rent a car at my destination. This is a more convenient way to travel, but it makes it difficult to visit both Ephesus and Troy on a day trip, as the two are separated by almost 400km of road.

If you want to visit Ephesus, you’ll need to set your base somewhere around Izmir. Kusadasi is very close to Ephesus. The ruins of the ancient city of Troy, however, are up north, close to Canakkale.

What you can do: book a few nights in Izmir. Here you can either rent a car or take a full day tour to Canakkale and Troy. Izmir is a beautiful city, so it’s also well-worth exploring.

Once you’re done, move over to the south, to Kusadasi. You’ll be very close to Ephesus, so you’ll have the chance to explore it whenever you’ll want.

If you have two-three weeks and a good car, you can take a road trip across Turkey starting from Istanbul, going to Canakkale (where you’ll also visit Troy), Izmir, Kusadasi, Selkuk (where you’ll visit Ephesus and the House of Virgin Mary), Bodrum, Marmaris, Dalaman, Fethyie, Olu Deniz (with a visit to Saklikent Gorge), Kalkan, Kas, Kemer, Antalya,  Belek, Side, Cappadocia, and then up again to Istanbul. I’ve done only portions of this route on different occasions, but I still dream about a bigger itinerary to include Turkey and Greece with their most impressive historical sites, landscapes, medieval towns, and white, sandy beaches.

Ancient Ephesus is very well preserved, so I’d say choose it over Troy, if you can’t visit both. However, Troy is one of the most important cultural heritage treasures in the world, so try to see it, too, if possible.

While Ephesus still looks like a city, with its Library of Celsius, its ancient public toilets, and its original roads still visible, Troy requires the heavy use of imagination to figure out the structures and the layout of the ancient city. There are a few ruins scattered all over the place, and a funny replica in wood of the Trojan horse. Climbing inside that Trojan horse makes the delight of children of all ages, so it’s probably a good opportunity for you to tell them a few facts about the Trojan war. Your kids will love a Troy visit, you can rest assured of that!

Here are some Ephesus photos. Spring and early summer are probably the best seasons to go to Ephesus, because of the lovely colors of the flowers. 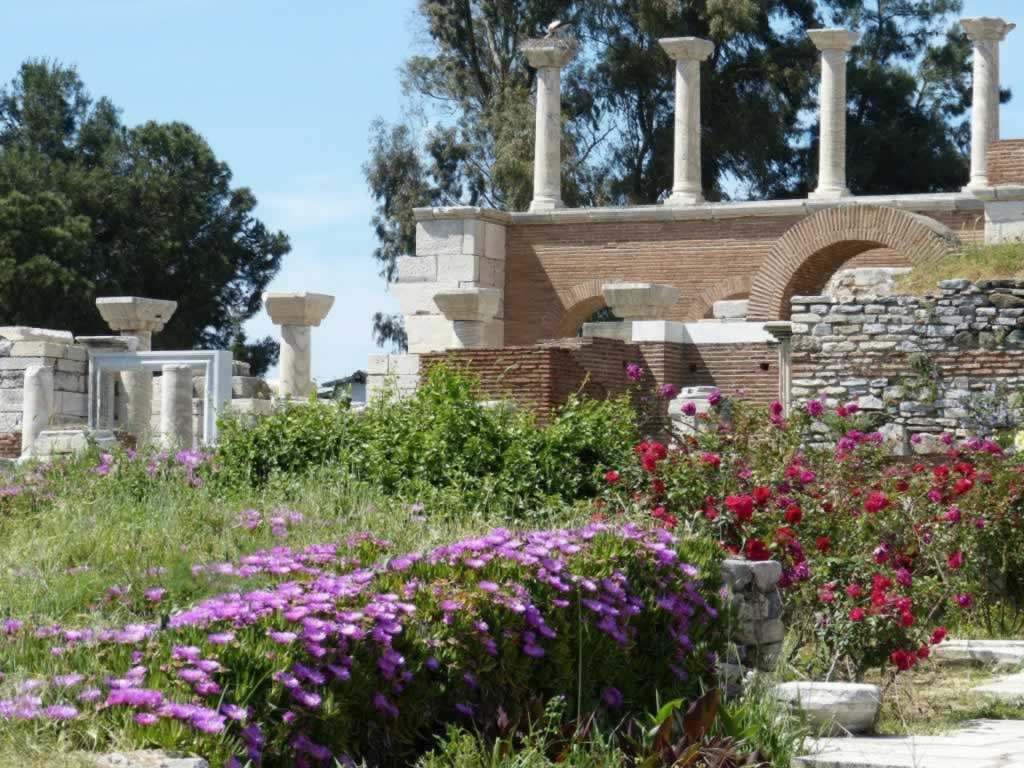 This aerial view of the amphitheater shows its massive size. The acoustic of such venues is impressive: you can hear a whisper of someone on the stage even from the last row. 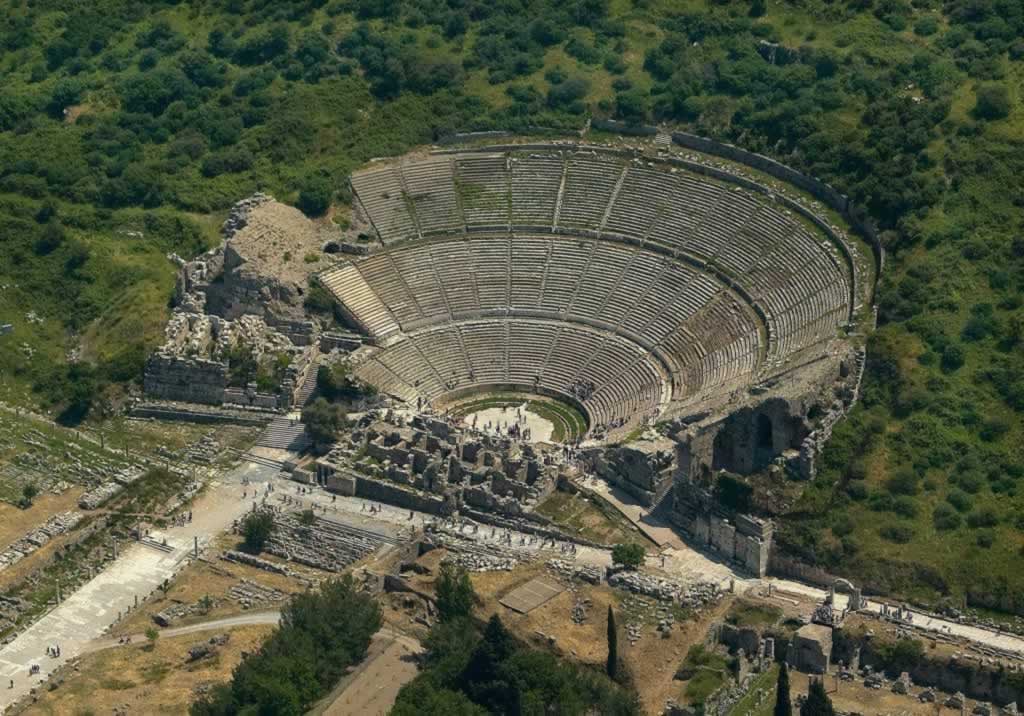 If you’ve been wondering whether Ephesus was Greek or Roman, you should know that it was initially Greek, but later on it fell under Roman occupation, as king Attalos of Pergamon left it to the Romans. In fact, the Library of Celsus and many other buildings in Ephesus as you can see them today were either built or rebuilt under the Romans, by emperor Caesar Augustus (Source: The History Channel).

I only have one photo of the ancient ruins at Troy, but I promise to update the page once I find my old photos (taken in the 90s, they are somewhere in one of my photo albums). 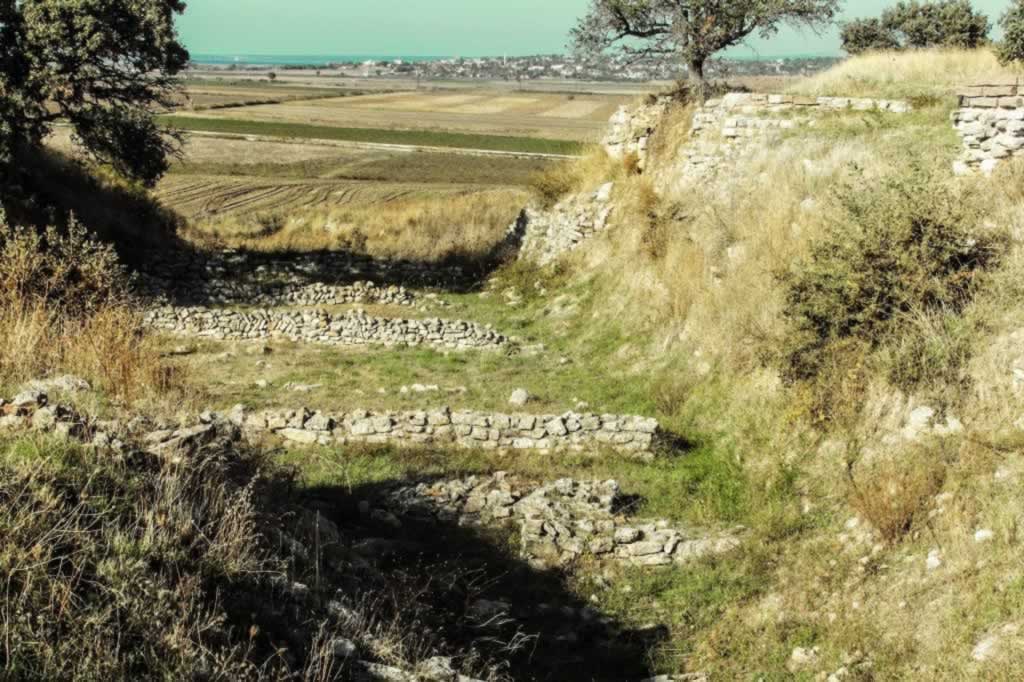 Here’s also a photo of the reconstructed Trojan horse at the entrance of the archeological site (courtesy of Pixabay like all other photos on this page). I didn’t climb inside this construction, if you were wondering. 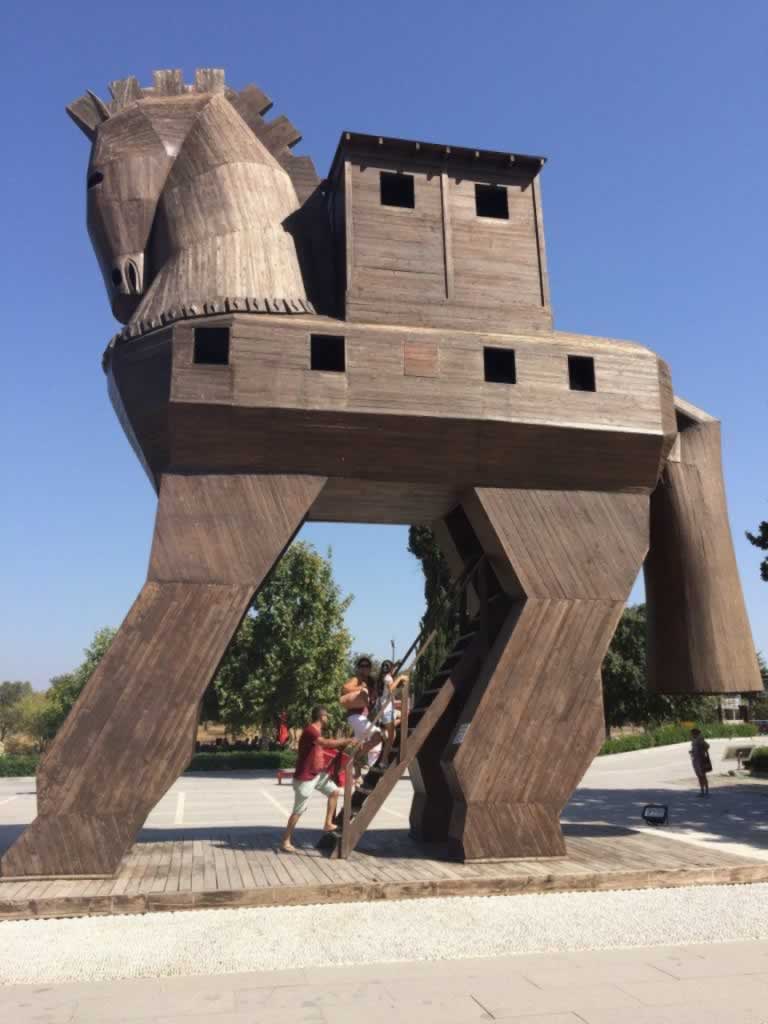 The archeological site of Ephesus needs a minimum two hours to visit, if you’re keen on seeing everything. If you are like me, you’ll probably spend a good while taking photos of the Library of Celsus from all possible angles. The Temple of Heracles will also take you some time to photograph. The ancient toilets are also fascinating. It is crazy to look at that massive marble slab with round holes and imagine those ancient Romans having a chat while sitting on the toilet, with a stream running beneath them, taking away their dejection day in, day out..

I think I’ve spent about four hours in Ephesus, but that’s because I do love such remainders of the past, so I tend to take my time to explore them thoroughly.

For Troy, I think that one hour would be more than enough. However, this depends on your interest for the site. If you already know a thing or two about the ancient city of Troy, you may find yourself spending two or even three hours there. Take a guided tour, if you can. If not, take at least an audio guide to listen to explanations on those ruins. This will help you gain a better understanding of the site.

The Turkey sun can be merciless. Wear a hat and a generous layer of sunscreen. Bring water with you, and perhaps some snacks. Wear good walking shoes and have your camera ready.

If you want to upload your impressions from Turkey on social media, consider buying a prepaid SIM card. Data transfers in roaming can get very expensive.

Pin this article to read it later: 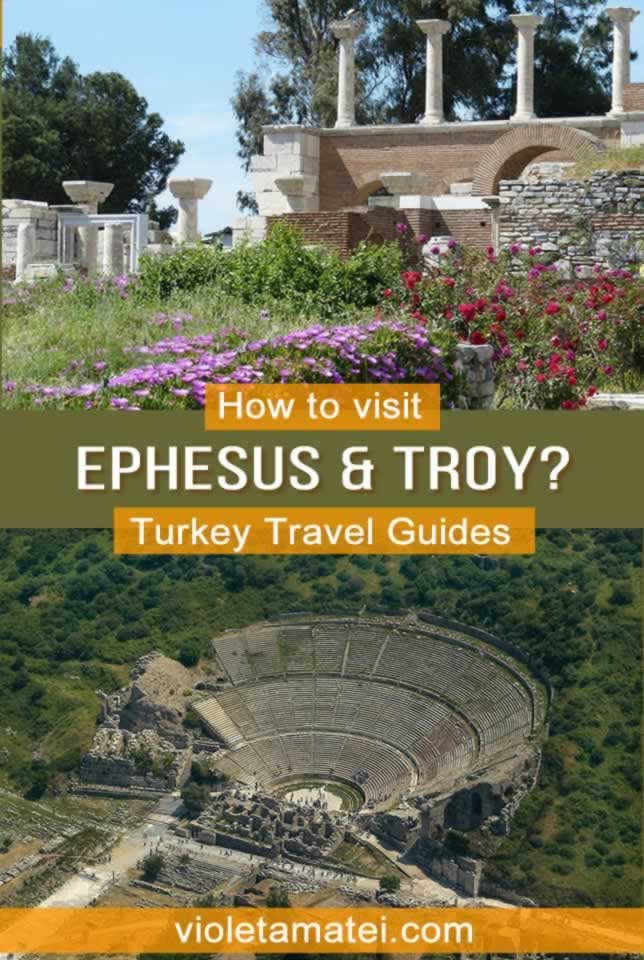