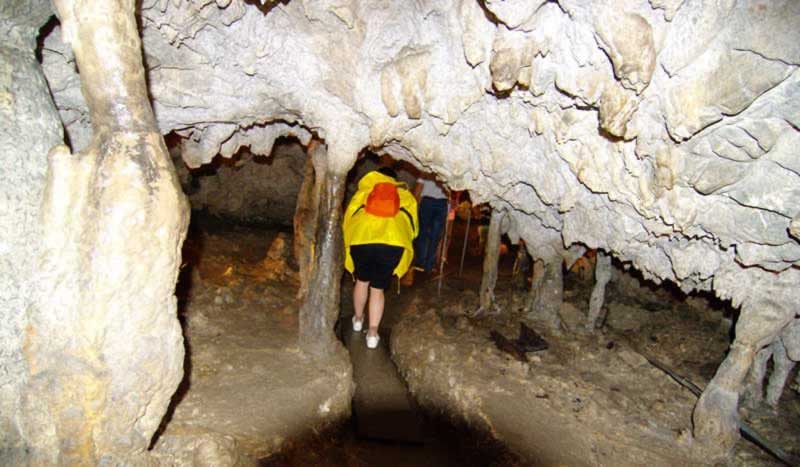 How would you like to live in a cave? As I’m writing this, the temperature outside is 37 degrees Celsius. Hot as hell (or almost). If you asked me, I’d be happy to live in a cave right now. Or at least to visit one, like Pestera Muierilor described below .

If you happen to be in the Gorj district, in South-Western Romania, and you have a day to spare, you could go see some caves. Pestera Muierilor (Women’s Cave), also known as Pestera Muierii, will provide you one hour of refreshment. The cave is in Baia de Fier, between Râmnicu Vâlcea and Târgu Jiu. I’ve visited it on my way back to Bucharest from a short vacation in Rânca, a ski resort in Parâng mountains. 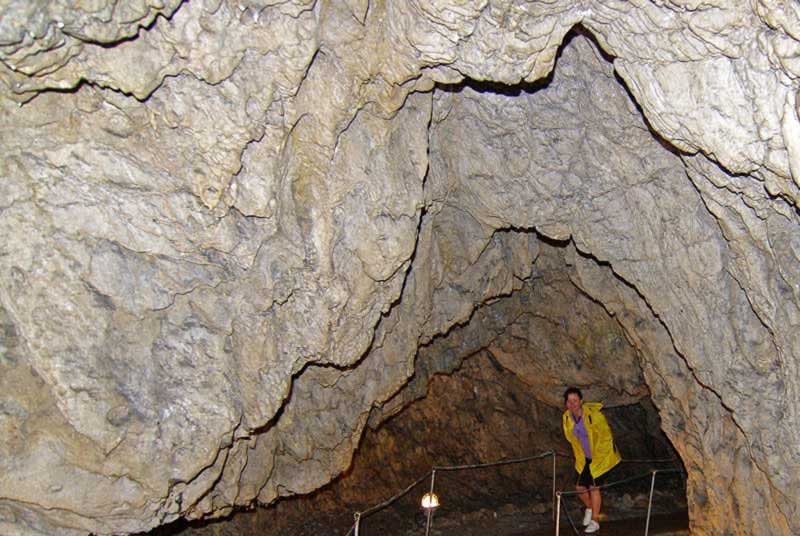 The name of the cave comes from the old times. Women and children used to find their refuge inside the cave at times of war, while men fought the enemies. The cave is hidden in the mountain and it has multiple entries, so it must have been served the shelter purpose very well. It is almost 4 km long. A small part of it is open to the public, but you can’t visit it by yourself. There are organized tours every hour. The guide leads the group and stops at points of interest to talk about what you see.

The cave has electricity; however, the lights are quite dim, so you better have an awesome camera to take good photos. Speaking of which, you are only allowed to take photos in certain places (the guide will tell you) and most of the times you can’t use the flash. They say strong light makes limestone stalactites and stalagmites change color to black.

There were many times when the ceiling was very low and we had to bend quite a lot to pass through. It was fun in the beginning, but I got pretty sore muscles the next day. If you have knee or back problems, it might not be a great idea to visit this cave.

The ceiling in Pestera Muierilor is low, so expect some exercise if you visit. 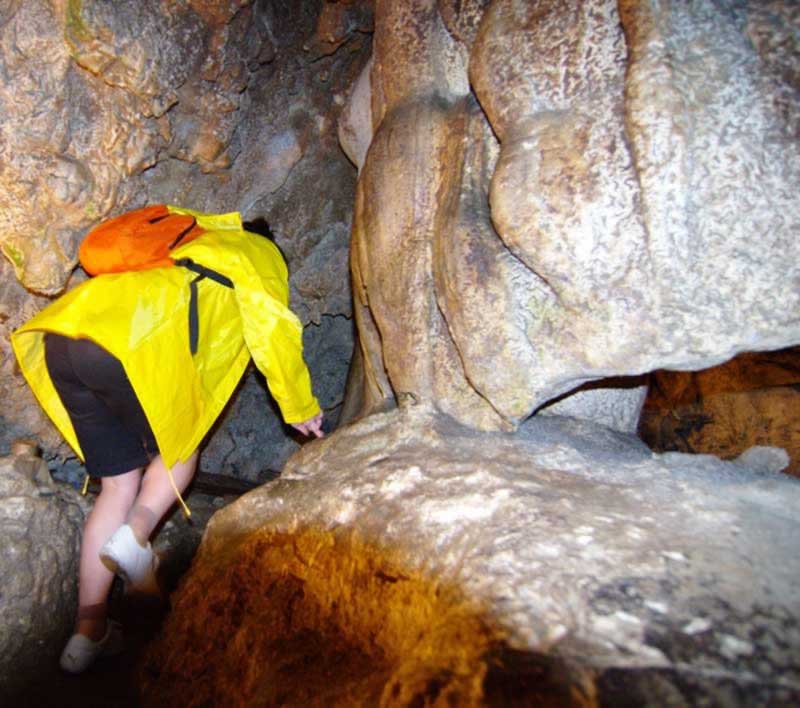 Narrow passage in Pestera Muierilor. I had to touch the limestone a bit, but I tried to use as little fingers as possible.

In Romanian, we call this type of walk “the midget walk”. I surely had enough of it for a lifetime.

Other times, we had to climb narrow metal ladders to advance to the next level of the cave. We were told not to touch the stalagmites, because they would go black. The water created funny shapes in the limestone, shapes named by the speleologists in various ways such as “The Organ”, “The Small Dome”, “The Turk”, “The Belly Dancer” etc. There’s even a “Santa Claus” rock in the cave. 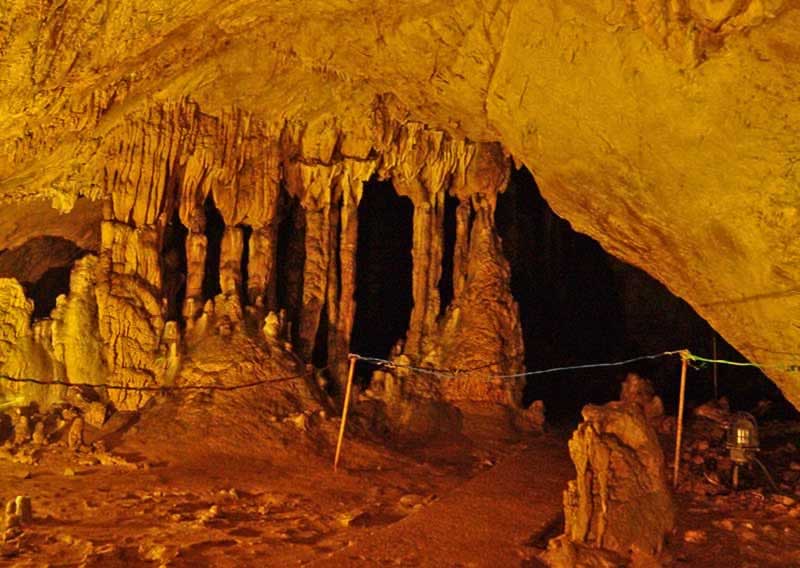 Pestera Muierilor – Here the stalactites and stalagmites united, resulting in this formation which was named by speleologists The Organ. 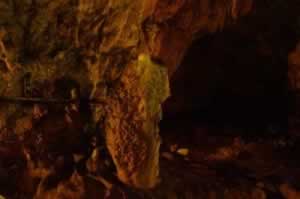 Pestera Muierii – The Turk
I’m pretty sure about this one. Look at the hat and tell me it doesn’t look like a Turk. 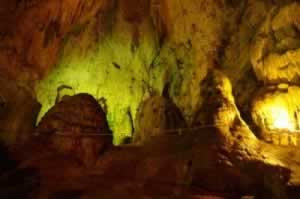 I can’t tell if what you see here are The Belly Dancer, Santa Claus and Who-Knows-What-Else, but they look cool anyway. 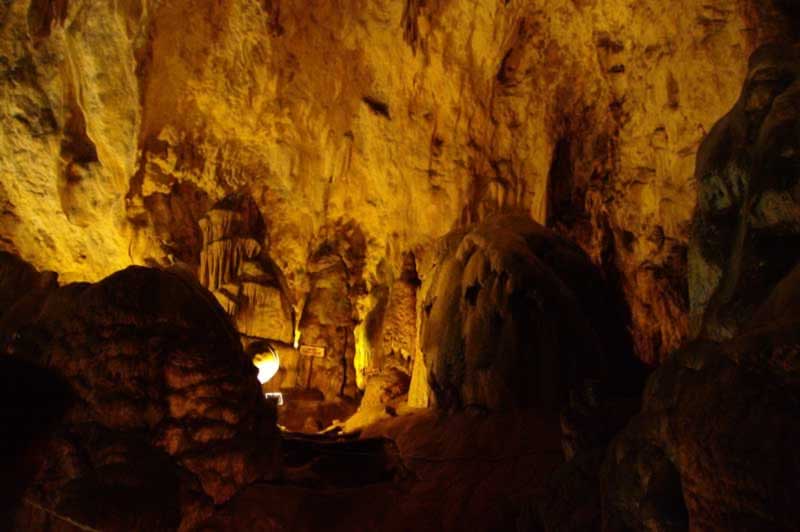 Santa Claus limestone formation in Pestera Muierilor. If you can’t figure out by yourself, Santa is the rock in the middle, where you can see a sign with some text on it. The text says “Mos Craciun”, which is the Romanian for Santa Claus.

One of the rooms in the cave is named “The Bears Gallery”, where 180 petrified bear skeletons were found. Here’s one of them, nicely arranged for the tourists 🙂 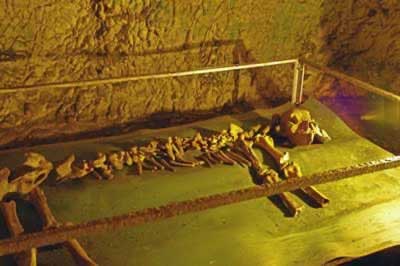 Bear skeleton reconstructed from bones found in the cave

Nothing is dangerous in Pestera Muierilor. You can even bring your kids with you. It might be even easier for them, because they are small and fit the narrow passages better. Besides, I bet they will be impressed by the so-called “Guano Hall”, which is a huge opening with the floor covered in a thick layer of guano. For those of you who don’t know what that is, guano is bat shit. The word comes from Quichua, the Inca civilization’s language. In Quichua, it translates as “sea bird droppings”. Guano is an excellent fertilizer, because it is rich in phosphates and nitrates. Don’t worry, you don’t have to step in it. Like in other areas of the cave, there’s a path built for tourists to walk on. 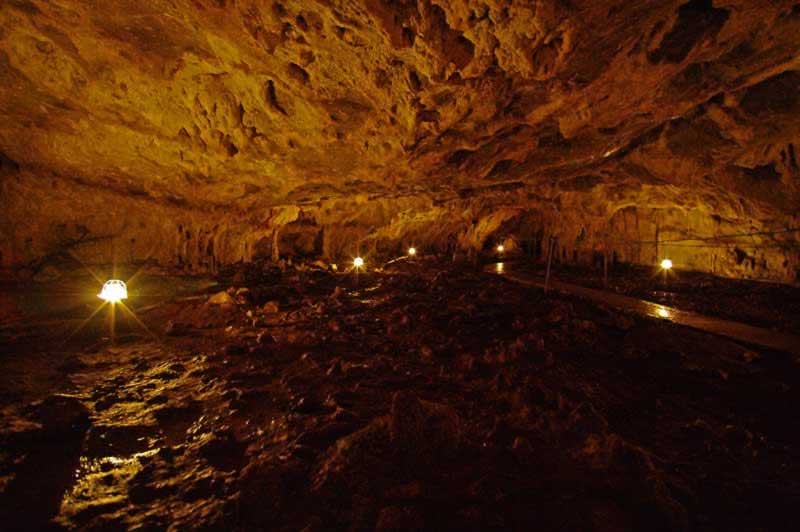 The Guano Hall in Pestera Muierilor – can you believe so much bat poo? It didn’t smell, by the way.

The exit is at about 1.5km distance from the entrance. You are not allowed to return through the cave, so you’ll have to walk back on the hill. It’s a nice walk, though, especially if you stop for a few minutes and let the rest of the group go. Otherwise, it can be a bit too crowded.

The other cave in the region is named Polovragi. I didn’t visit this one, but I thought you might want to know what else you can see in the area. If you are in Bucharest and want to go to these caves, keep in mind that it’s a four hour drive and only one quarter of it is on a motorway. It’s too much hassle for just two caves, but if you go to the mountains, it’s definitely worth stopping by.

The temperature in these caves is constant all year round. In Pestera Muierilor it varies between +7 and +12 degrees Celsius. If you visit during the summer, get some warm clothes with you, because outside you’ll probably have more than 30 degrees Celsius and this big difference can be quite shocking. 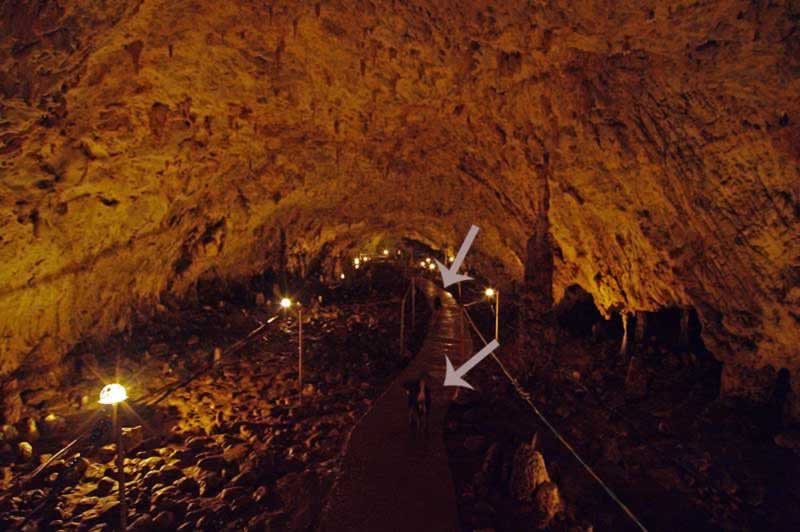 This is a funny one: during this tour the two stray dogs in the image followed us closely. It seems we can’t get rid of the “dogs of Bucharest” no matter where we go (if you spent more than two hours in Bucharest, you’ll understand what I mean)