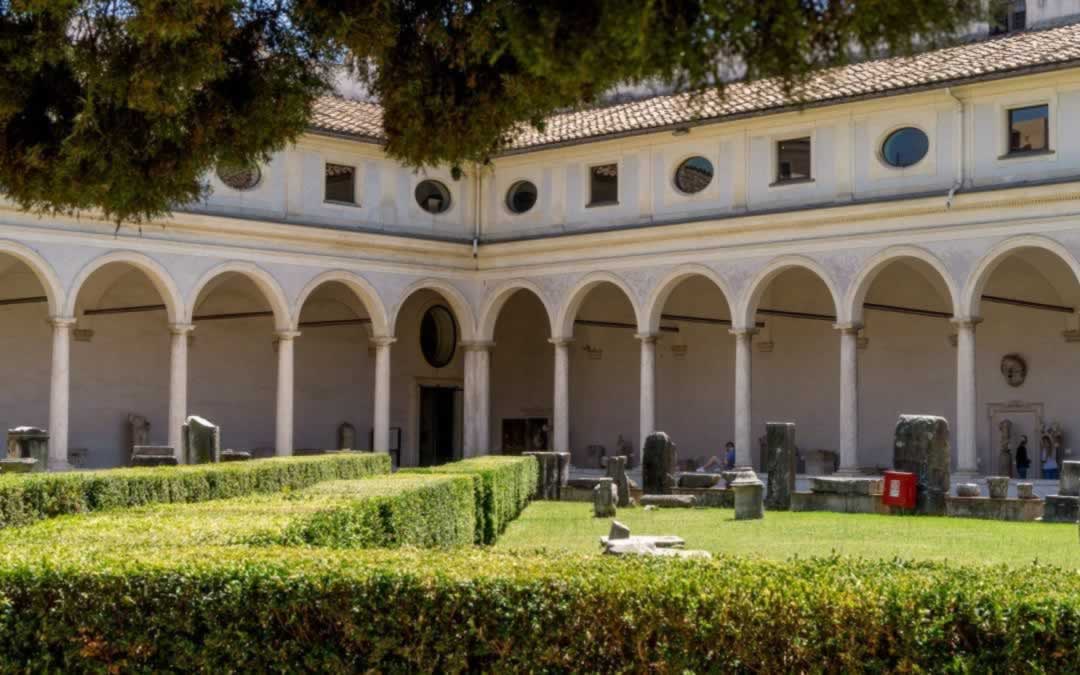 Built by Emperor Diocletian in 305 AD, on the Viminal Hill, the Baths of Diocletian were the biggest thermal complex in the Ancient Rome, meant to surpass the Baths of Caracalla by being able to accommodate twice as many people at once. Public baths were common during those times. Ancient Rome counted about 900 such venues where people came to clean themselves, but also to relax, to swim and to socialize. All these venues had similar structures, featuring a caldarium, a tepidarium and a frigidarium, as well as various other rooms dedicated to swimming, gymnasiums, gardens, theaters, and libraries.

The Baths of Diocletian served the ancient Romans for over two centuries, until Goth invaders cut the water supply in their attempt to conquer Rome. The destruction of the Aqua Marcia aqueduct led to the degradation and ruining of the structure, as there wasn’t any alternative water supply.

Later on, in the 16th century, Pope Pius IV decided to do something to honor the Christian slaves who died during the construction of Terme di Diocletiano and commissioned Michelangelo to erect a church on the ruins of the ancient baths. This is the Basilica of Santa Maria degli Angeli e dei Martiri, one of the most impressive churches in Rome. This monumental construction will enable you to understand the proportions and the size of the Baths of Diocletian. The church has been erected on the former frigidarium of the public baths. The vestibule of the church is the former tepidarium, and the entrance is part of the former caldarium. Pope Pius IV decided to demolish the rest of the caldarium, as it was interfering with his city development plans.

Initially, the fountain in front of the Santa Maria Basilica was part of the Baths of Diocletian complex. Today, the Fountain of the Naiads is still here, but it is in the center of Piazza della Repubblica. 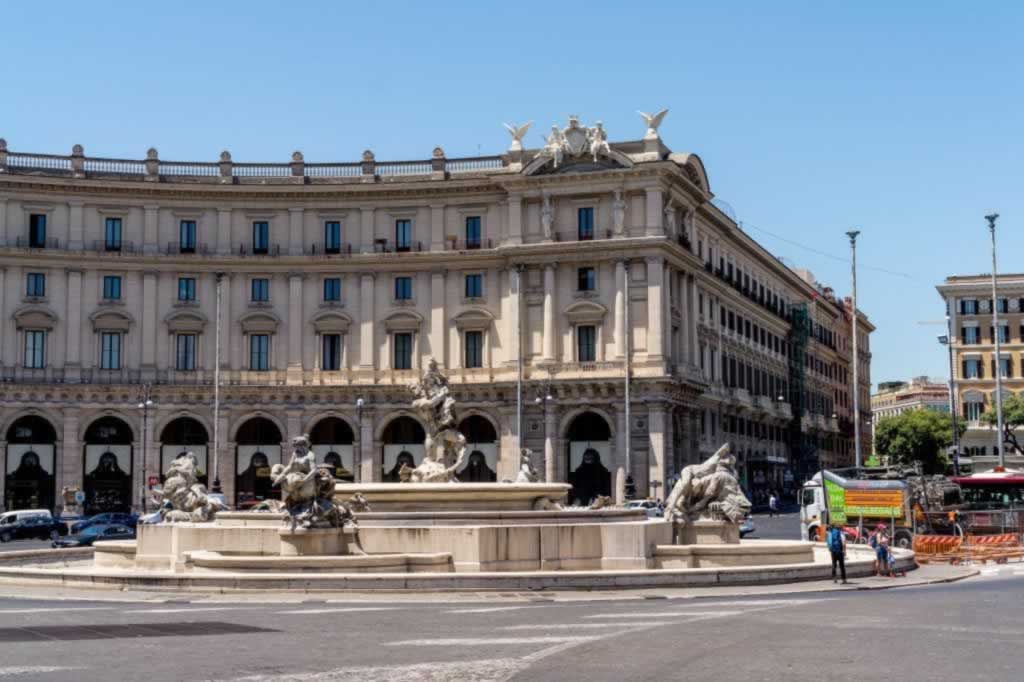 Where Are the Baths of Diocletian?

The Baths of Diocletian are located in Rome, on Viale Enrico de Nicola, 76, very close to the Termini train station and to Piazza della Repubblica. While this is not the best area to stay in Rome, some travelers may find it convenient, particularly if they want to take lots of day trips around the city.

As you stand outside the train station, with the huge bus parking lot on your right side, keep walking until you see a giant fountain in the middle of a square. This is Piazza della Repubblica, with the Fountain of the Naiads. The entrance to the Baths of Diocletian is on the right side. You’ll find it after you pass the Basilica of Santa Maria degli Angeli e dei Martiri, a huge construction made from red bricks. The complex is so big that it’s impossible to miss. 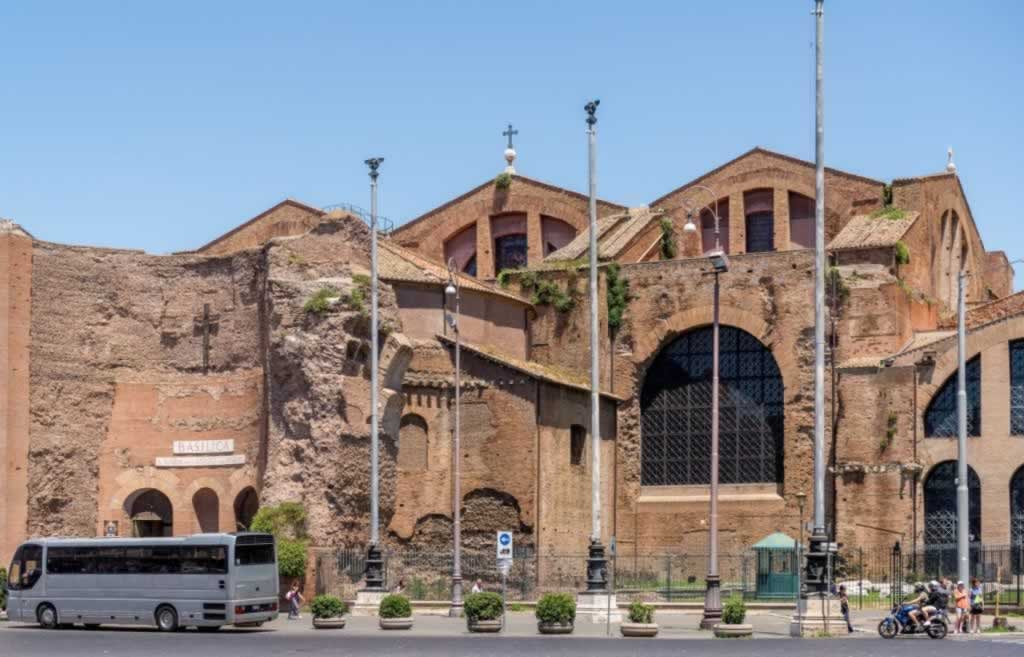 If you get to Rome via either Fiumicino Airport or Ciampino Airport, and you take the bus to the city center, you’ll arrive to the Termini train station. Most probably you won’t want to visit anything just yet. However, keep in mind that this spot is close to two of the four venues of Museo Nazionale Romano, Baths of Diocletian and Palazzo Massimo alle Terme.

The entrance to Santa Maria degli Angeli e dei Martiri is free. You can enter to cool yourself and to admire some beautiful wall paintings and La Meridiana, the meridian line, an annual sundial that marks the victory of the Gregorian Calendar. Today, the meridian clock still works with excellent accuracy. It is also a very beautiful work of art in bronze and white marble. Here are a few images and the full story of this sundial. 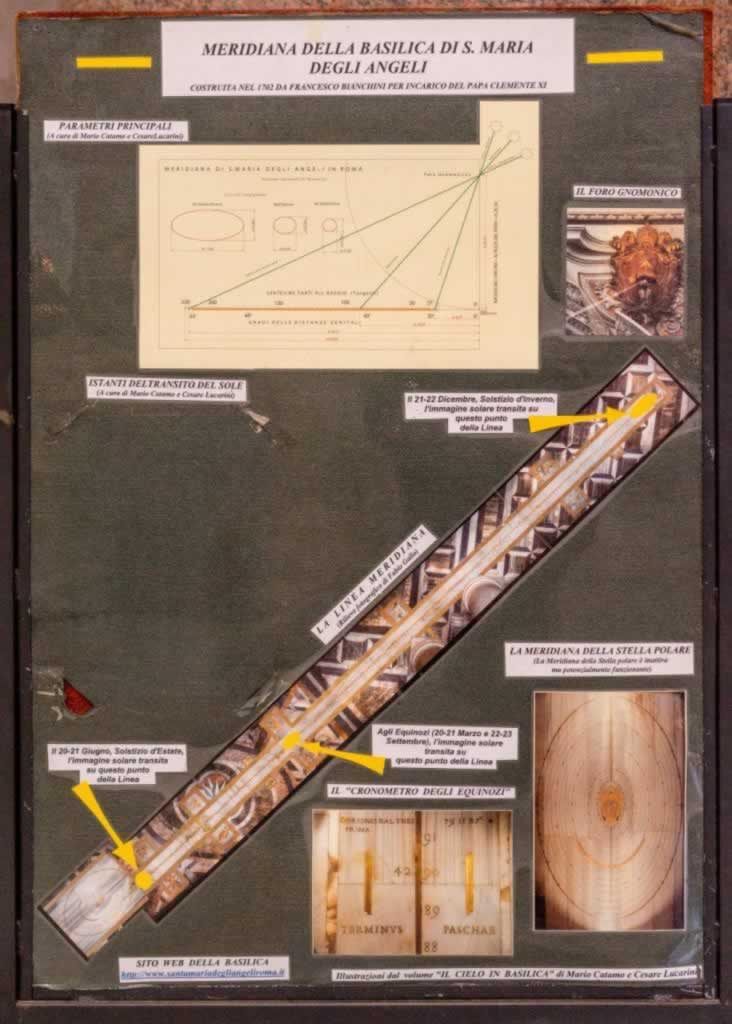 The church itself is very beautiful. The paintings and the adornments, the green marble pillars and the worship items will keep you busy for quite a while. 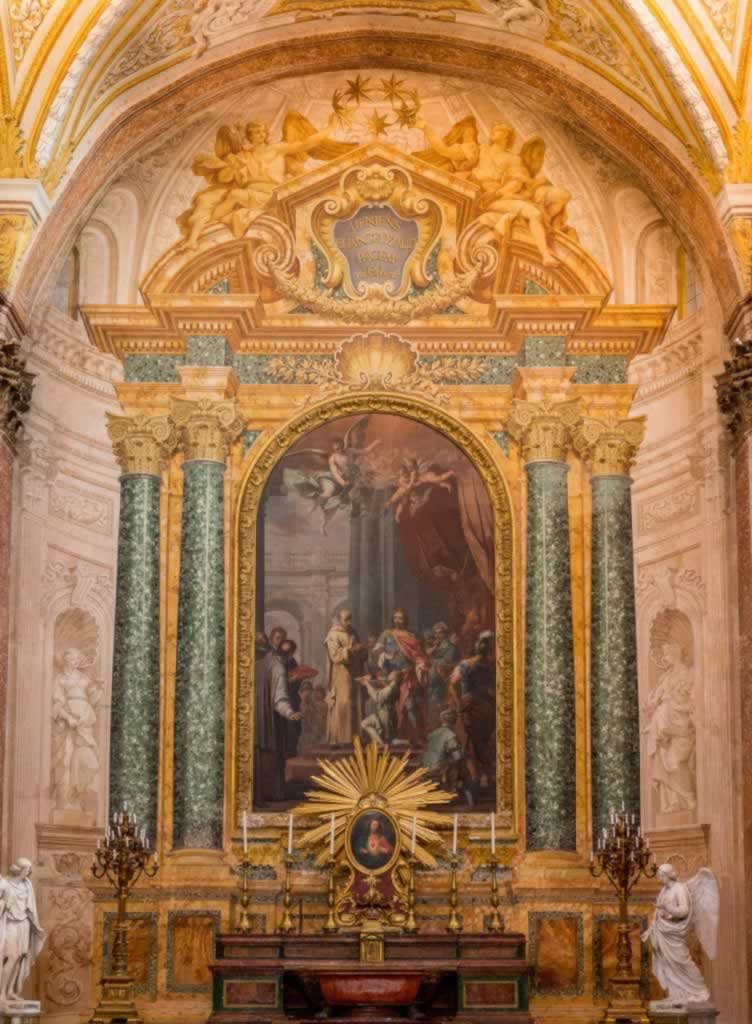 How to Get to The Baths of Diocletian by Public Transport:

Bath of Diocletian Today – What To Expect

This is one of the museums in Rome I’d visit over and over again. Here I found a peace and a serenity that made me sit and relax for about two hours, although one hour would be enough to visit the museum. 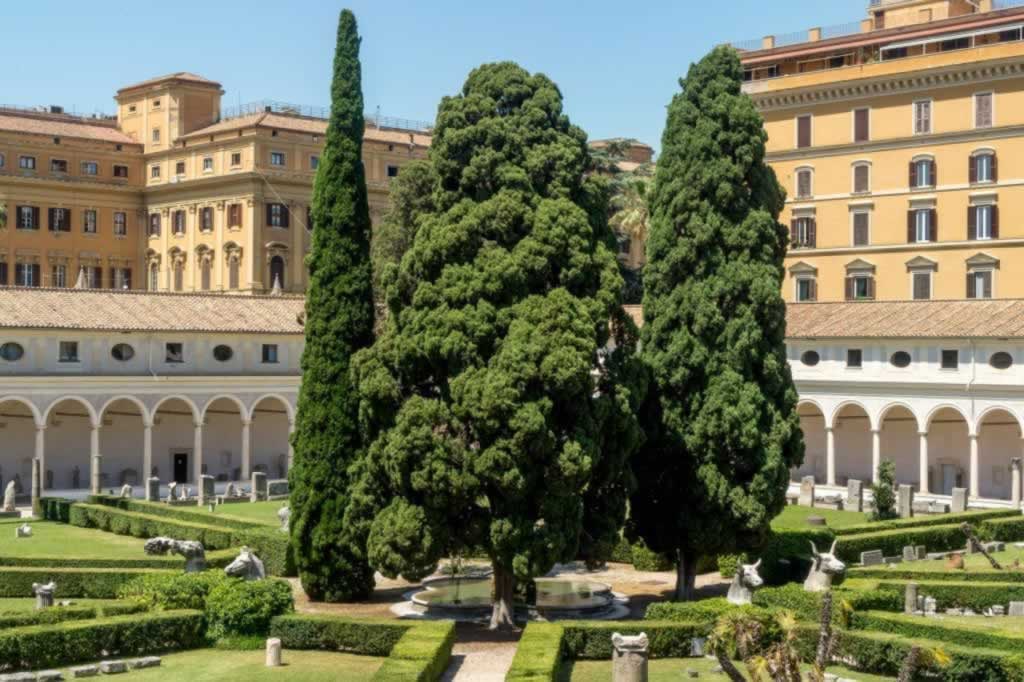 The interior yard is an oasis of peace and calm. As there are barely any visitors, you’ll have the chance to spend some time with yourself, in the company of chirping birds, lush green trees and ancient stone artifacts. There’s even a big fish in the little pond in the center of this yard. 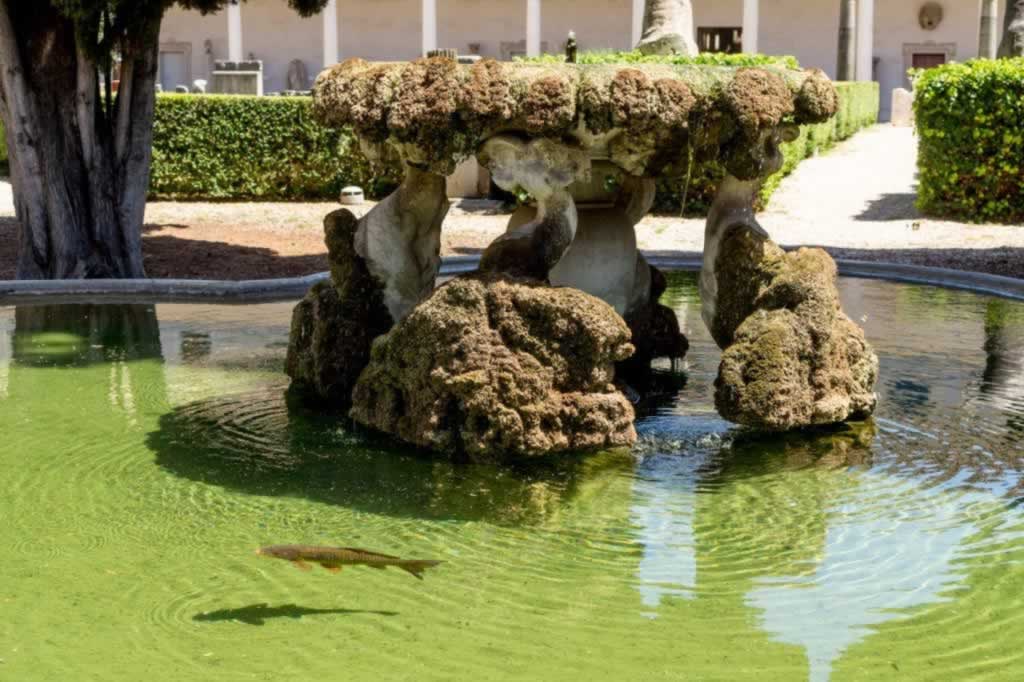 The collections in this museum are nothing short of impressive. You’ll see amazingly realistic sculptures, old mosaics, coins, jewelry, and many other ancient artifacts. Museo National Romano did a great job in gathering all these items and bringing them together under one roof.

The colossal animal heads of Michelangelo’s Cloister are also here. The ram, the camel, the horse, the bull and the ox heads were found in 1586 during the reconstruction works of Palazzo Zambeccary, meant to become the residence of Cardinal Michele Bonelli. The Cardinal had found these sculptures in the Trajan Forum. He used them to decorate his palace, together with the rhinoceros and the elephant heads.

The fountain of the garden was built in 1695, but the animal head statues were added only in the beginning of the 1900s. 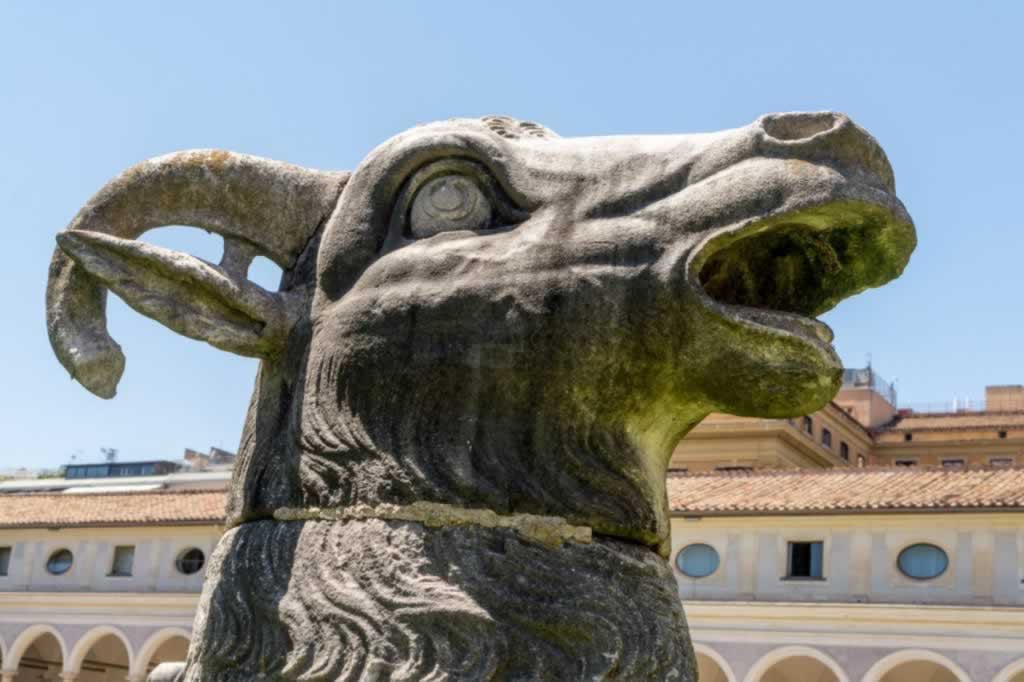 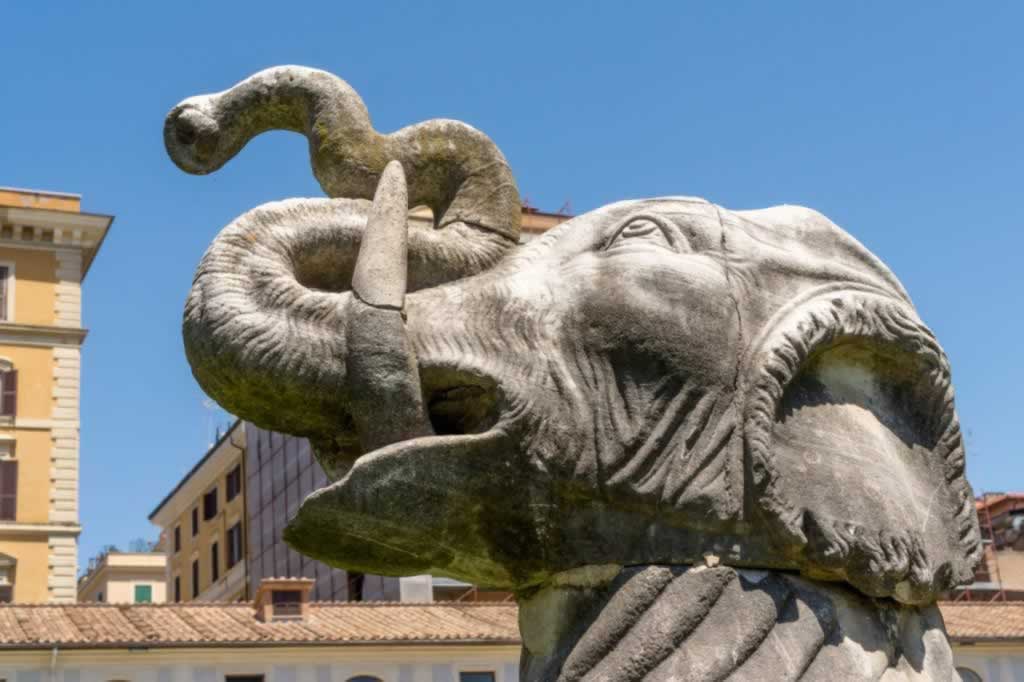 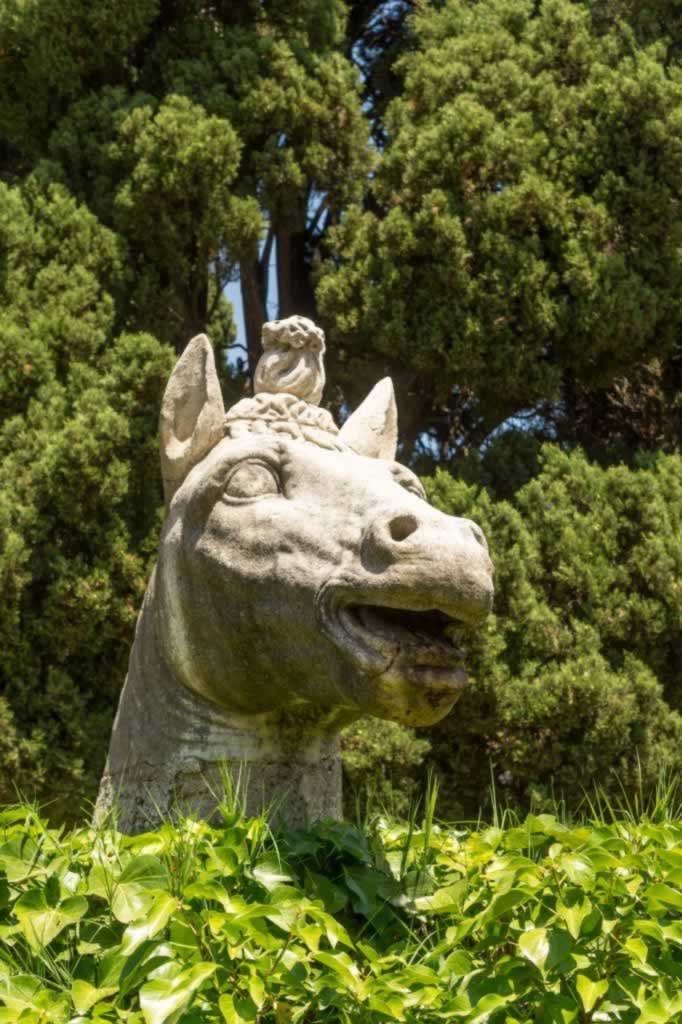 The Ancient Roman Artifacts, the Statues and the Oldest Christian Sign

Before visiting the Baths of Diocletian, I expected to find here the ruins of an ancient spa, with signs of what once were the floors, the walls and the rooms of an ancient public bath. Instead of all these, I found some astonishing artifacts, statues, a peaceful backyard and one of the most ancient Christian inscriptions in Rome, the funerary stele of .Licinia Amias featuring the expression “fish of the living” written in Greek. 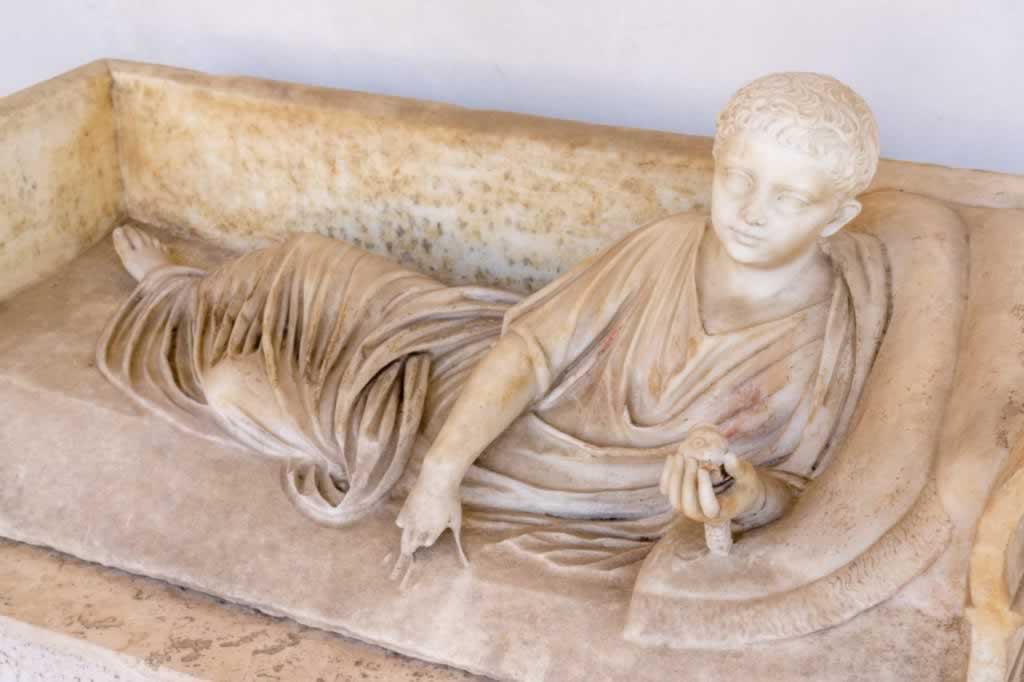 What about this old couple? 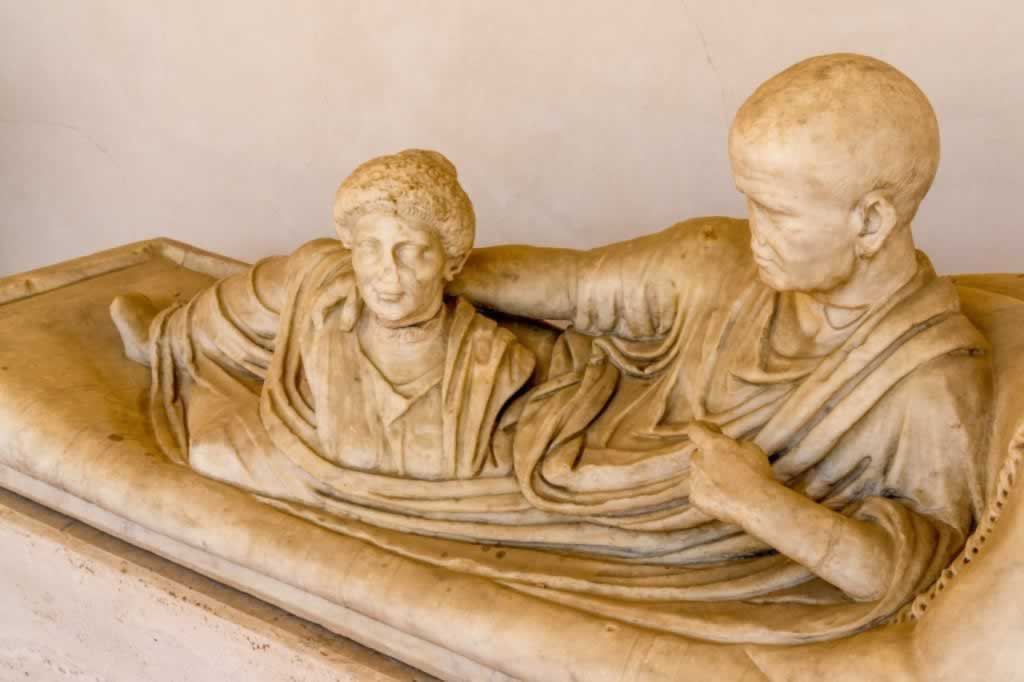 This is the ICHTUS (fish of the living) Christian inscription I’ve mentioned above. 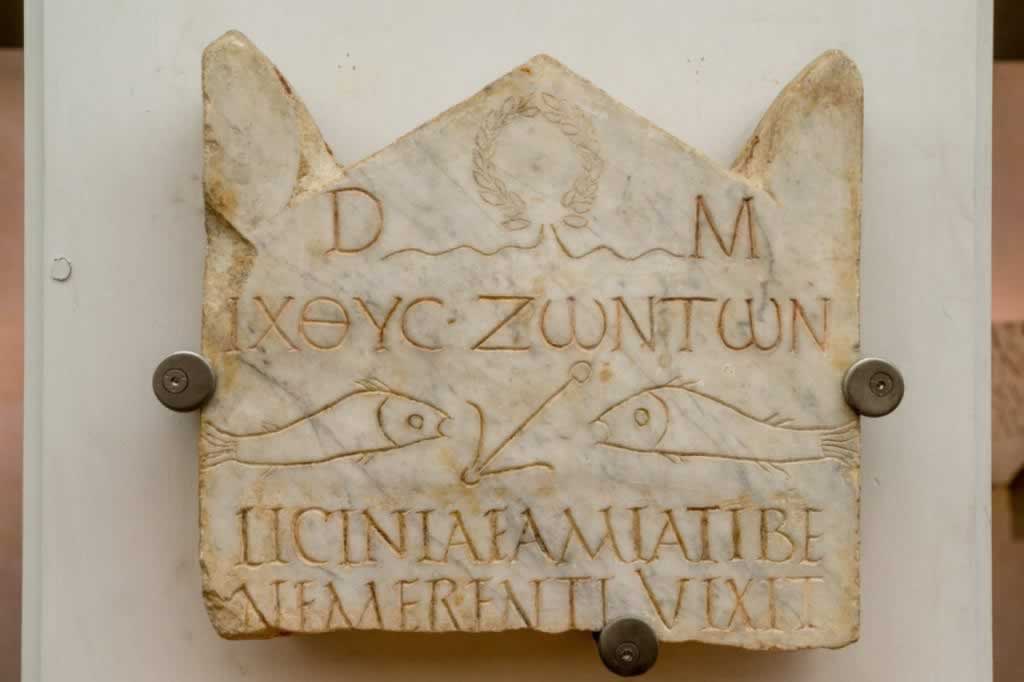 This used to be the mirror of one of the beautiful women in ancient Rome; isn’t it lovely? 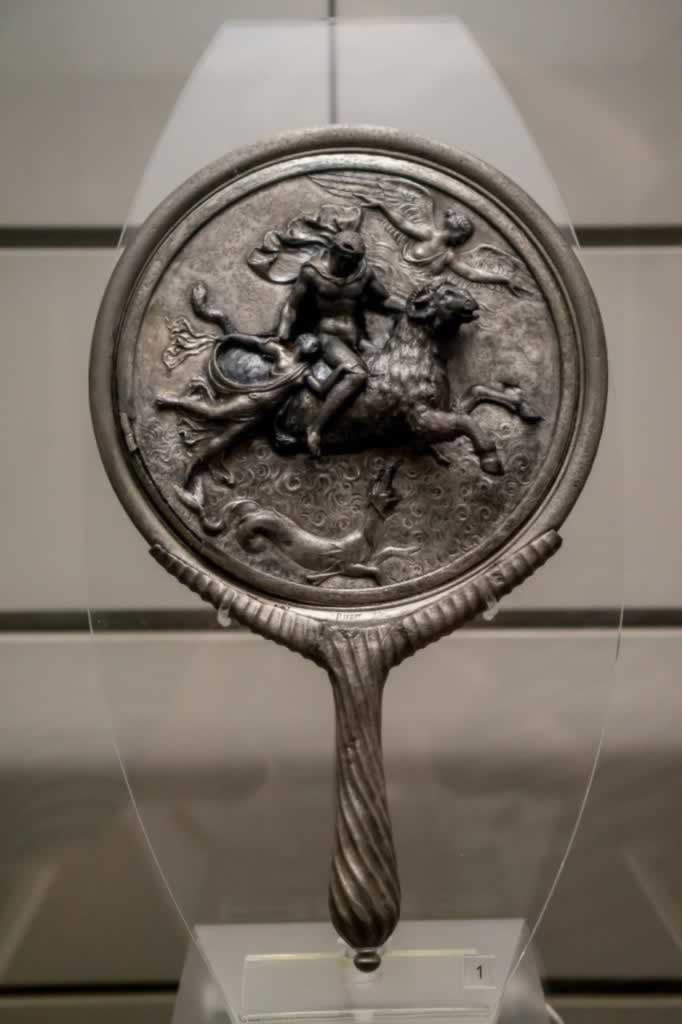 How To Visit the Baths of Diocletian in Rome

Today, the Baths of Diocletian belong to Museo National Romano, together with Crypta Balbi, Palazzo Altemps (with its stunning Ludovisi Battle Sarcophagus) and Palazo Massimo alle Terme. All four museums are worth a visit, because they can help you make yourself an idea about Ancient Roman architecture, the layout of the city and its evolution through centuries, and about the social life of the inhabitants of the Roman Empire.

You can buy your ticket for all four museums belonging to the National Roman Museum from any of them. As of June 2019, the ticket was valid for three consecutive days, and its price was 12 Euro. You can buy tickets online, as well, but you’ll have to pay 4 Euro booking fee. I’ve visited Rome by the end of June, and there was no line at any of these four museums, so I’d say you save the 4 Euro booking fee to buy yourself a nice gelato.

Have some water with you, but keep in mind that in Rome water is more expensive in shops than in the National Roman Museum. In the Baths of Diocletian you’ll find a water and soft drinks dispenser where the water costs less than half the price in shops in the central area.

The toilets in the baths of Diocletian are very clean. There is everything you need, so you don’t have to bring your own paper towels.

If this is your first time in Rome, schedule the Baths of Caracalla early on, as this is one of the best preserved structures from the Roman Empire. You’ll have a better representation of the true size of these giant structures, with their swimming pools, gyms and other amenities meant to pamper the people living in Rome during ancient times.

Why the Baths of Diocletian Are Worth Visiting

Spend a few days in Rome and you’ll start to understand that recycling is actually a very old practice. Ancient Romans used and reused monuments, buildings and catacombs throughout centuries. Popes erected their palaces on the ruins of funerary monuments and used the ruins of old public baths to build churches. Modern Romans have used what was left of the Baths of Diocletian to create a museum where they gathered artifacts from all over Rome.

When you first come to Rome, you may be afraid of having to put up with the crowds. Everybody says that Rome is packed with tourists during June-September, so you may not expect to find such as relaxation oasis where to spend a lovely couple of hours in the company of birds, fish and ancient artifacts.

Here’s a lecture that shows the architecture of the Baths of Diocletian, as well as a description of all rooms and functions of this type of complex in ancient Rome:

If you don’t want to read about the structure and the functions of public baths in Ancient Rome, you can get an audio guide to listen to these explanations as you go.

If you’d rather take a guided tour of the Baths of Diocletian and Santa Maria degli Angeli e dei Martiri Basilica in Rome, check out this one, here.

You don’t have time to read now? Pin this article for later: 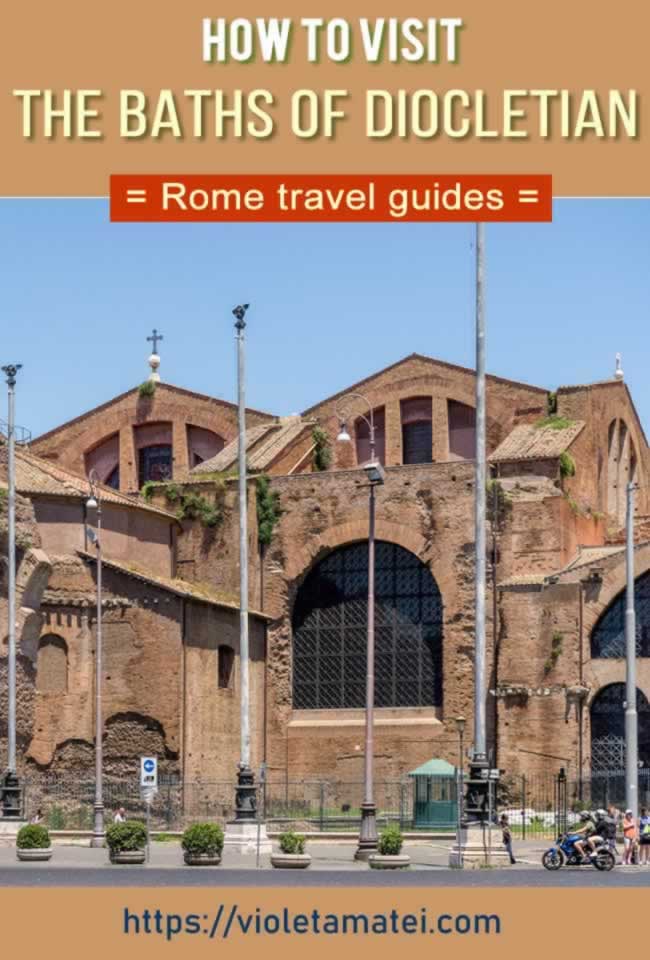 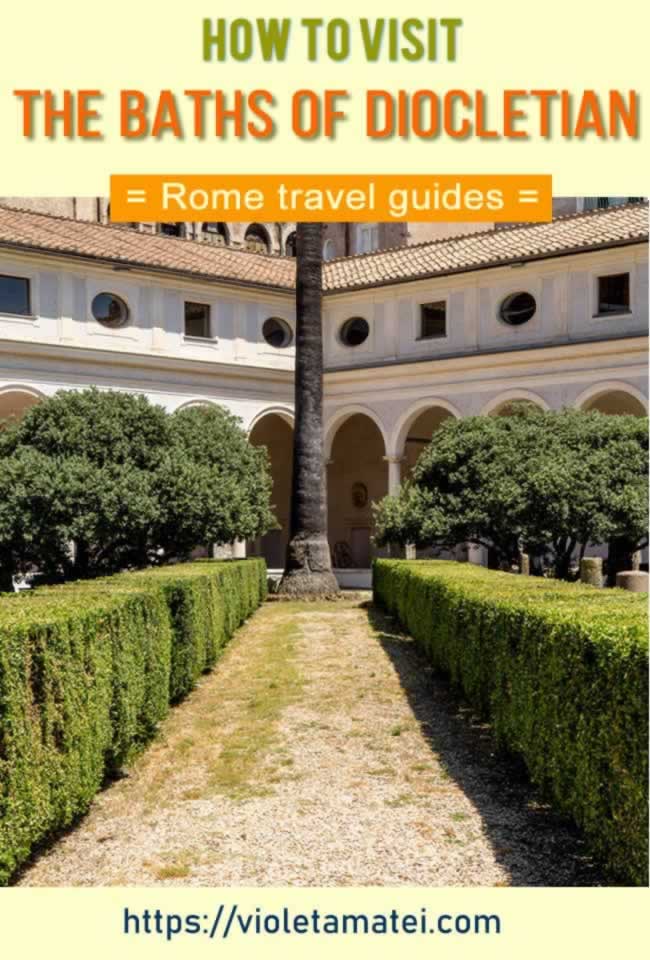