Home | Italy | Ludovisi Battle Sarcophagus – How To Find This Roman Battle Scene and Why Visit?

Ludovisi Battle Sarcophagus – How To Find This Roman Battle Scene and Why Visit? 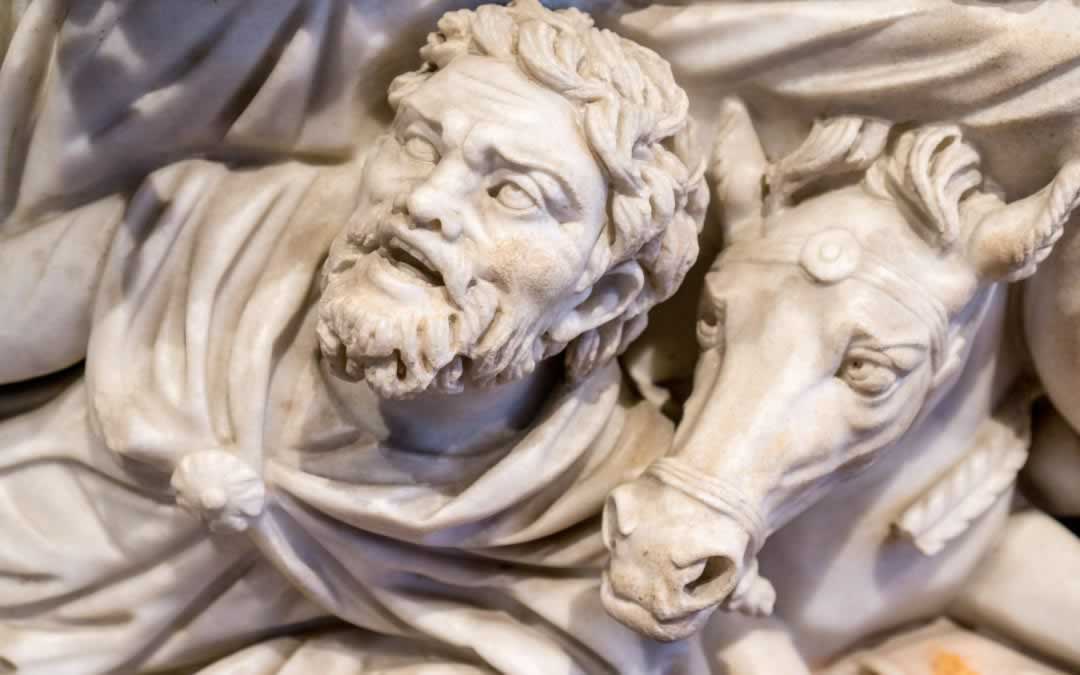 The Ludovisi Battle sarcophagus can be found in Rome in Palazzo Altemps, which is part of Museo National Romano (The National Museum of Rome). Named after Ludovico Ludovisi, the sarcophagus depicts a battle of Romans and barbarians. It is a memorial of this Rome battle scene that took place in mid third century. Discovered in 1621 in a tomb nearby Porta Tiburtina in Rome, the Grande Ludovisi sarcophagus is also a remarkable piece of art, a Roman sarcophagus relief featuring amazing details. 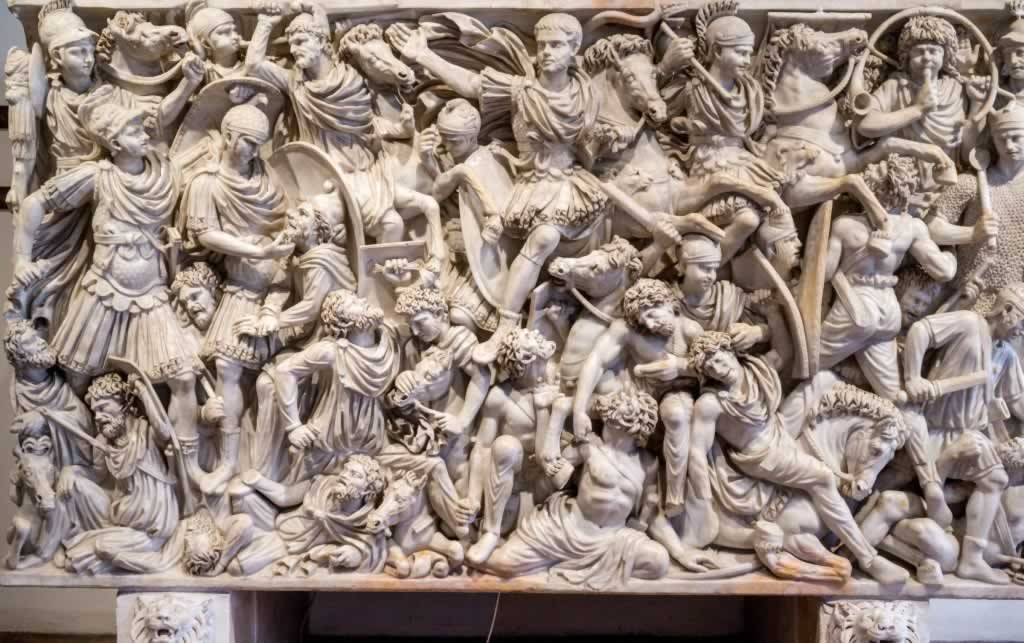 Palazzo Altemps is one of the four venues of The National Museum of Rome, together with Crypta Balbi, Palazzo Massimo alle Terme and the Baths of Diocletian. After one full week of exploring the remains of Ancient Rome, the Ludovisi Battle sarcophagus was still high on my “top things to see in Rome” list.

Where Is the Ludovisi Battle Sarcophagus? 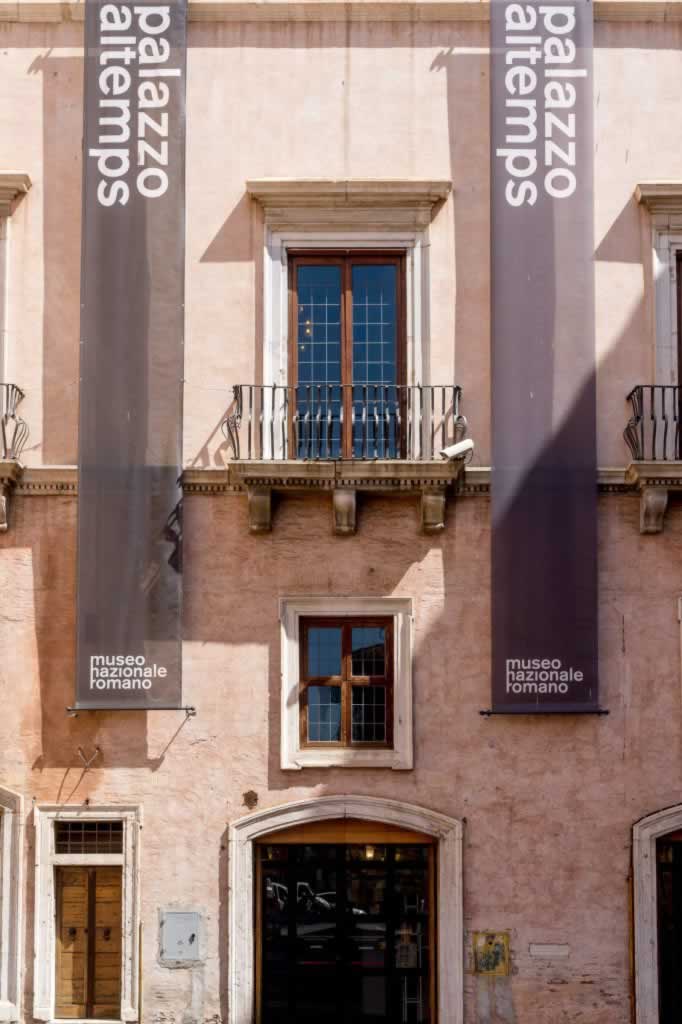 It matters less where in Palazzo Altemps this sarcophagus is located. You’ll love each and every room of this museum, I promise you that. When I visited it, Palazzo Altemps was full of art students sitting on the ground, drawing. Those magnificent statues were their models. Apart from the art students, there were barely any visitors. I was happy to have all those beautiful things to myself for hours.

Why Is the Ludovisi Battle Sarcophagus Important?

I had no idea that there was a Ludovisi battle or that someone created this sarcophagus depicting Romans and barbarians during a fight. However, this sculpture fascinated me at a glance, making me want to know more about this battle and about all famous Roman battles for that matter.

The Ludovisi Battle sarcophagus is important from both historical and artistic point of view. First of all, it depicts a battle of Romans and barbarians. It is a memorial of this battle that apparently took place in mid third century. Discovered in 1621 in a tomb nearby Porta Tiburtina in Rome, this sarcophagus is one of the best proofs of the artistic trends of its time. It also shows how political messages were conveyed in those times.

How To “Read” the Battle Scenes on the Sarcophagus?

Three Roman soldiers are more prominent than the other characters. In addition, the one in the middle of the scene has an X on his forehead. The meaning of this cross sign was that the guy belonged to the Mithraism cult. Apparently, he was a general in the Roman army. Among all Roman soldiers depicted in this scene, he is the only one who doesn’t wear a helmet. This means he was invincible.

All barbarians have their faces changed with fear. Even their horses look exhausted and horrified. Romans, on the contrary, seem to have the satisfaction of a job well-done. Also, they are bigger than barbarians, and they are grouped in the upper part of the relief. Their victory is imminent and obvious. 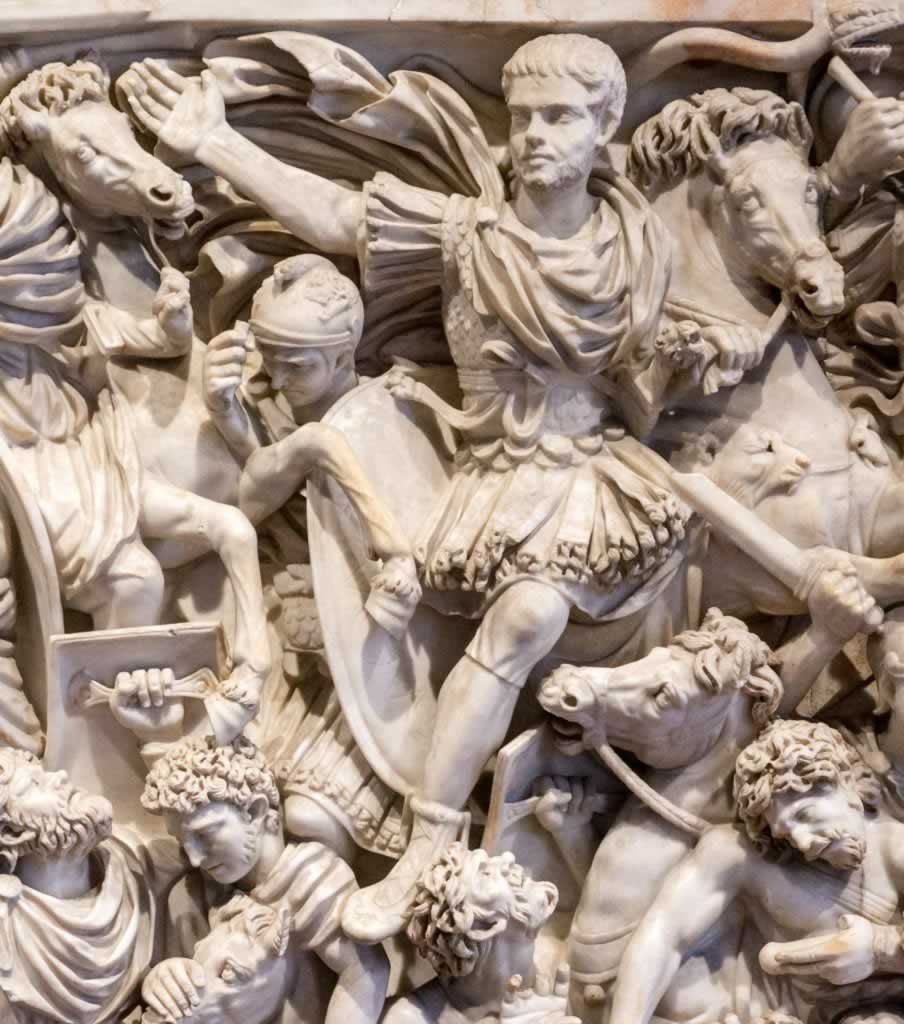 Who Created The Ludovisi Battle Sarcophagus?

The creator of the sarcophagus is unknown. This sculptor did an amazing job at carving this battle scene using a single block of Proconnesian marble. The deep relief technique creates a strong impact on the viewer. In some parts of the scene, characters are on multiple layers. It surely impressed me with its realistic appearance. You look at those Romans and barbarians and you see emotions on their faces. You look at those horses and you see their exhaustion and fear.

Look how realistic the broken spear in the photo below looks. Look at the details of the hand holding the shield. I wonder how much time it took the artist to carve out this scene. 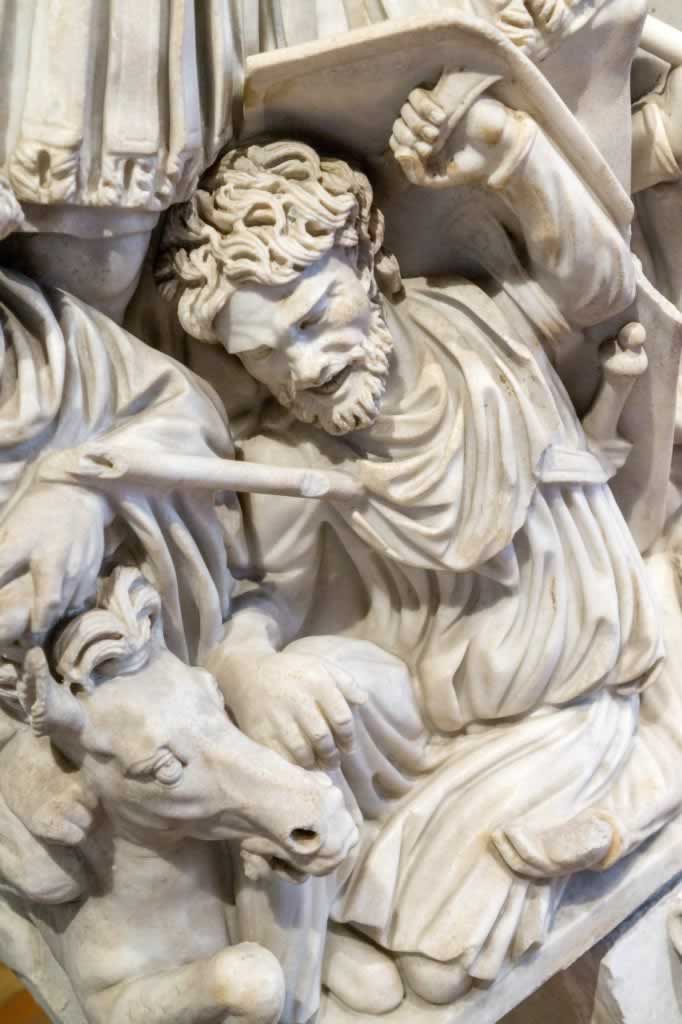 It is unbelievable that someone ordered this amazing piece of work only to serve as burial monument. I’d use it as a fireplace in my living room at any given time.

Why Should You See the Ludovisi Sarcophagus?

Apparently, this intricate sarcophagus was commissioned by a very rich person, as such a big marble piece and such a skilled sculptor didn’t come cheap. The way some of the details detach from the scene is amazing. Just look at those ropes and horse heads and tell me they are not stunning. 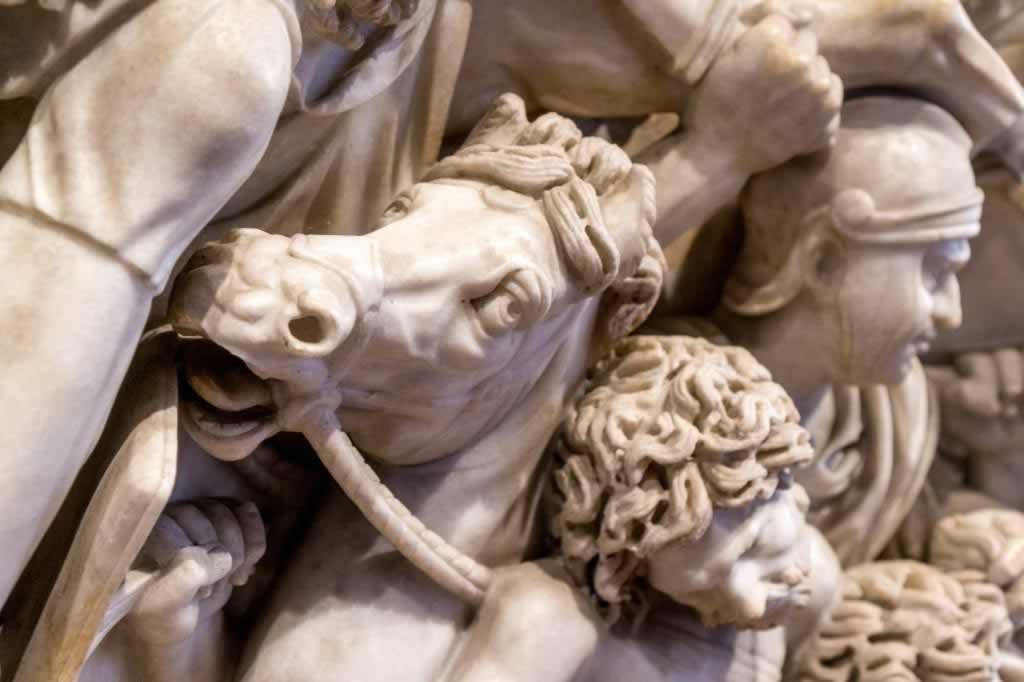 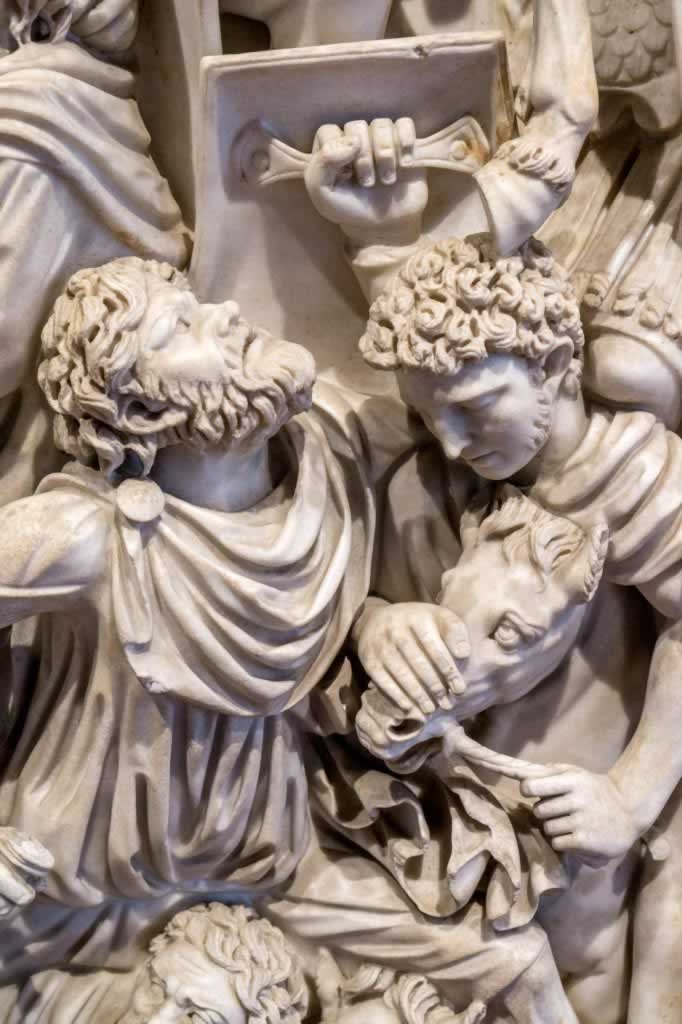 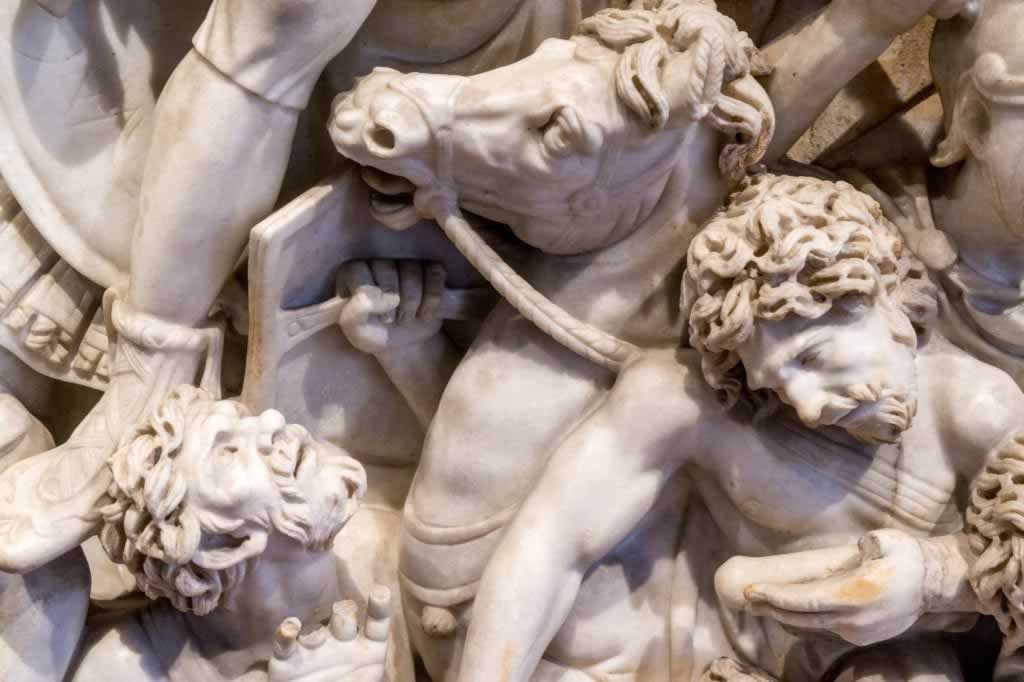 This battle between Romans and Ostrogoths doesn’t bear any specific name; Ludovisi is the name of the family that bought this sarcophagus.

The Ludovisi battle sarcophagus is a detailed history book page that tells the story of one of the victories of Roman soldiers against barbarians. At the same time, it is a proof of the artistic skills of sculptors in the 3rd century CE.

If you go to Rome, make sure you visit Palazzo Altemps. You’ll probably need about three hours to enjoy all its rooms, the interior courtyard, and all those beautiful statues and works of art. The Ludovisi battle sarcophagus is only one of the countless wonders in this museum.

Pin this article for later: 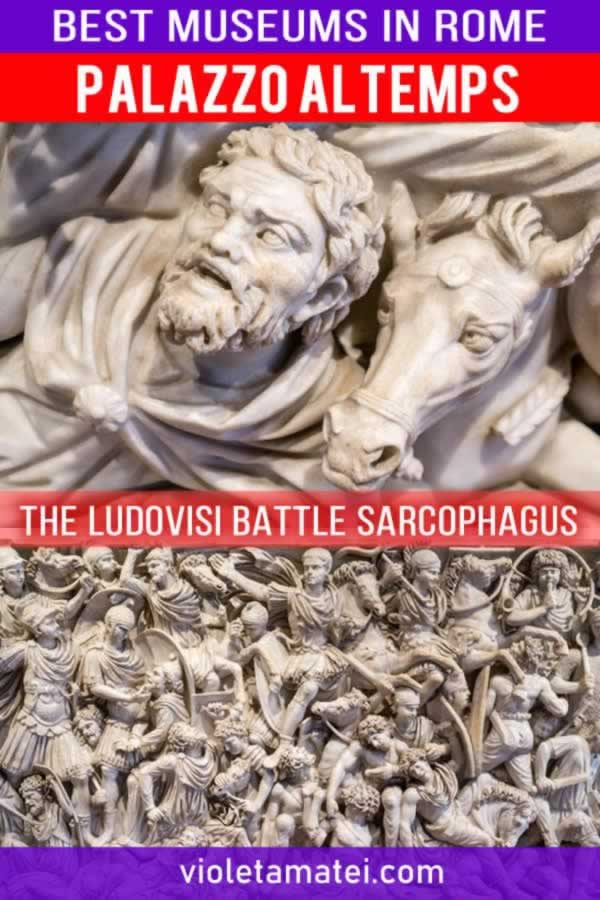 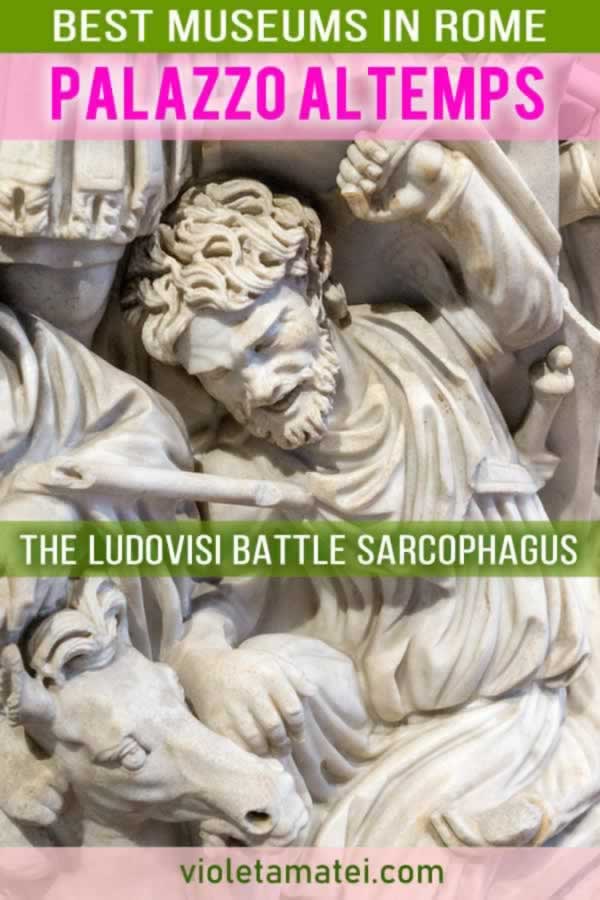