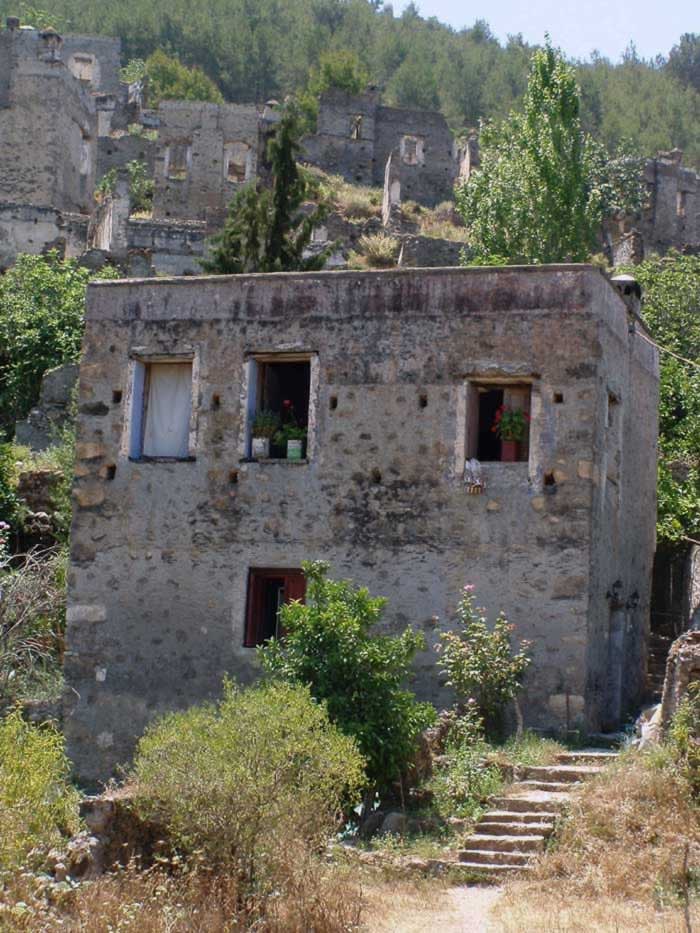 She was almost blind. Her myopia was so advanced that she had to stick her nose into a book to be able to read. Despite her thick glasses which looked like two jar bottoms, she was one of the most smiling and optimistic in our class, if not in the entire high-school. One day she came to school with a red brick wrapped in a dirty cloth. “This is from our house” she said, choking with tears. Like her grandmother and like her mother, she was born in that house, which has just been demolished by the government, to build who-knows-what instead. Many families living in that neighborhood were dislocated from their homes in those communist years and forced to live in apartment buildings which were anything but nice. I can understand the point of view of those who don’t want to own a house again. However, if your family owns and lives in a house for generations, some your values would be different. Some might argue that you’ve been brainwashed. Even so, being kicked out of your home is one of the greatest tragedies. I heard of people who died of shock just when they heard the news they had to leave their family houses.

Years passed and I never thought about that story again, until I visited Kayakoy, the ghost village in Fethyie district of Turkey. Seeing that hillside covered in ruins, I felt just like in the high-school, when that girl brought her brick to school. It was like I could see long rows of sad people, carrying backpacks and dragging their kids after them, looking down, crying maybe, going to a far away, unknown country, as theirs didn’t want them anymore. 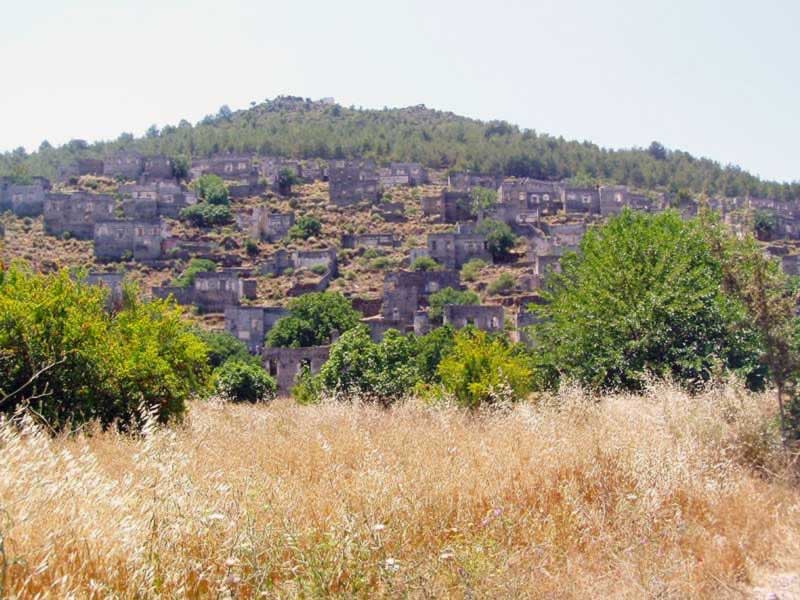 Kayakoy was inhabited by Greek Christians until after the Greek-Turkish war, in 1923, when the two governments signed a population exchange agreement, which was in fact a mutual population expulsion based on religious considerations. The Greeks in Kayakoy packed their bags and went to Greece. It’s hard to say they went “back” to Greece, as they were living together with the Turkish population since centuries and probably didn’t feel any need to go anywhere else. Anyway, the Greeks went away, but their houses were left behind to turn into what is now the ghost city of Kayakoy.

Actually, in the beginning, some Turks expelled from Greece were relocated here, but they couldn’t get accustomed to the place and left it very soon. History is sad. The human race is sad. Back to ancient times, all we read about is how X defeated Y, how villages were burnt, wells poisoned, children and women killed and so on. For each victory celebration, there were victims mourning somewhere. Even “peace” has atrocious implications throughout the history. The peace after World War I chased away peaceful people from their peaceful homes, like those Greeks from Kayakoy. 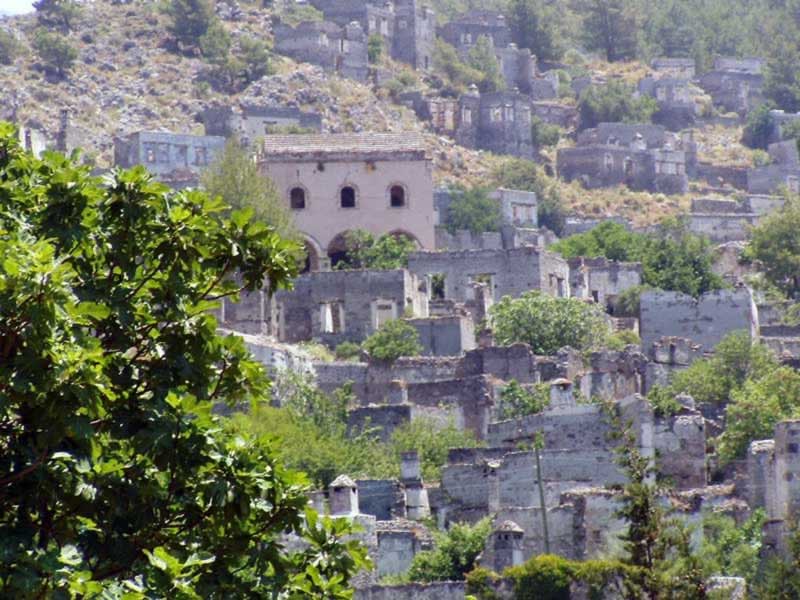 If you happen to be around Fethyie or Oludeniz, go to see it, because it’s well worth it. If you don’t have a car, you can take a dolmus from Fethyie. The dolmus is a minibus and it’s a very popular public transport means in Turkey. It’s cheap and convenient, however, asking the driver if the dolmus goes to … (fill in the blanks with whatever town you want), some of them will say yes, then go elsewhere, then, when they reach the end of line, they just tell you to get off the bus because that’s as far as it goes. It only happened to me twice, but I don’t think I used dolmuses more than six times in total, so I don’t know what to say. Just be warned, I guess.

There’s nothing fabulous about Kayakoy, no amazing architectural works or ruins, however the place transmits a peculiar feeling of catastrophe. The town is built on a hill side. As you enter the valley, you notice the stone houses, but you don’t necessarily realize there are no people. As you get closer, you suddenly understand: there’s nobody and it has been like this for years. Almost all houses are more or less run down ruins. The most intriguing fact is that there are still pots with flowers at some windows. Maybe some people live there, I don’t know.

Kayakoy house with flowers at the windows

At the bottom of the hill, there’s a huge tree under which you can park your car and go for a walk in the Ghost Town. Before that, you can chill out and have a Turkish coffee in a small restaurant, where you can also read a little bit about the history of the place. The restaurant had a nice terrace, covered with rugs to protect from the terrible heat. There were no other customers, only a lazy cat sleeping away from the sun. It was a nice chill in the air under the cover. Shadow is really effective in Turkey. 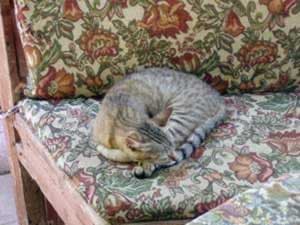 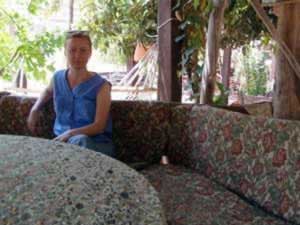 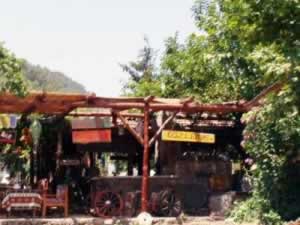 The restaurant in the valley. It was rather small. I imagine it must be busy during peak season. The Fethyie region caters for British people quite heavily, and it shows. There are lots of them and they love taking organized tours. 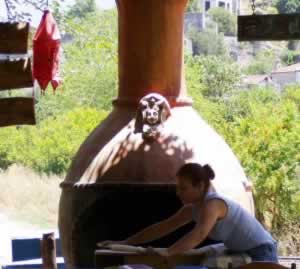 Turkish woman preparing gozleme. I think she filled it with cheese and dill. Yum and refreshing. I loved it.

I didn’t miss the opportunity to have gozleme, a traditional Turkish savory pie filled with cheese. You can also have it filled with minced meat. Both variants are delicious. Wherever you see a gozleme stand on the street, there’s a woman, most of the time an old lady, who makes the pies just in front of you. Gozleme is one of my favorite Turkish street foods. 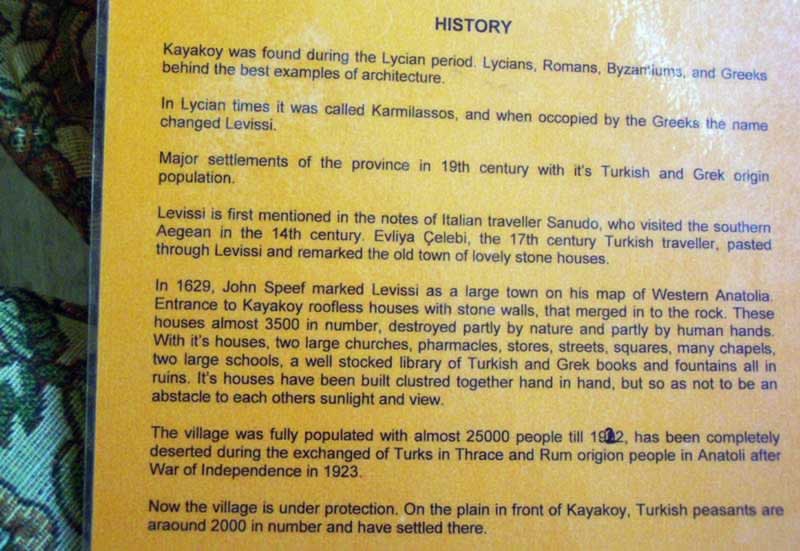 I have to say that the apocalypse feeling you get from a distance when you realize you’re approaching a deserted village, fades away when you walk through the streets. Among deserted and mostly ruined dwellings, there are a few souvenir shops and restaurants. It’s not only hilarious, but it also spoils the “end of time” effect. However, if you are there and you feel the urge of getting some fridge magnets, you can. Even so, the place is definitely worth a half day visit. I’ve been there years ago, so I might not remember very well, but I think we had to pay a small entrance fee to walk through the town.