The Roman Baths of Caracalla – Location, Tickets & Reasons To Visit 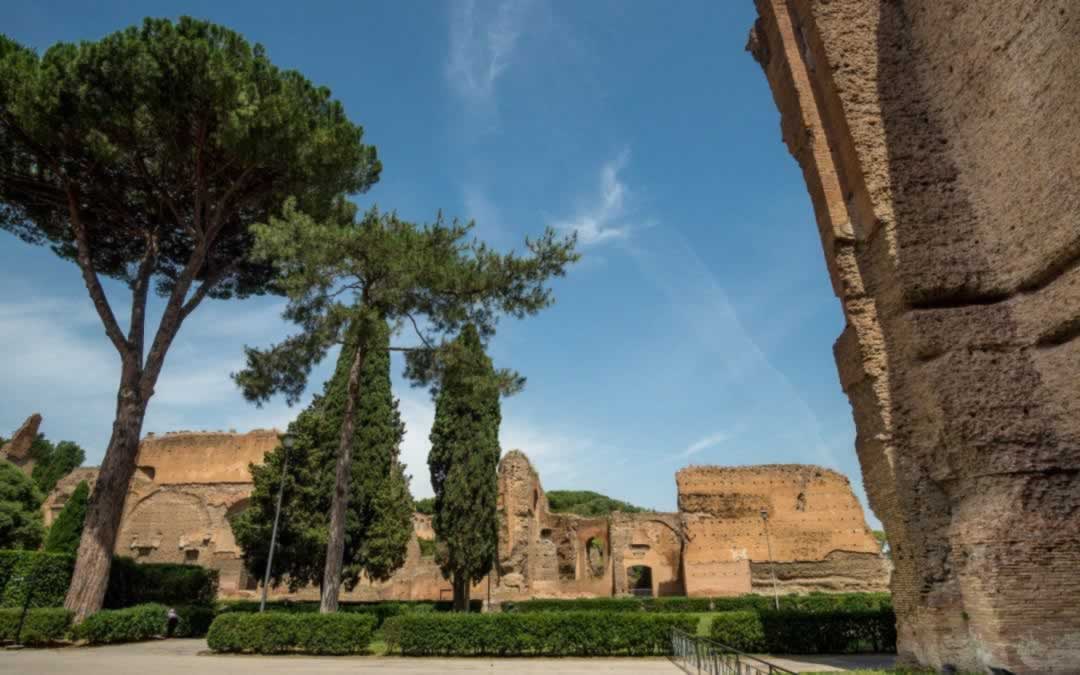 Baths of Caracalla are the best preserved public bath complexes of ancient Rome. The construction of Baths of Caracalla, then known as Antonine Baths (Thermae Antonianae) was started under the emperor Septimius Severus, in AD 206. The construction of the baths took 10 years and it was eventually completed under his son, emperor Caracalla. The baths were in use until the 530s. Throughout all this time, more ornaments were added by different emperors that followed Caracalla.

In the ancient Roman spirit of recycling old buildings to serve modern purposes, the Baths of Caracalla are now a museum and an open-air theater where you can attend various performances such as ballet, opera, and music concerts. Just like Ostia Antica and other ancient establishments, the Baths of Caracalla host an amphitheater, with music and lighting systems, and with everything needed to cater to an audience of music and art lovers.

What Are the Baths of Caracalla?

Public baths in ancient Rome fulfilled more than one function. People came to the public baths to take care of their personal hygiene, but also to swim, to relax, to play games and to socialize.The Baths of Caracalla had a structure composed of multiple parts: the Caldarium, the Tepidarium, the Frigidarium and the Natatio. Apart from these chambers, the complex had two gymnasiums and other additional leisure areas. 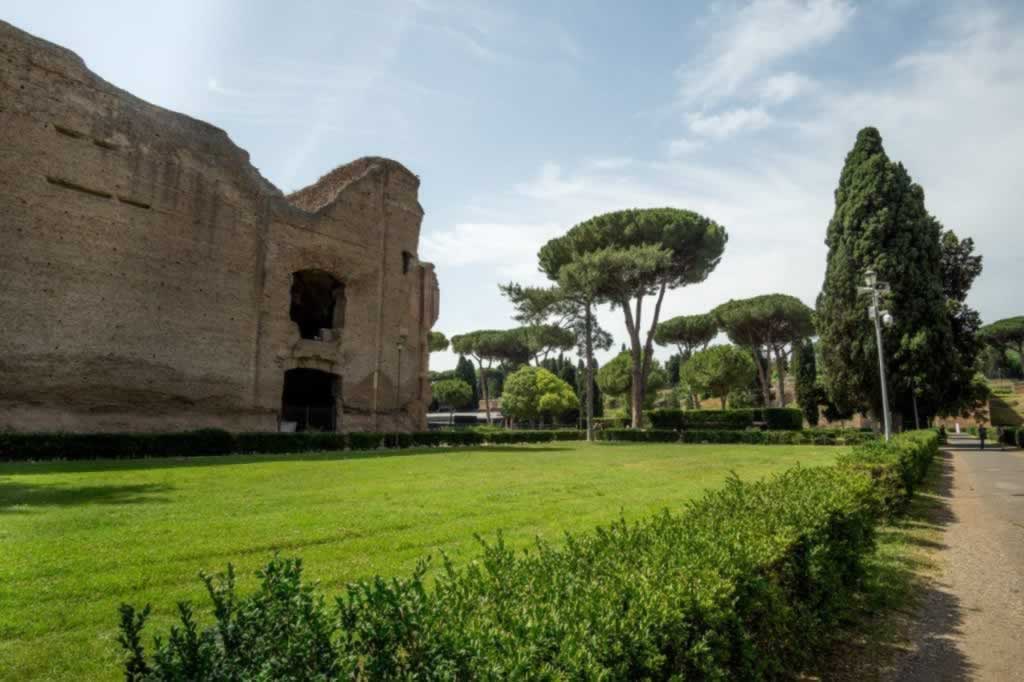 Since people lived in homes without running water or private baths, they came to the public bath houses very often. This was a great opportunity to socialize and to mingle with their peers. In fact, the socializing part was even more important than keeping up with the personal hygiene. The access to the Baths of Caracalla was free of charge. The museum is not, but it is well worth the entrance fee (as far as I remember, the full price ticket was 8 Euro as of June 2019).

How Big the Baths of Caracalla Were?

Designed to accommodate 1600 persons, these public baths were the largest in Rome at that time. Later on, almost 100 years later, the Baths of Diocletian took the supremacy in terms of number of simultaneous bathers, with a capacity of about 3000 persons. According to historians, the Baths of Caracalla had a daily capacity of 6000 headcount – that’s quite a big bunch of Romans who could enjoy this thermal facility every day.

The Baths of Caracalla consisted from a series of large vaulted rooms that hosted the tepidarium, the frigidarium and the caldarium, completed by a number of auxiliary rooms dedicated to sports and leisure activities, as well as by a surrounding garden.

This square complex also featured open air swimming pools. It was decorated with marble, sculptures, mosaics, frescoes and many other embellishments. The baths were supplied with water from a dedicated aqueduct. The heating system of the building was a hypocaust that relied on burning wood and coal in an underground chamber to heat the water (source: Wikipedia) 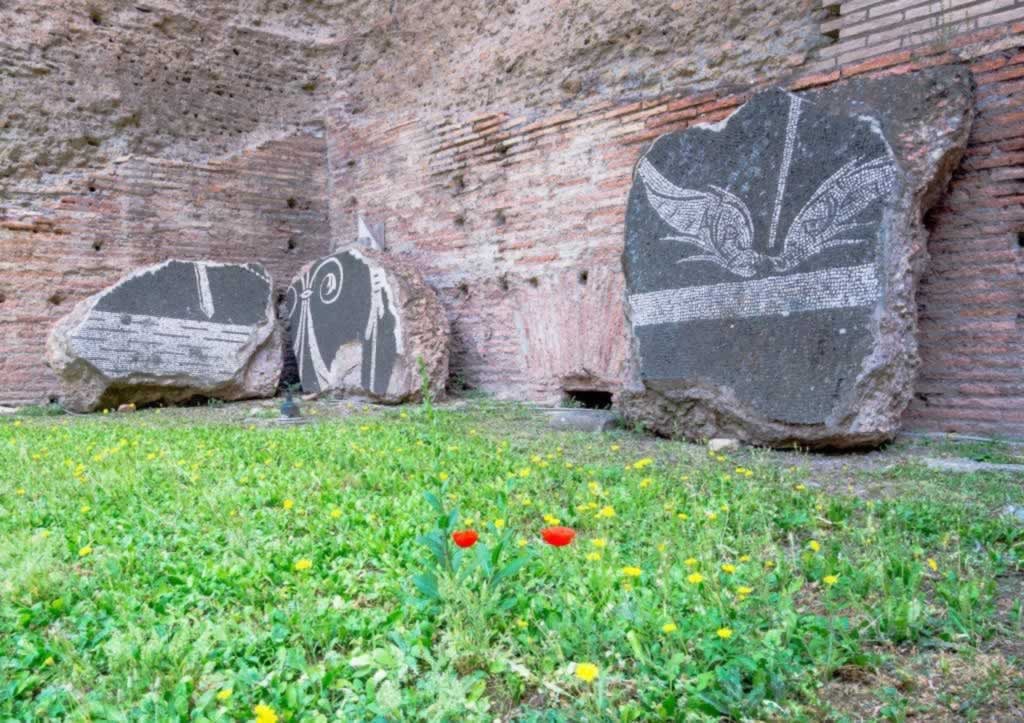 I would use this mosaic in my own bathroom any time. 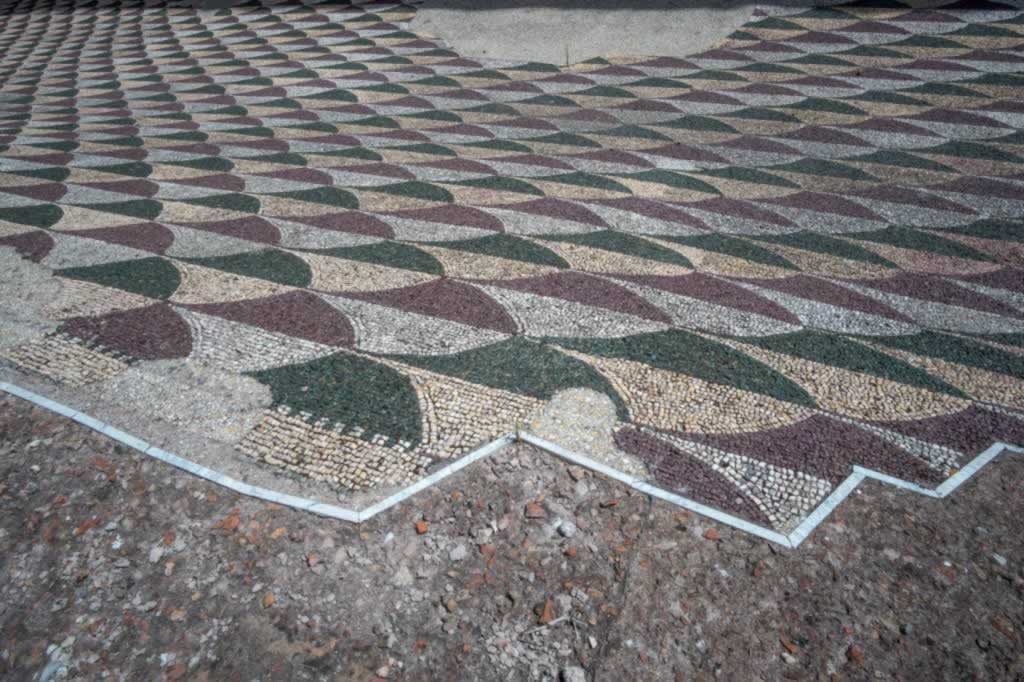 Why Are These Ancient Roman Public Baths So Important?

The spa of Caracalla is important because it is one of the rare ancient structures in which we can see the reconstruction of the original interior decor. Archeologists found manuscripts containing exhaustive descriptions of the marble floors, giant columns, and colorful mosaics. Here’s a detailed description of ancient Roman baths and spas and a glimpse into the lifestyle of ancient Romans.

You can realize the monumental size of this building by taking a look at this impressive archway connecting two of the chambers in the complex. 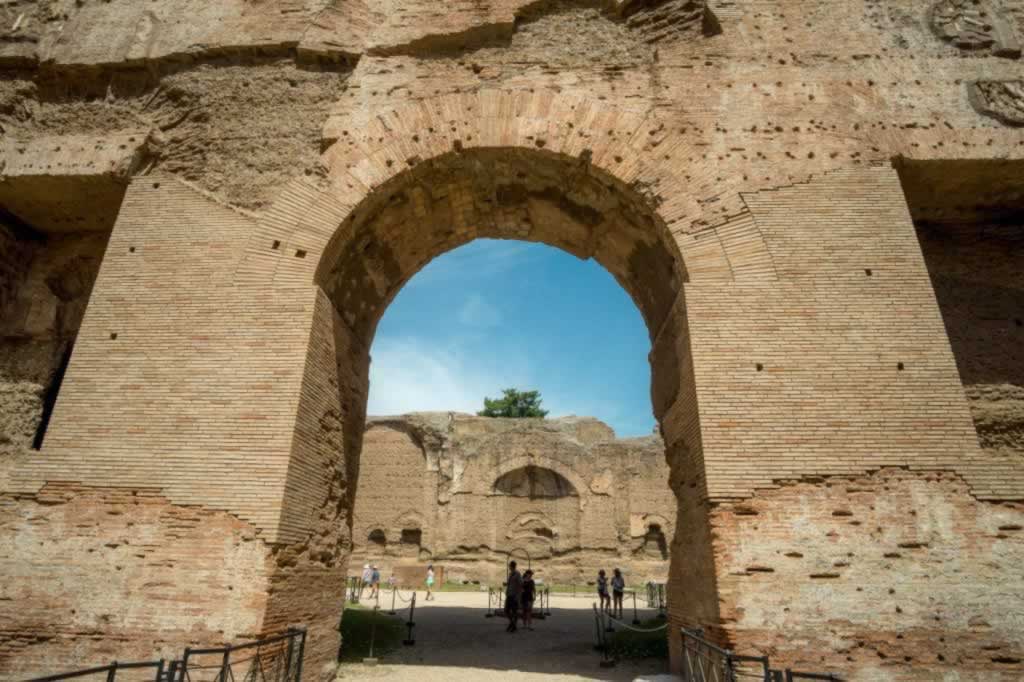 The impressive height of the ceilings enables the architects to build huge windows that let a generous amount of light in. Even though the ceilings are no longer here, you can easily see how big the whole structure was. 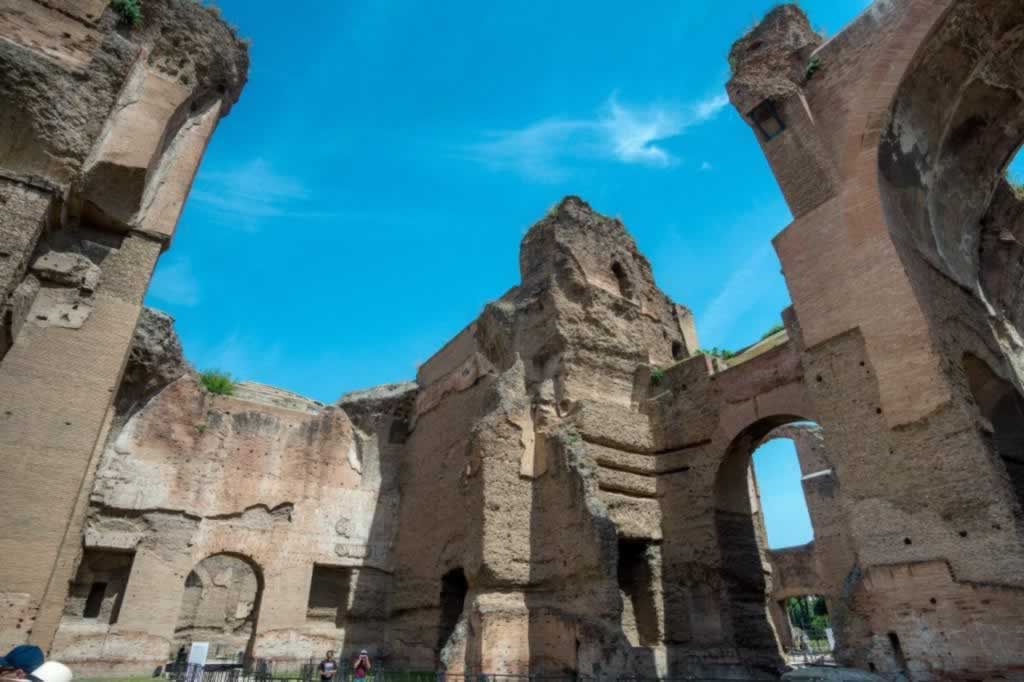 The ruins of Therme di Caracalla look surrealistic. It’s amazing that the entire complex took only 10 years to build. Those slaves were surely worked to death. 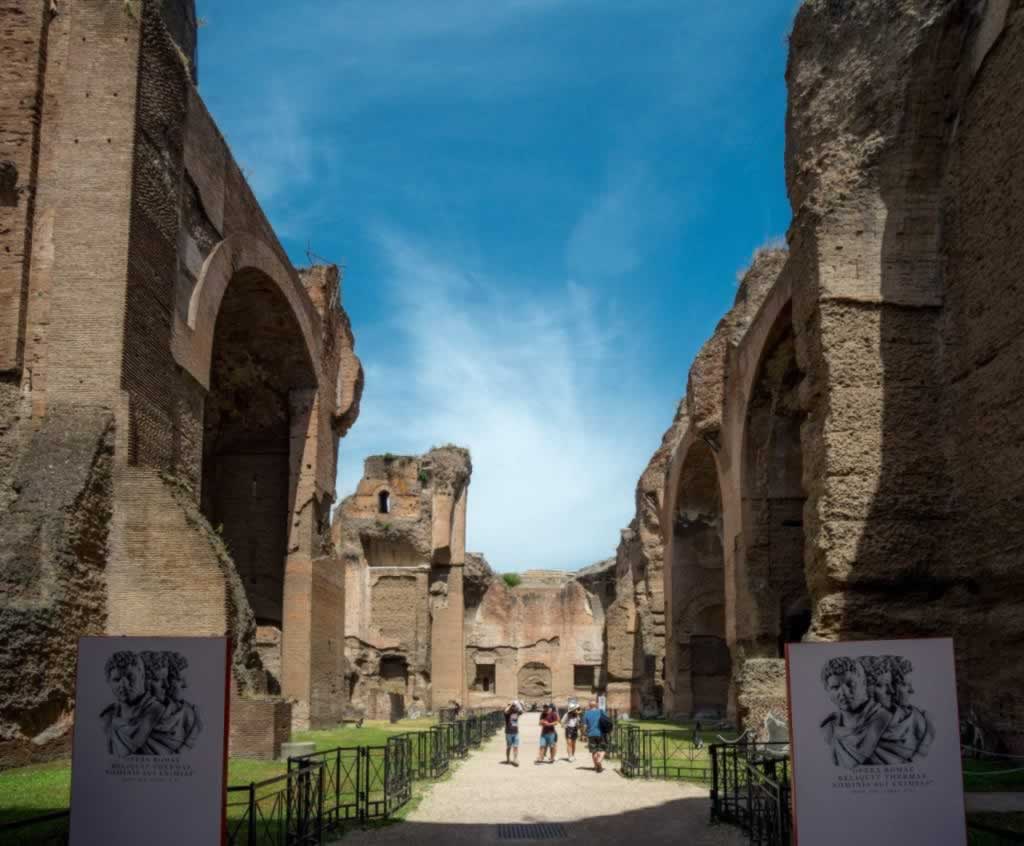 Where Are the Baths of Caracalla in Rome?

The Baths of Caracalla are located on Viale delle Terme di Caracalla, no 52.

As a general note about Rome, never rely on buses. They seldom come on time (as opposed to other countries where you can use the bus timetables in Google Maps without [problems) and oftentimes they are overcrowded. If you pass by a bust stop and you see your bus coming, take it by all means. However, if there’s no bus, consider walking, as you may arrive to your destination sooner than the bus. Keep these in mind when you choose where to stay in Rome.

If you prefer to walk, you can reach the baths of Caracalla from Termini railway station in about 35-40 minutes. That’s only about 10 minutes slower than the bus.

From Piazza Venezia, you can get to the baths in about 30 minutes, which is twice as long as taking the same journey by bus.

I took the Metro from Colosseum station and everything went just fine.

How To Visit the Baths of Caracalla

As the ceiling and the pools are not longer there, you’ll have to use your imagination to get a complete picture of the place. However, the outer shell is a massive structure that will help you understand the size of this establishment. This is what you get for the basic entry ticket price.

For an upgraded visit, get the VR guide at the entrance. They will give you virtual reality goggles that will show you the Baths of Caracalla in 3D, as they looked like in ancient Rome. The VR option comes with an audio guide, so you’ll have a complete experience of these Roman bathhouses. I’ve realized I could have taken some VR goggles only when I was already inside the baths, so I can’t give you details. However, judging by the teens I’ve seen wearing their goggles and having a great time, I think this extra is worth it.

If you want to learn the facts straight from an expert, get a private tour of the baths with an art historian. Check out the details and book your tour here.

Here’s a 3D reconstruction of the baths that looks neat:

Things To Know Before Getting to the Baths of Caracalla

During your visit, remember to visit the exhibition in the underground section of the baths. Here’s some info on their official website. For some reason, I haven’t found it, nor did I know about it prior to my trip to Rome in the second part of June 2019. Apparently, the catacombs opened to the public on 18th of June 2019. I’ve visited the Baths of Caracalla on the first Sunday after the opening of the catacombs, but I haven’t seen any sign that you could actually go underground.

Bring water with you, because there’s nowhere to buy it from inside the complex. Also, wear comfortable walking shoes, as you’ll need to walk a lot from the main entrance to the last area of the baths.

Check out the opening times before your visit. You don’t need to buy tickets in advance, as the Baths of Caracalla aren’t one of the top attractions in Rome (although I strongly believe they should).

If you want to read again this article, pin it for later: 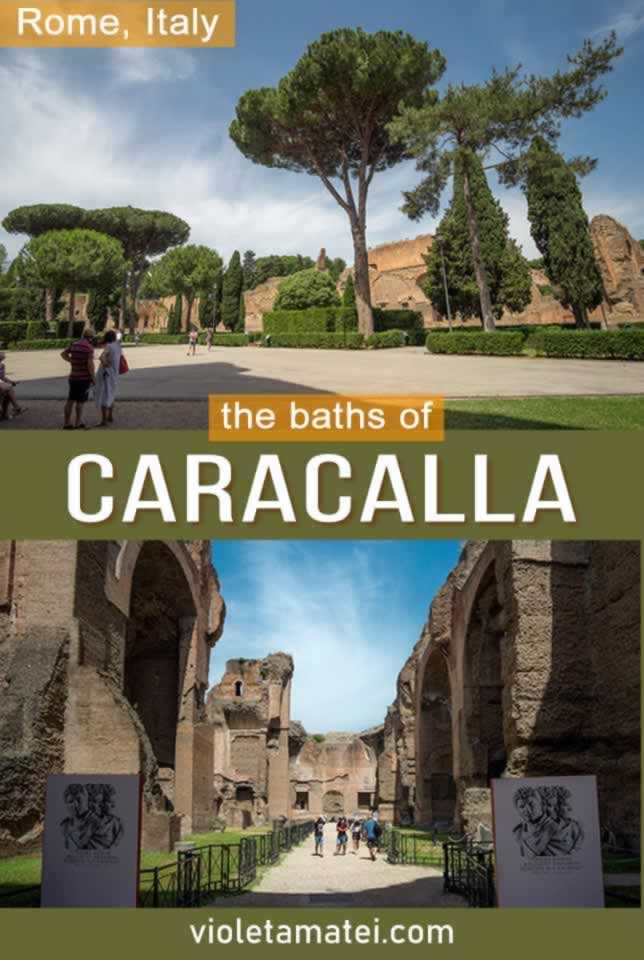