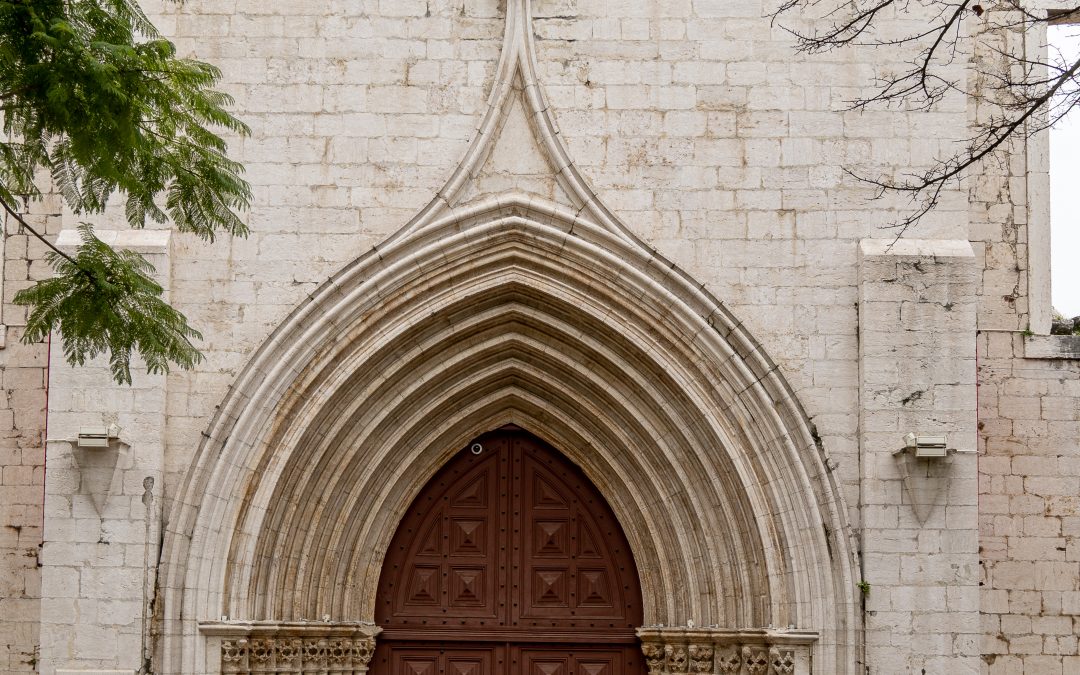 As you stand in Rossio Square and you look toward the hill where Castelo de Sao Jorge is, you may notice a beautiful ruin that stands out from the ocean of orange roofs. That’s what’s left of Carmo Convent, a Gothic style monastery from the 14th century.

Any 4-day Lisbon itinerary should include Carmo Convent. It is right in the center of the city, close to so many other landmarks and attractions, that you won’t need to go out of your way to visit it. Besides, visiting the convent won’t take more than 30 minutes. 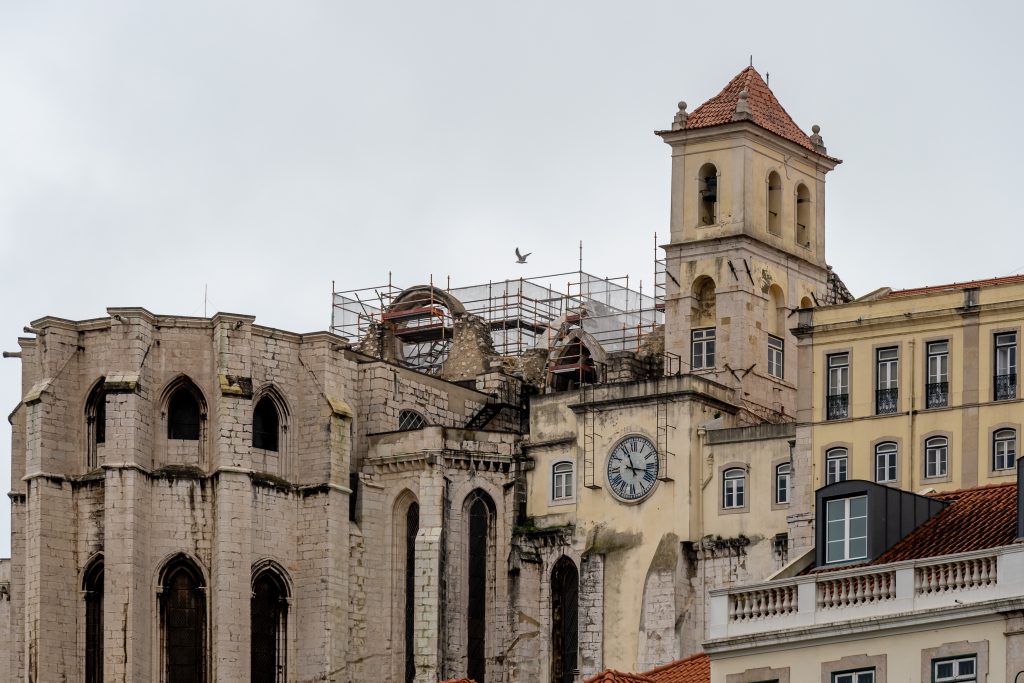 This is how Carmo Convent looks as viewed from Rossio Square 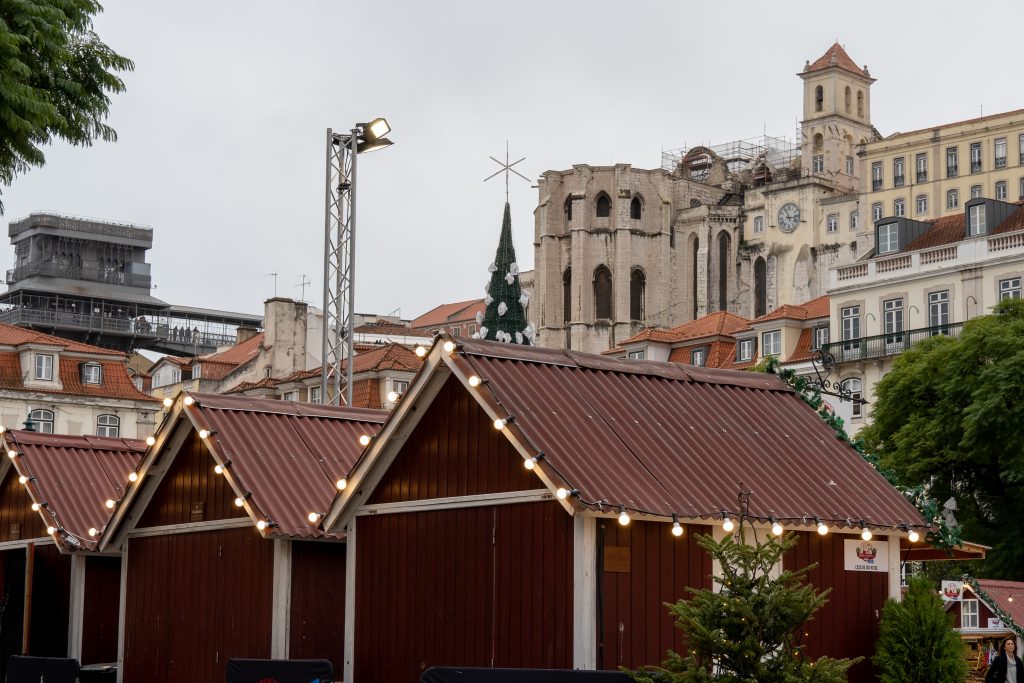 How to Visit Carmo Convent

Use Your Lisbon Card or Buy Your Ticket at the Entrance


To start with, I’d recommend that you reserve your Lisbon Card here. The Lisbon card is a 24, 48 or 72-hour pass that grants you unlimited access to the public transport system, free admission to some tourist spots and discounts at Carmo Convent and other objectives. Click here to see the list of Lisbon attractions that are free with this card. 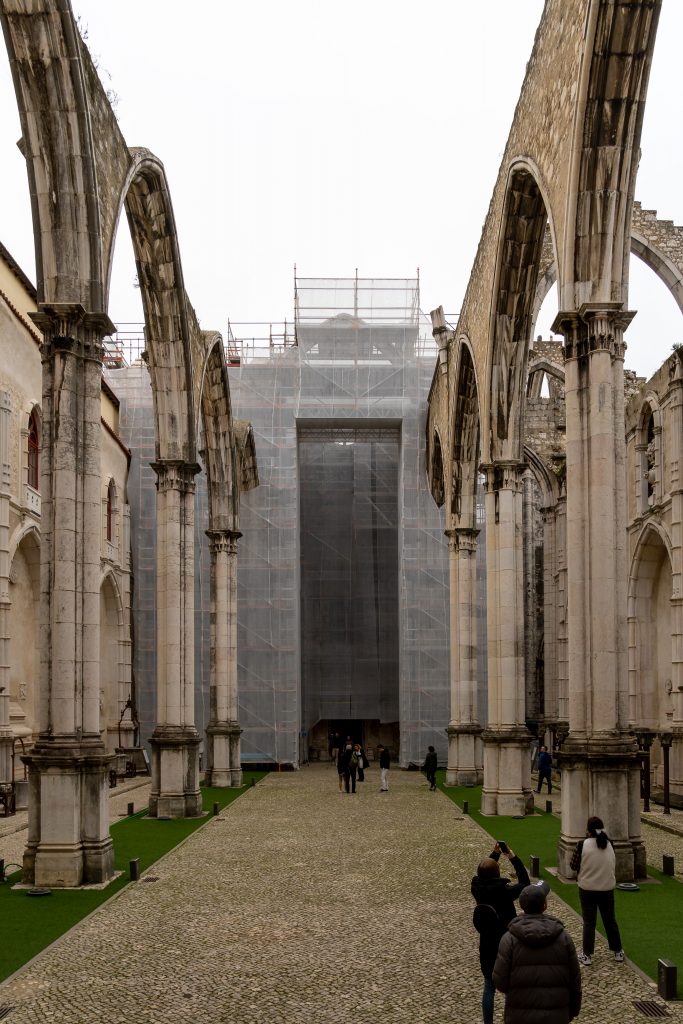 Even roofless, the ruins aren’t neglected – undergoing maintenance works spiled my photos even more than the dull sky

The Carmo Convent is open from Monday to Saturday, between 10am and 7pm during May-September, and between 10am and 6pm during October-April. Click here to visit the official website of Museu Arqueologico do Carmo.

I visited the convent in December. Even though that’s off season, you may find a big line at the ticket desk. Getting to the convent in the morning can help, but that’s not ideal for beautiful photos. If you want to visit the ruins at the golden hour, you’ll need to put up with the line.

The address of Carmo Convent is Largo do Carmo, Chiado.

This historic monastery located in Lisbon, Portugal, the Carmo Convent, also known as the Convent of Our Lady of Mount Carmel, was founded by Nuno Álvares Pereira.

The Carmo Convent is known for its Gothic architecture, boasting arched windows and doors, pointed spires, and ornate carvings. The monastery is also home to a cloister, a chapel, and a chapter house. The place is nowadays a museum, hosting ancient artifacts such as an Egyptian mummy and two South American mummies of children. The museum is in the former nave area of the church. 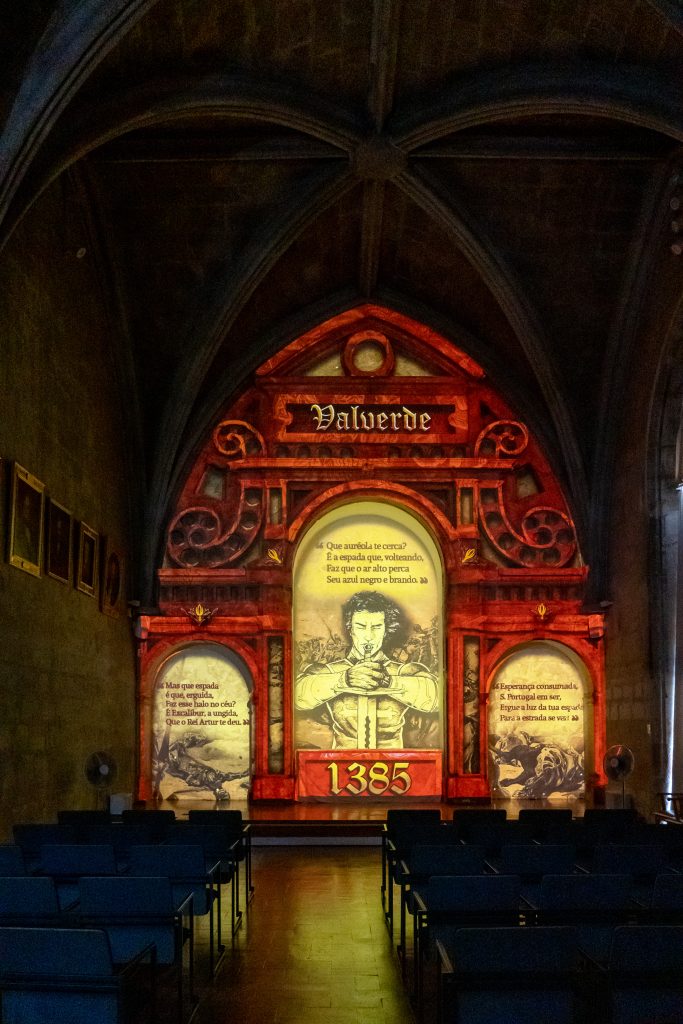 One of the rooms hosts a wall projection: the history of Carmo Convent – there are chairs, so you can watch it comfortably

Overall, the Carmo Convent is an important cultural and historical site in Lisbon, offering you a glimpse into the city’s past. In addition, it is a great opportunity to explore the pillars and other elements of the beautiful Gothic architecture.

The Gothic ruins are gorgeous. You’ll want to take lots of photos from all angles. I surely did. Unfortunately, the day I visited the convent the sky was dull and gray, so my photos of the ruins didn’t come out great.

The tomb of Dom Nuno Álvares Pereira is located in the main chapel of Carmo Convent, which sits now under the bare sky. The tomb is one of the few surviving elements of the convent. As you can see from my photo, below, the tomb is a simple stone slab with a recumbent effigy of the knight, and it is decorated with his coat of arms. 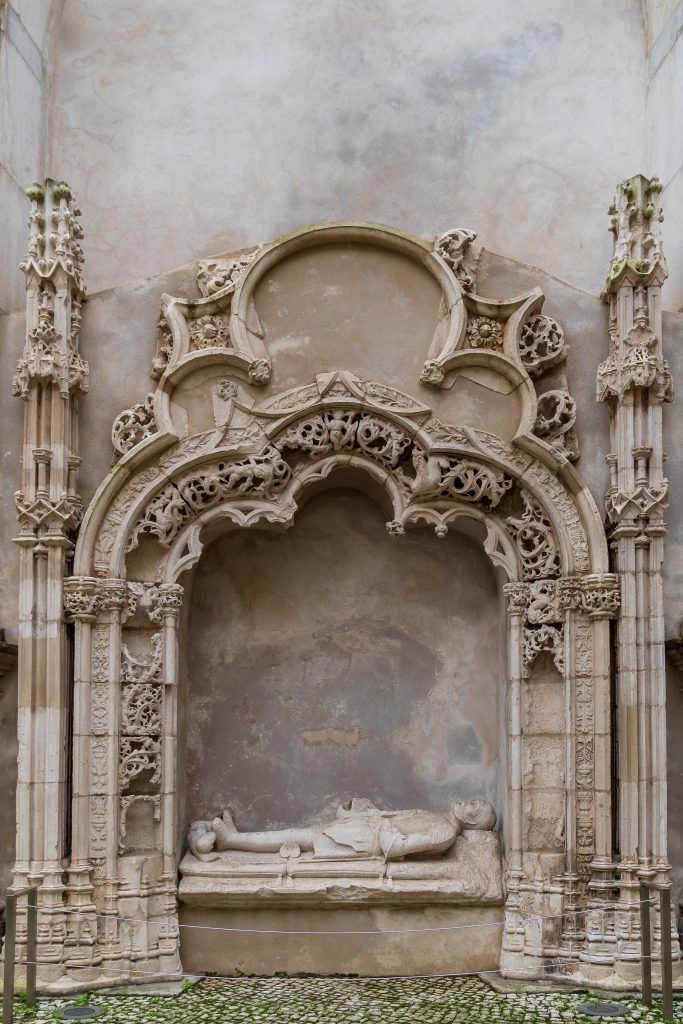 Visit Carmo Convent to see the tomb and to learn about the life and accomplishments of Dom Nuno Álvares Pereira.

The Carmo Convent is home to the Museum of Archaeology, which houses a collection of artifacts and exhibits related to the history of Portugal. The museum is located in the former chapter house of the convent and is a popular destination for visitors interested in learning about the country’s past.

During her time as queen consort, Maria Anna played a significant role in the political and cultural life of Portugal. She supported the arts and sciences, and she founded the Royal Academy of Sciences in Lisbon. Maria Anna also worked to improve the education of women in Portugal, and she established the Convent of the Misericórdia in Lisbon, which was a center of learning for women.

After the death of her husband, Maria Anna returned to Spain and retired to a convent, where she died in 1679. Despite her brief tenure as queen consort, Maria Anna had a lasting impact on Portuguese society, and she is remembered as a patron of the arts and education. Her tomb is in the Carmo Convent Museum. 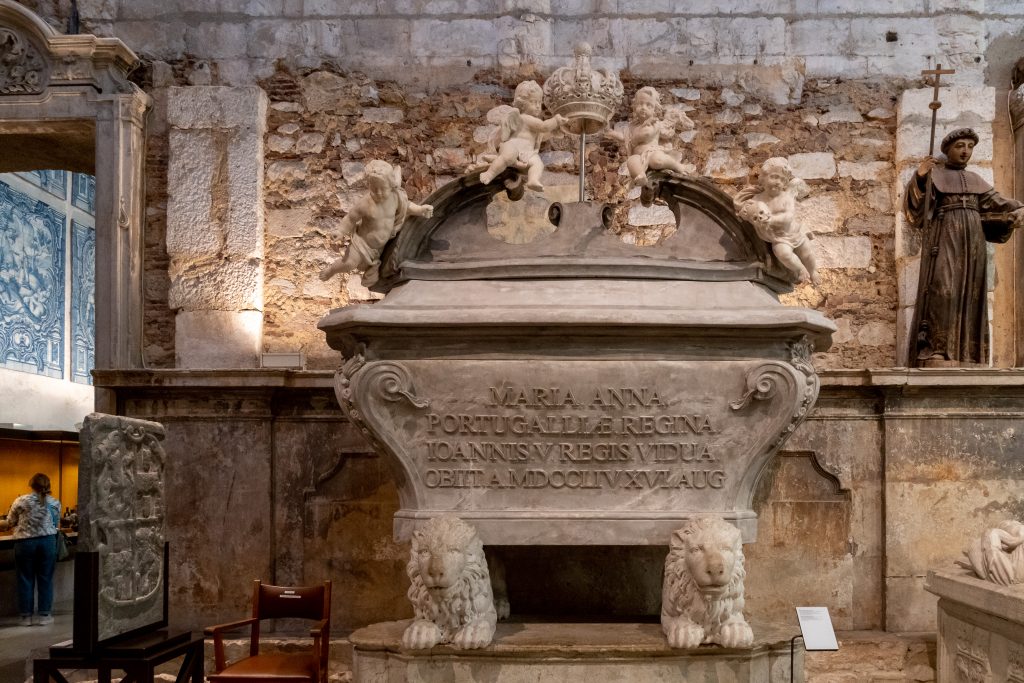 Various Artifacts in the Archeology Museum

Even though they aren’t related to the history of Carmo Convent, these artifacts are interesting. They add value to this museum and make it well-worth visiting. 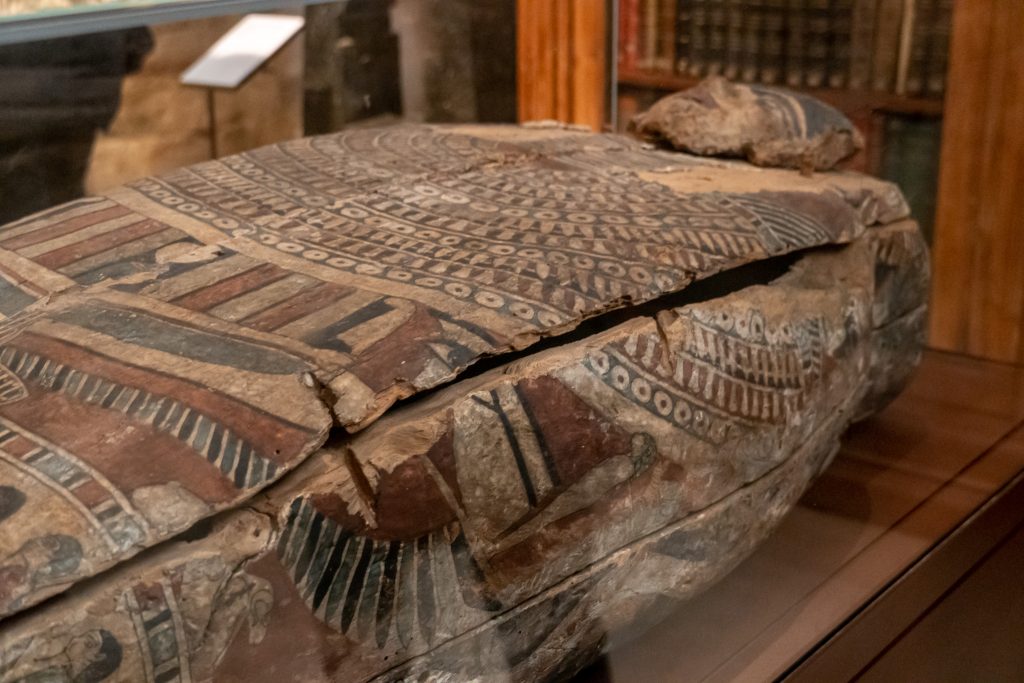 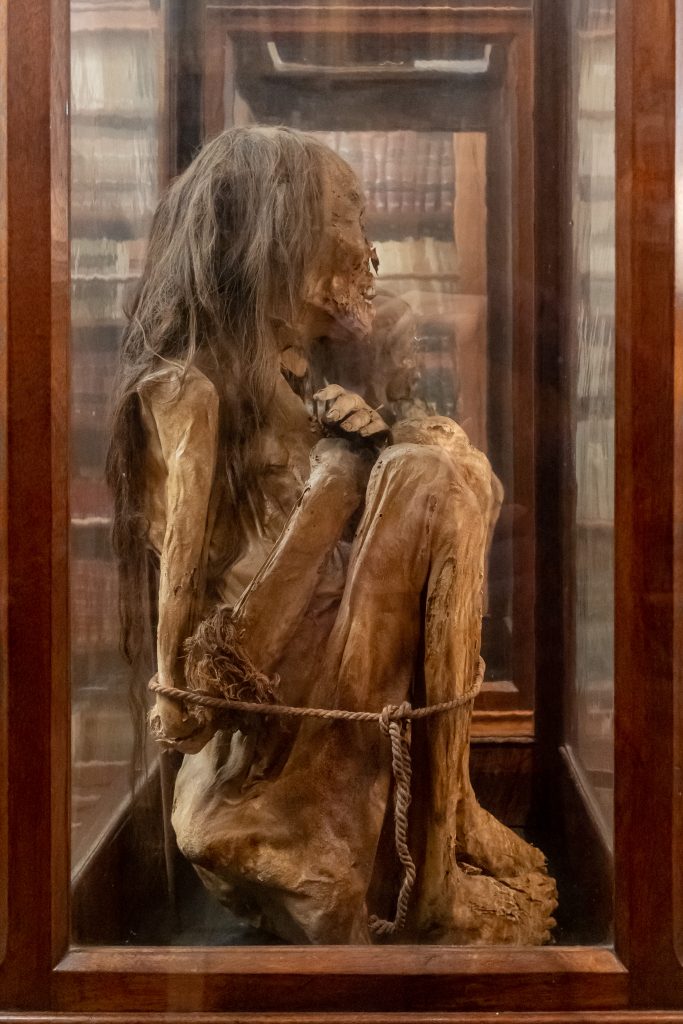 Where Is Carmo Convent in Lisbon?

Lisbon’s Convento do Carmo is very easy to find. Located near the Santa Justa Elevator and Baixa-Chiado Metro station (Green Line), this museum is definitely worth a visit. It is one of the most interesting landmarks in Portugal.

Here’s how to get to Carmo Convent:

From the Baixa-Chiado metro station, walk up to Rua do Carmo. Within a few minutes, you should arrive at Largo do Carmo. The convent will be on your right.

The walk from Rossio Square to Carmo Convent should take about 15-20 minutes, depending on your pace. Rossio Square is located in the heart of Lisbon, so you will pass many interesting sights and landmarks on your way to the convent. 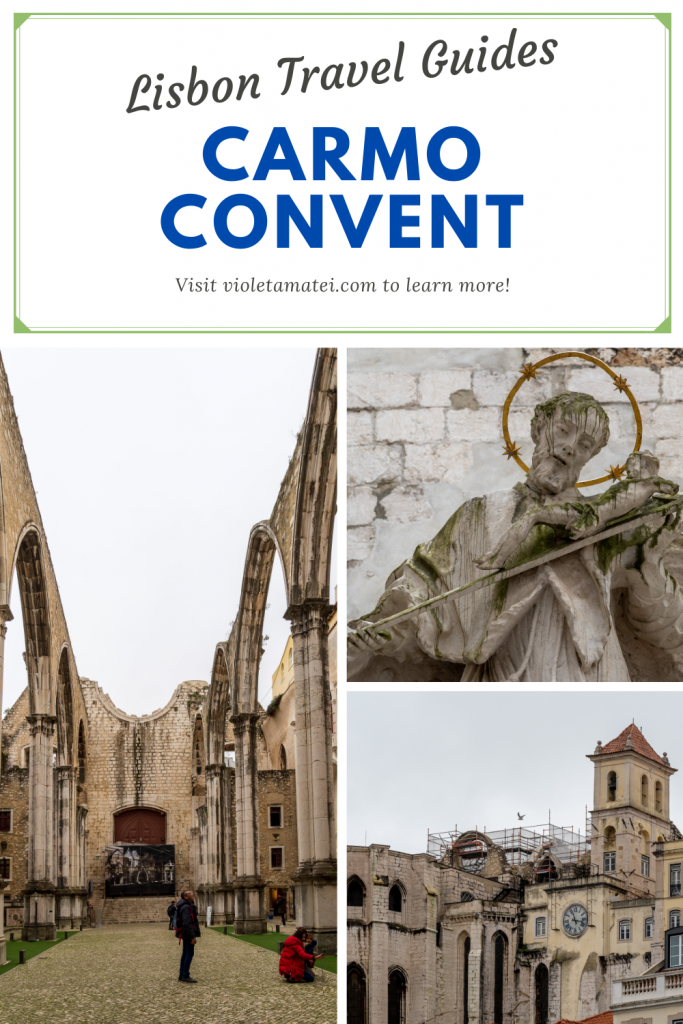