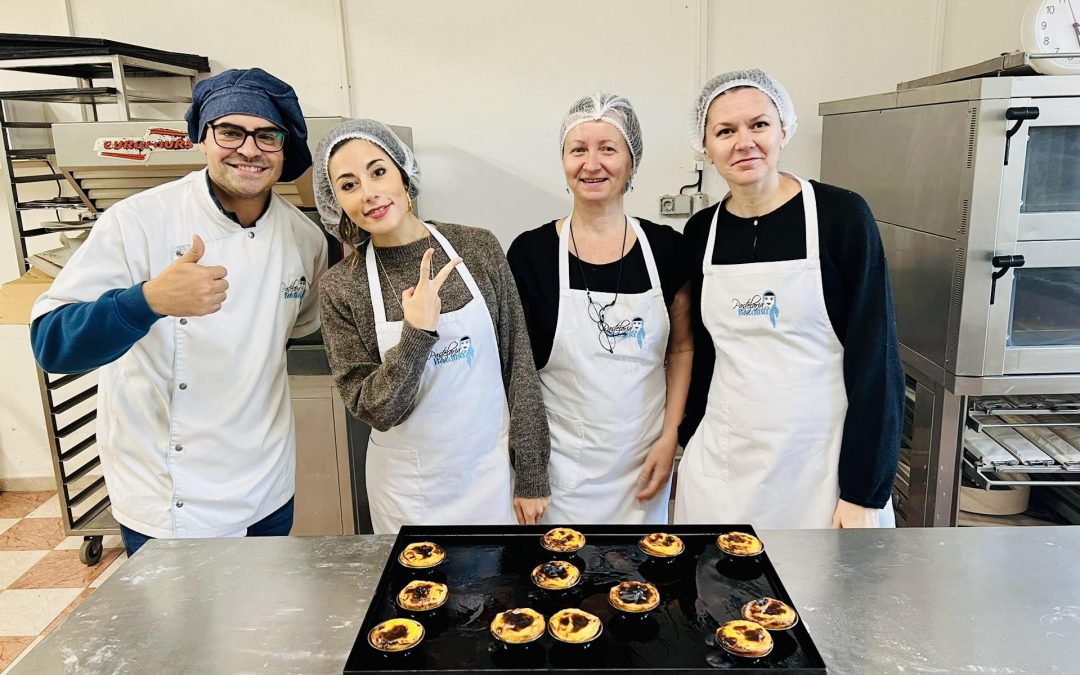 Local food is always a good reason to travel the world. When it comes to Portugal, one of the stars of the local cuisine is the bite-sized egg custard tart known as Pastel de Nata. You could even learn directly the plural form of this Portuguese noun, which is Pasteis de Nata. One is never enough, so you may as well order two right off the bat. Also, make sure you learn how to say thank you in Portuguese, to put a smile on the faces of the vendors.

The origins of the pastel de nata can be traced back to the 18th century, when it was created by Catholic monks at the Jerónimos Monastery in the Lisbon neighborhood of Belém. There’s even a small pastry shop right near the monastery, called Pasteis de Belém, where owners claim to be using the original recipe. As you can imagine, the claim brings a lot of tourists to this shop, so there’s always a huge line. I had two lovely pasteis in another coffee shop a bit farther down the street.

The pastel de nata recipe has remained largely unchanged over the years. It consists of a flaky pastry crust filled with a rich and creamy custard filling. The custard is made from egg yolks, sugar, and milk, and is flavored with a hint of lemon zest and cinnamon. The pastries are then baked in a high heat oven until the custard is set and the crust is golden brown and crispy. Some prefer them slightly overcooked while others swear by the slightly lighter colored ones. 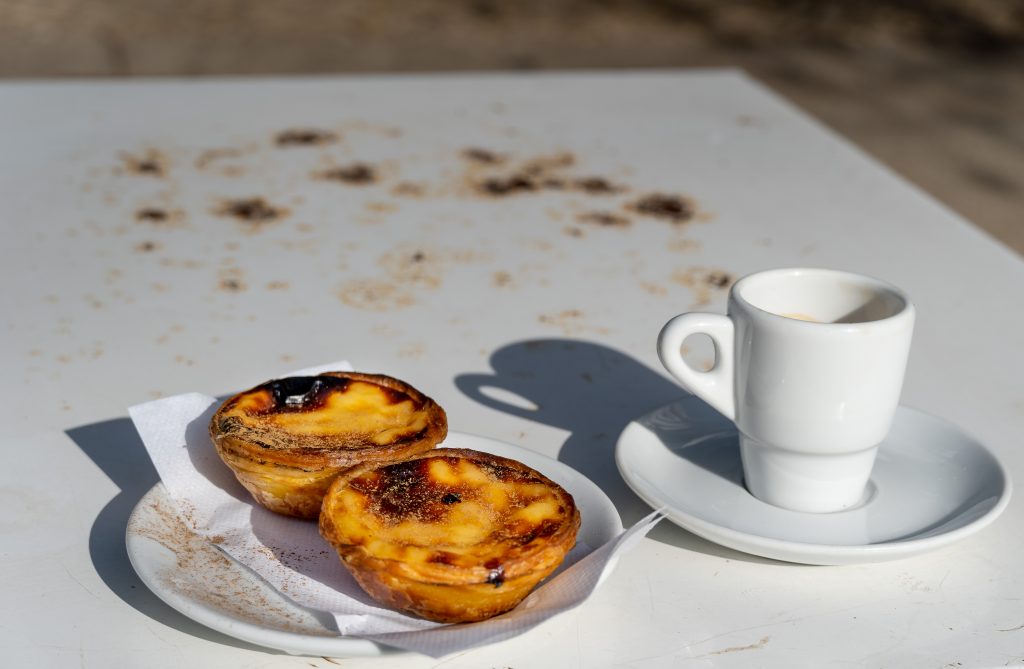 These are the pasteis de nata you can find in a pastry shop near Timeout Market, at Cais do Sodre, in Lisbon.

One of the things that sets pastel de nata apart from other custard tarts is its unique shape. The pastries are traditionally baked in small, shallow dishes with scalloped edges, which gives them their distinctive appearance. In this article, I’ll share with you the secret of obtaining the perfect pastry shell, as I learned it from chef João Batalha during his hands-on pastel de nata workshop.

In addition to its delicious flavor and beautiful appearance, pastel de nata has a rich cultural history. It has long been a popular treat in Portugal, and can be found at bakeries and cafes throughout the country. In recent years, pastel de nata has gained popularity around the world, and can now be found in many countries outside of Portugal.

Learning How to Make Pasteis de Nata at Pastelaria Batalha

If you can spare half day out of your time in Lisbon, you can attend this pastel de nata workshop in Malveira, near Lisbon. Getting to Malveira from Lisbon is easy. You take the bus to Ericeira from Campo Grande. Here’s the Lisbon Metro map to see where the Campo Grande station is.

Run by Pastelaria Batalha, this cooking workshop is also available online. However, I think that going there and participating to the process of preparing these delicious tarts can make a huge difference. You’ll weigh, mix, knead, work and pour everything with your very own hands. By the end of the pastel de nata workshop, you can buy your own kit to make these delicious custard tarts at home. 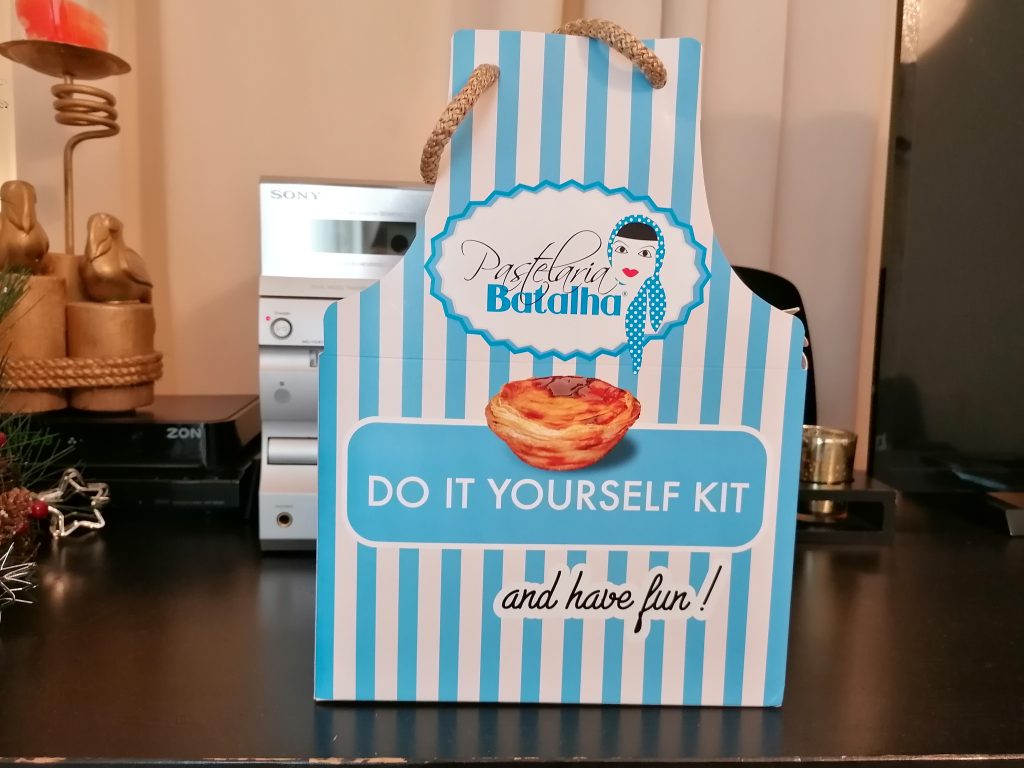 The kit contains 12 pastel de nata tin molds, one pouring funnel, one apron and a notebook with the pastel de nata recipe and the step-by-step instructions

Touching and feeling the dough is very important, because you’ll know how to replicate your success in your own kitchen. This is why hands-on cooking workshops are better than online classes.

To make puff pastry from scratch, one needs to fold the dough multiple times. When it comes to preparing the pastry for pastel de nata, you only need to fold and stretch the dough three times. The first time you’ll work the butter into the dough by tapping it with the roller pin.Take care not to tap too hard, as the butter can’t wait to break through the dough, ruining your work.

Next, you fold it in three, you rotate it 90 degrees, then you stretch it, and then you fold, rotate and stretch again.

Next, you need to remove all flour from the dough surface. You do this with your palms, by wetting them slightly and by gently wiping the surface.

Once the dough is clean, you start rolling it on the longer side until you obtain a roll of approximately 2-3cm diameter. You wrap it in baking paper and you set it aside in the fridge to cool. You can store it in the freezer for a few days, if needed.

I found the dough preparation to be quite tricky. While during the pastel de nata workshop in Lisbon everything went well, my first home attempt was a different story. I wasn’t able to obtain the same texture as in Lisbon, the reason being that I made a mistake when I measured the amount of water to add to the mix. The result was not bad. Together with friends, I ate the entire batch.

The following video is an edit of the pastel de nata workshop I had the pleasure to attend during my week in Lisbon.