Home | Italy | Where to See Caravaggio in Rome: Famous Paintings in Churches

Where to See Caravaggio in Rome: Famous Paintings in Churches 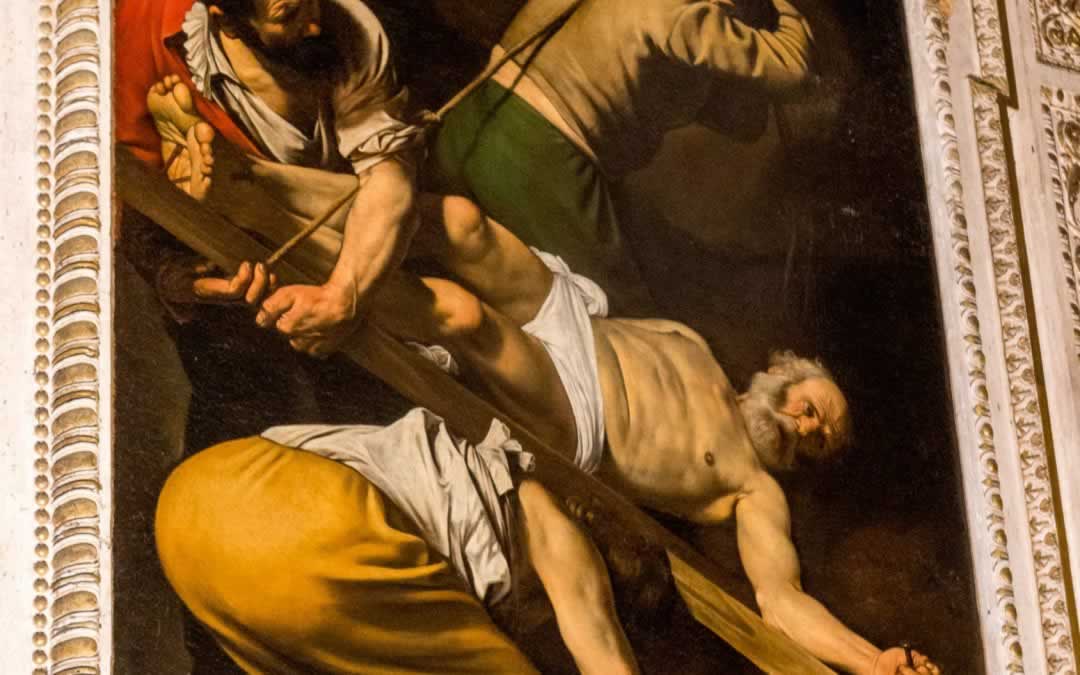 The three churches where you can find paintings by Caravaggio in Rome are Sant’ Agostino, San Luigi dei Francesi and Santa Maria Di Popolo. Find out how to visit all three churches in a self-guided tour of historic Rome. The entrance is free, but lighting up the artworks requires inserting Euro coins into a box.

If you plan to travel to Rome, you probably know already that you’ll find some of the most important works of Caravaggio in Galleria Borghese, in the Capitoline Museum and in the Pinacoteca of the Vatican Museum. What you may not know is that there are several churches in Rome where you can admire some amazing Caravaggio artworks for free (or almost). How would you like to see The Martyrdom of Saint Matthew, The Calling of St Matthew or The Conversion of St Paul? They are all in Rome, in churches where you can enter for free.

There are three churches in Rome that host Caravaggio paintings. There’s no entrance fee and most of the time there are no tourist crowds. If you find yourself in the middle of a large tourist group, you can simply take a walk and come back in 15 minutes to have these paintings all to yourself. The drawback of being the only visitor is that you’ll have to put a 1 or 2 Euro coin into the box that switches on the lights around the painting. When there are other groups around you, someone will inevitably insert a coin, so your coins will take you a longer way.

While 1 Euro is a small price to see such great artworks, I believe that they look great in semi-obscure, just as Caravaggio intended them to. However, the lights come in handy when it comes about taking photos of these paintings.

This Rome itinerary to see the art of Caravaggio takes about three to four hours. It is a pleasurable half-day self-guided walking tour that will take you to some of the most beautiful places in Rome. Regardless of the location of your hotel in Rome, you’ll start your tour in Piazza Navona and you’ll end it in Piazza Del Popolo.

Tourists aren’t allowed to enter these churches in Rome during the mass. As the times of the religious service may change from time to time, you should check this out before you schedule your tour.

Your first stop from Piazza Navona will be the Church of San Luigi dei Francesi, located in the historic center of Rome, in the Campo Marzio area, in Piazza di San Luigi de’ Francesi.

The second stop will be Basilica Sant’ Agostino, also located in the Campo Marzio area, on Via della Scrofa, nearby the Sant’ Eustachio river. This church is only a few minutes of walking away from San Luigi Dei Francesi.

The last stop of your Rome itinerary will be in Piazza Del Popolo, in the Basilica of Santa Maria del Popolo.

You can also start from Piazza del Popolo and walk your way to Piazza Navona. Remember, through, to check out the opening hours of all three churches in Rome that house Caravaggio’s paintings, in order to make sure you don’t get there after the closing time.

Located very close to Piazza Navona, the Church of San Luigi Dei Francesi hosts three Caravaggio paintings: The Calling of Saint Matthew, Inspiration of Saint Matthew, and The Martyrdom of Saint Matthew. All three paintings are inside the Contarelli Chapel, which is the last one on the left side as you face the altar. 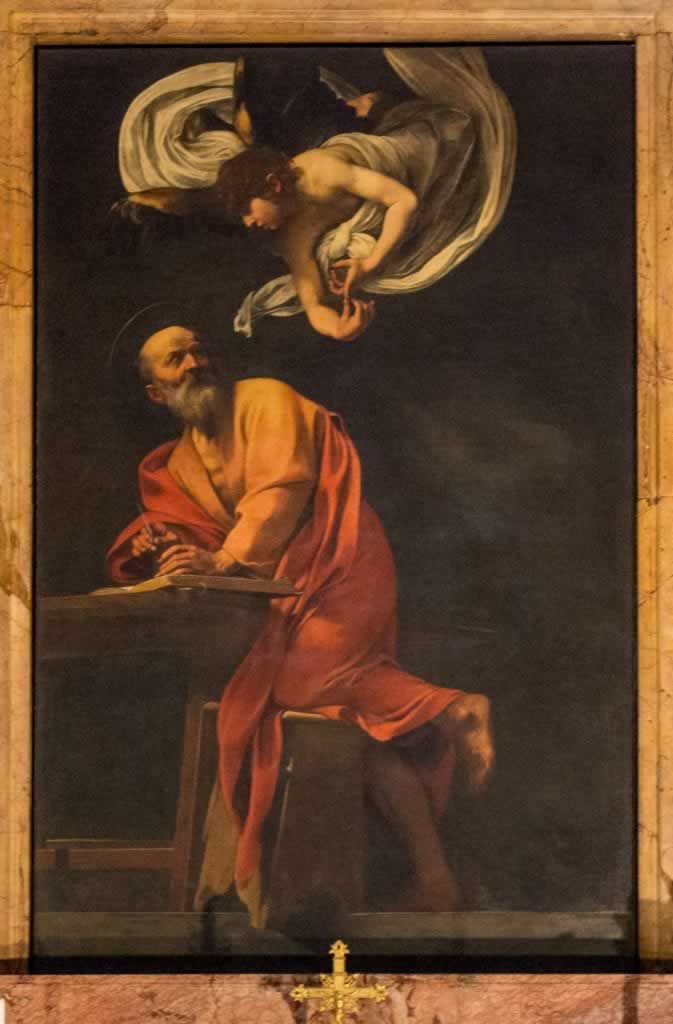 San Luigi Dei Francesi is one of the most beautiful churches in Rome. If you like the baroque style, you’ll love everything about it.

If you want to avoid the tourist crowds, don’t show up at 2:30 p.m. That’s what I did and I found a big line of people waiting to see The Calling of Saint Matthew and the other Caravaggio art works.

The Basilica Sant’ Agostino is in Campo Marzio, on Via della Scrofa 80.

Here you’ll find Caravaggio’s painting La Madonna Di Loreto (Madonna of the Pilgrim). The painting is in the Cavaletti Chapel – the first chapel on the left. 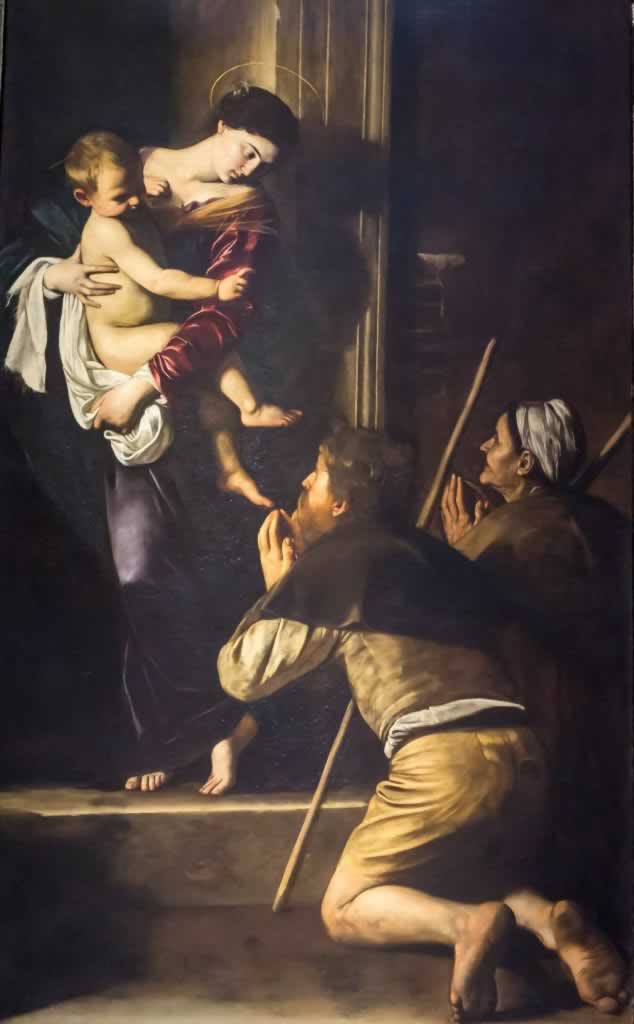 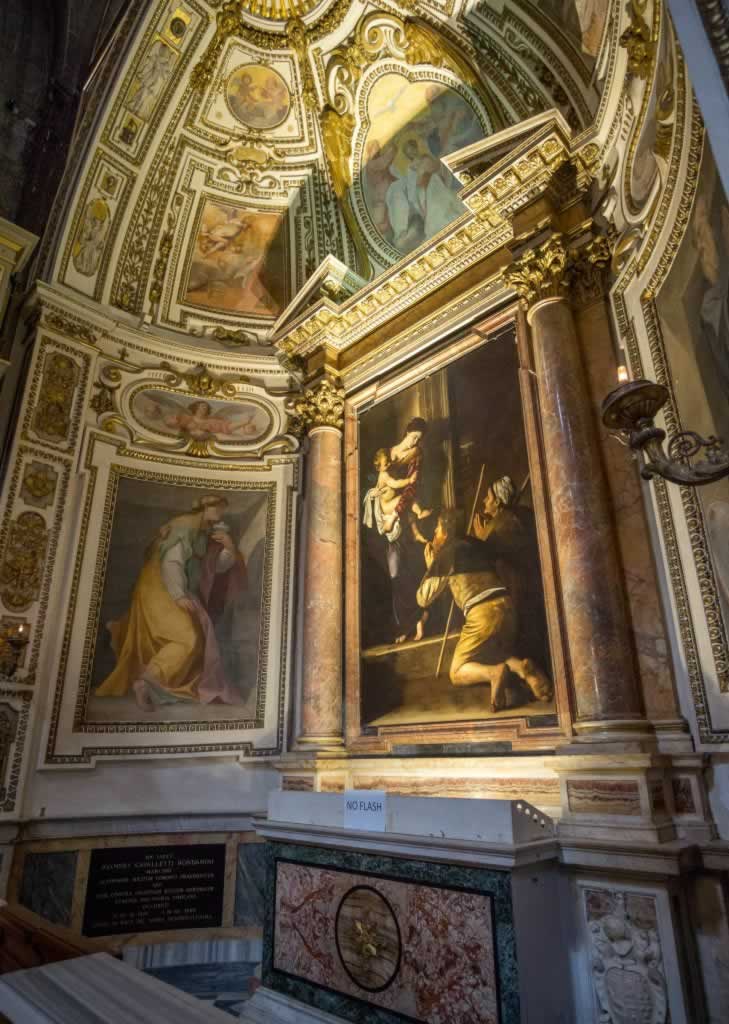 Sant’ Agostino is one of the churches in Rome that host artwork by Raphael – a fresco depicting Prophet Isaiah. Here you’ll also find the organ Vegezzi – Bossi, which is also impressive. 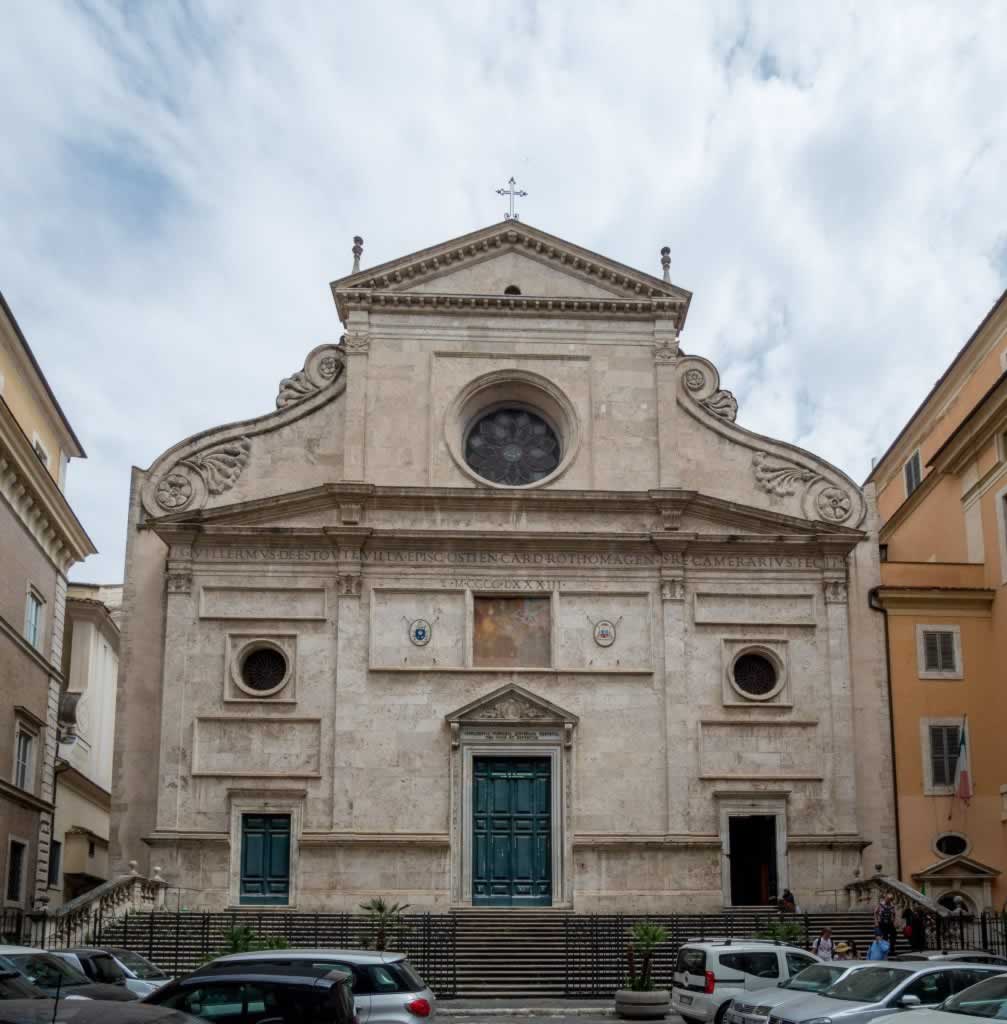 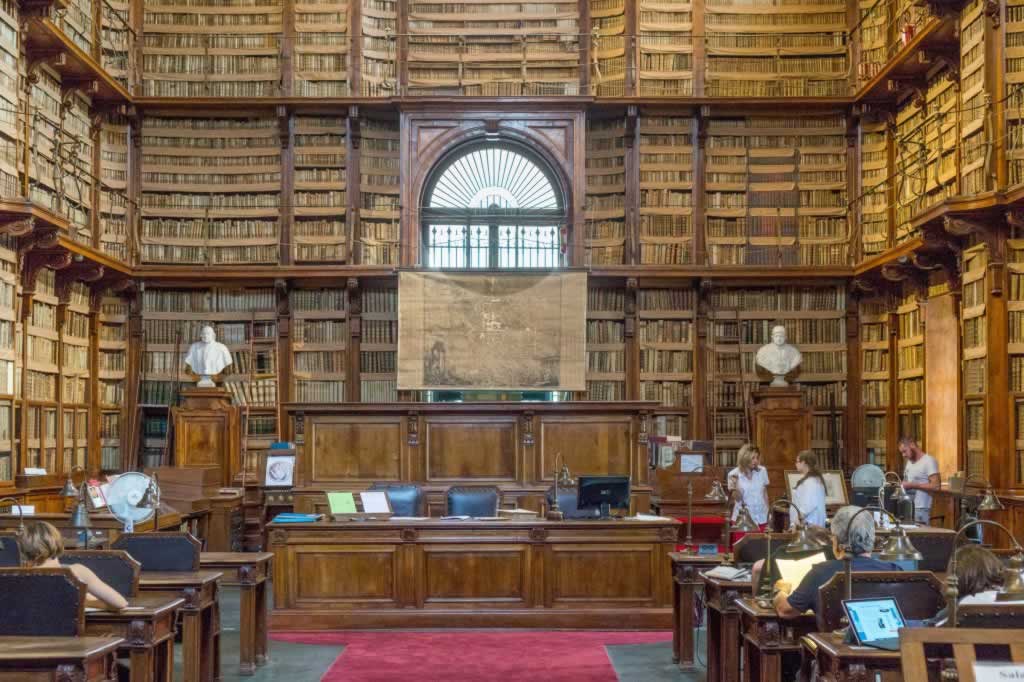 Although the library isn’t a tourist objective, the guardian is a very nice guy. He will allow you to take a look inside and to take photos, as long as you don’t disturb the readers. If you love books, you’ll be happy you’ve entered.

The Basilica of Santa Maria del Popolo is located right on Piazza Di Popolo, nearby the stairs that lead to the top of the hill, and then to Villa Borghese and Galleria Borghese. If you come from Piazza Navona, you’ll enter the square from the opposite side to Porta di Popolo. You’ll see the church on the right side of this ancient gate of Rome, on top of a small flight of stairs.

There are two Caravaggio paintings in the Santa Maria del Popolo Church: The Conversion of St. Paul and The Crucifixion of St. Peter. Both paintings are on the walls of the Cerasi Chapel, on the left side of the altar. 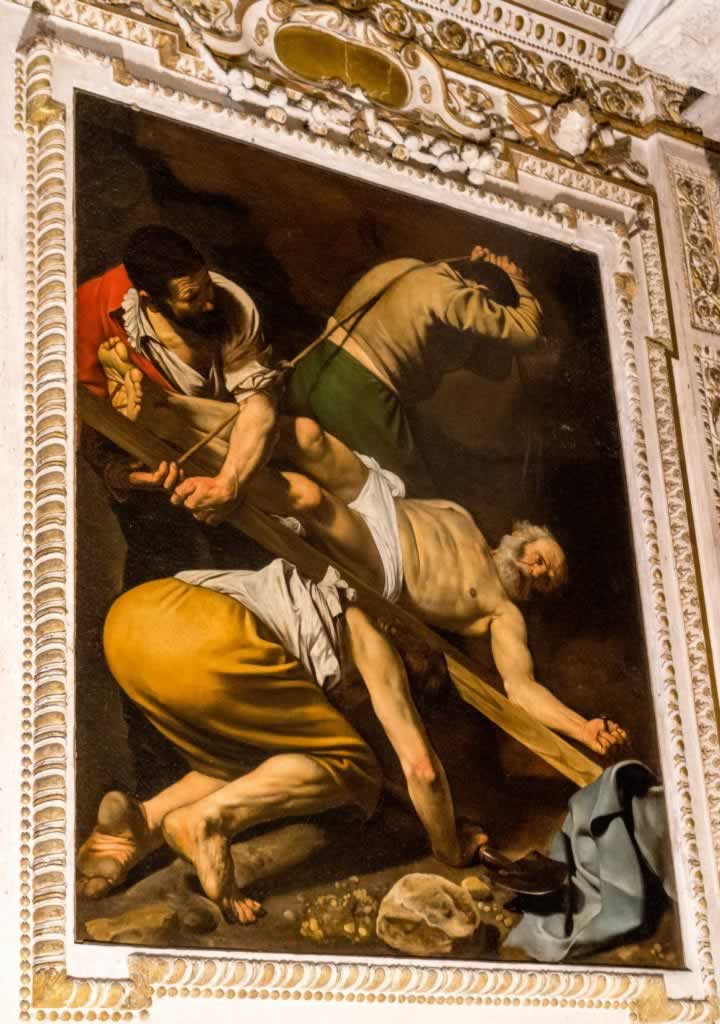 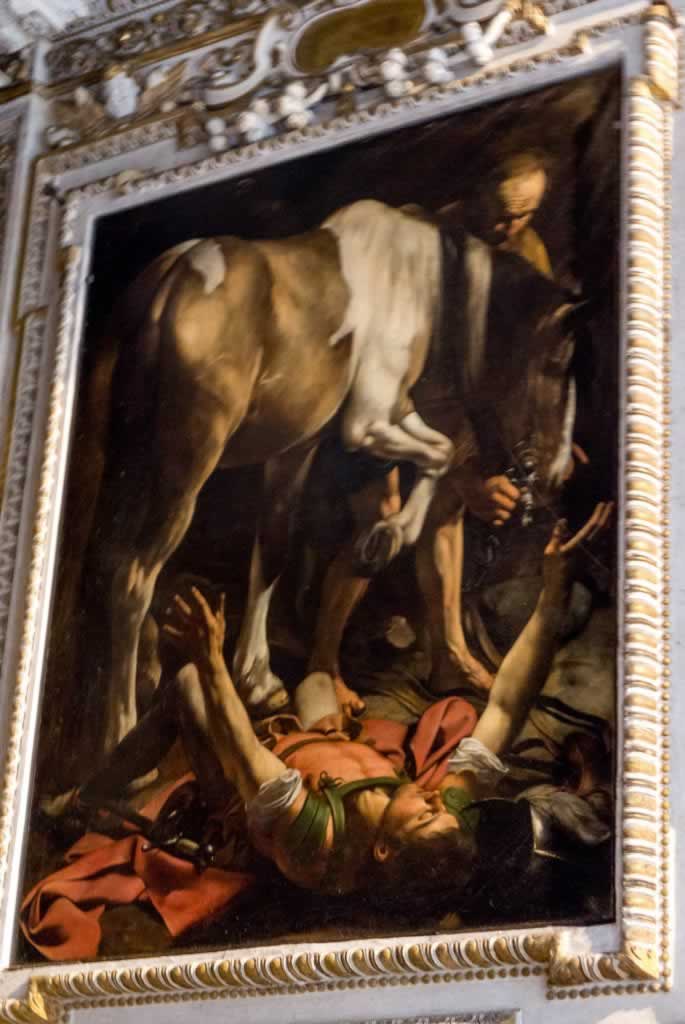 This is also one of the churches in Rome that host magnificent artworks by Raphael, Bernini and other famous artists. It is considered one of the best examples of Renaissance Art.

Have you seen these paintings by Caravaggio in Rome? If not, pin this article for later, here: 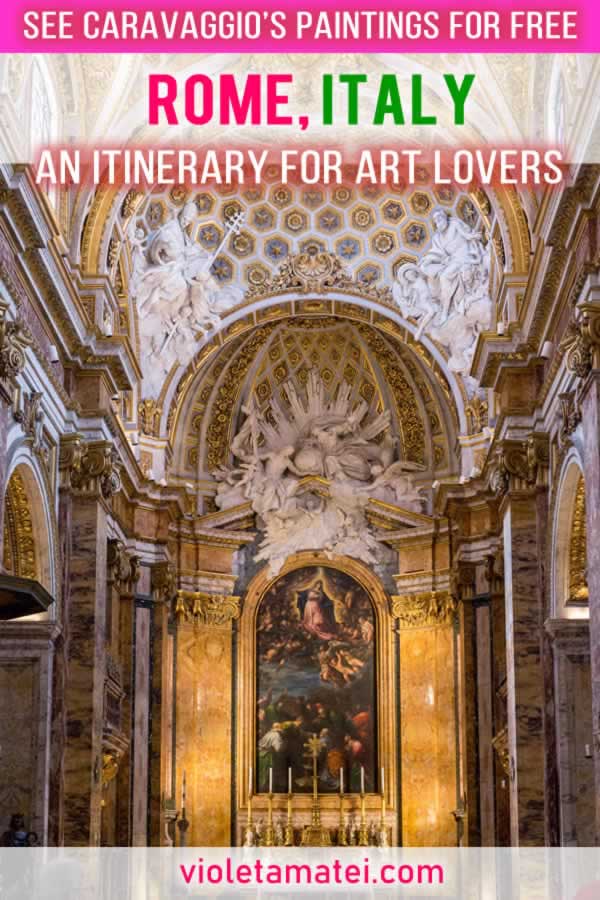 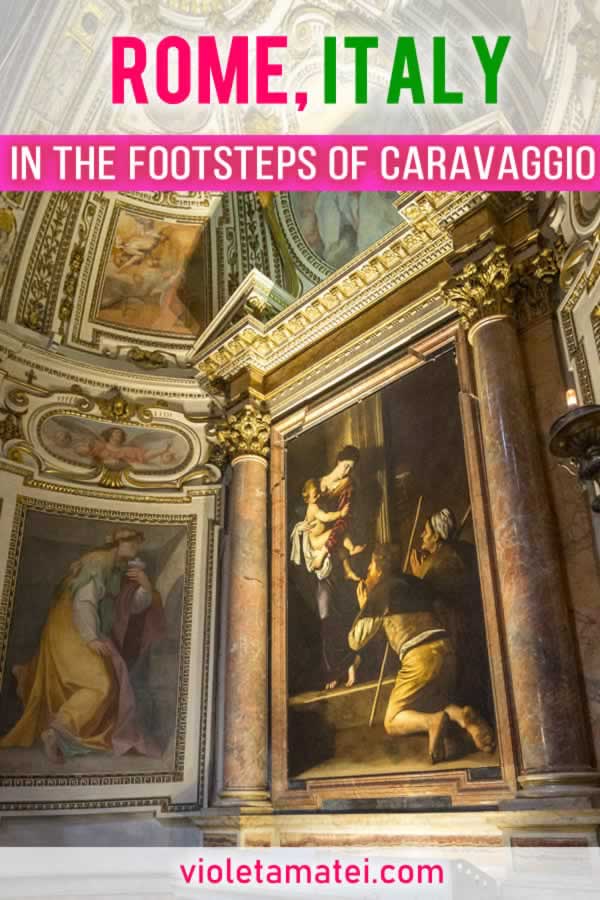