Do you remember my article about the coffin that tells stories (The Ludovisi Battle sarcophagus)? Here’s now a full tomb that also tells stories, Hadrian’s Mausoleum, better known as Castel Sant’ Angelo or Museo Nazionale di Castel Sant Angelo. This castle is located near Ponte Sant’ Angelo, the ancient Roman bridge built by emperor Hadrian back in the time when he through he was going to use that mausoleum.

Back in the year 135 AD, Emperor Hadrian started to worry about his earthly remains, so he ordered the construction of a mausoleum to serve as a tomb for himself and his family. What we know today as Castel Sant’ Angelo is nothing but a giant and beautiful tomb, built from scratch in only four years. Little did he know that Romans were going to use this fortified castle for military purposes. The Sant Angelo bridge was then called Pons Aurelius. It is amazing that this ancient bridge is still erect and in use today.

The Mausoleum of Hadrian was repurposed by smart popes who linked Vatican to this fortress via a 1200 meter underground passageway to escape in times of trouble. Built in 1277, this corridor helped Pope Clement VI to find his refuge during the 1527 siege of Rome. This passageway can only be visited by small groups, so you’ll have to ask at the ticket office whether this is possible. Italy is full of such wonders, but not everyone actually finds them without help from savvy locals.

Castel Sant’ Angelo also served as papal prison. Apparently, Giordano Bruno was imprisoned in this fortress for six years. Benvenuto Cellini, the sculptor, was another famous prisoner that spent some time in the dungeons of this castle.

If you prefer a guided tour of the Vatican and Castel Sant’ Angelo, check out this one, here, at the price of today, Monday, January 30th 2023. It includes the entrance tickets, a traditional lunch and skip the line features at Vatican Museum and Castel St. Angelo.

If you’re familiar with Dan Brown’s bestseller “Angels and Demons,” you may want to check out this tour which will take you to the Church of Illumination to see the secret passage connecting the Vatican with Castel Sant Angelo.

Where Is Castel Sant’Angelo in Rome?

Located on the right bank of the Tiber river, Castel Sant’Angelo is at 10 minutes’ walk from Piazza Navona, by the Sant’ Angelo bridge that leads to St. Peter’s Square and to the Vatican. If you come from Trastevere, you can walk along the river banks, through the beautiful Jewish neighborhood until you reach Sant’ Angelo bridge. Depending on your pace and on your health, it can be a pleasant 20 minutes’ walk. 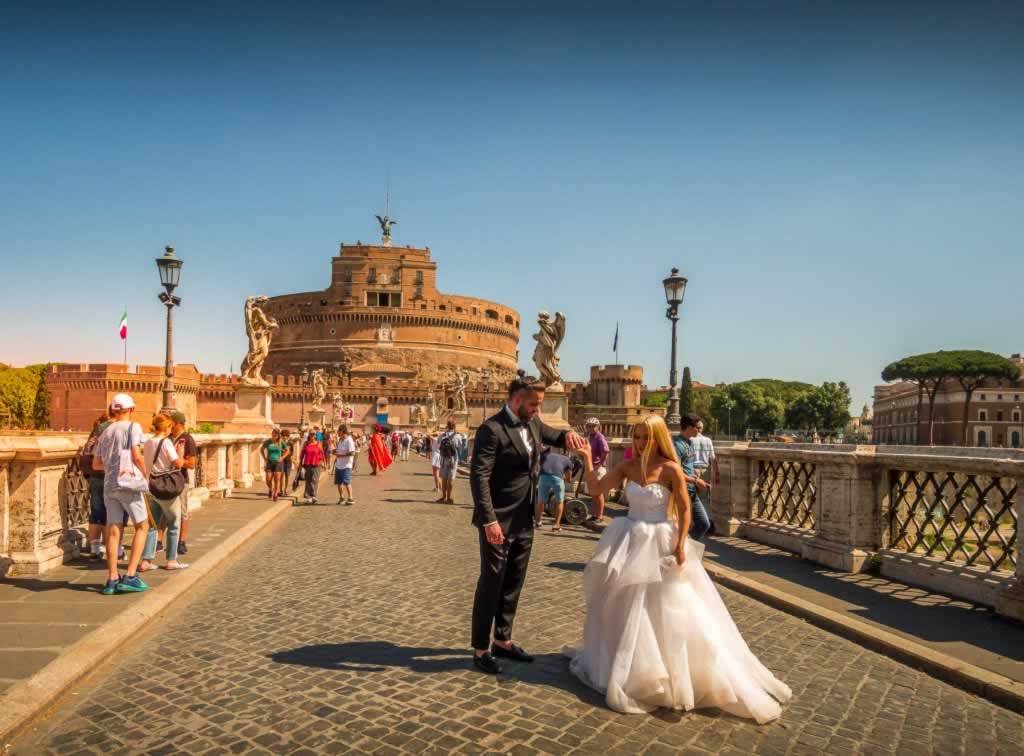 When I got to this part of Rome for the first time, I saw the castle from a distance and I thought it was the Vatican. The two are very close, so you can visit both of them in one day. Add San Pietro Basilica into the mix and you have a rewarding one-day Rome itinerary.

Is Castel Sant’ Angelo Worth Your Time?

Although I’ve read on some websites that this castle isn’t worth your time in Rome, I beg to differ. I loved it! The rooms, the views, the archways, the interior courtyard, and the top terrace are well-worth a couple of hours of your time in Rome. I don’t know about Rome, but if this castle were in Milan, it should have been included in any one-day tour of Milan. Tome has much more to see than Milan, though, so you may not choose to spend half of your available time here inside a castle, no matter how beautiful.

Today, Castel Sant’ Angelo is one of the most interesting museums in Rome, not because of its spectacular rooms or artifacts, but because of the very experience of being there, of climbing all five floors on the spiral staircase, and of enjoying panoramic views of Rome. 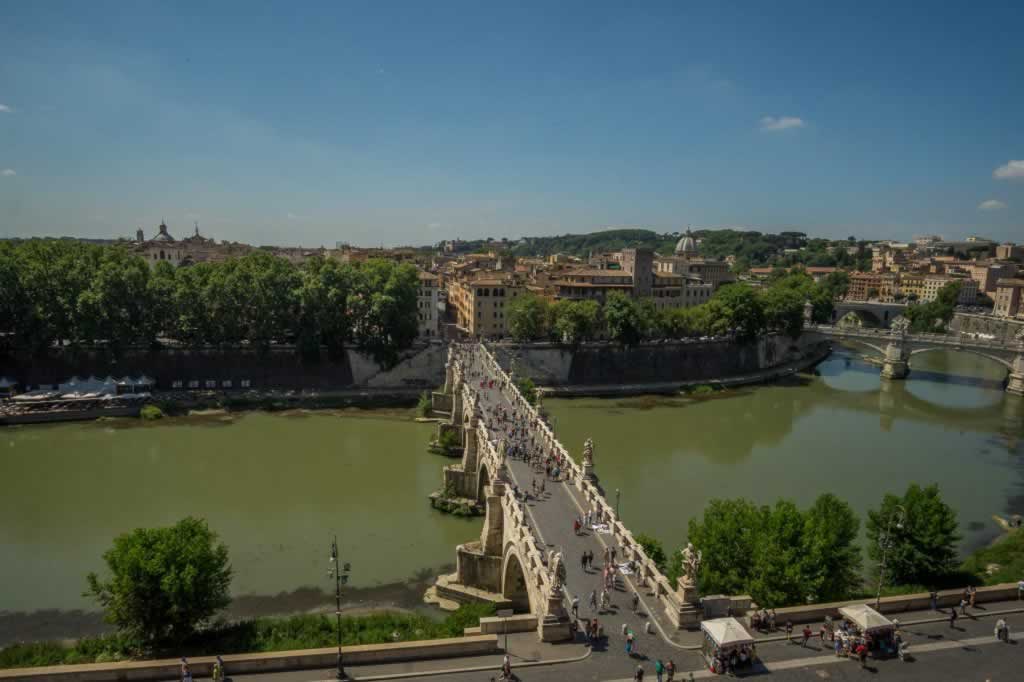 Rome view from Castel St Angelo (one of the intermediary floors): 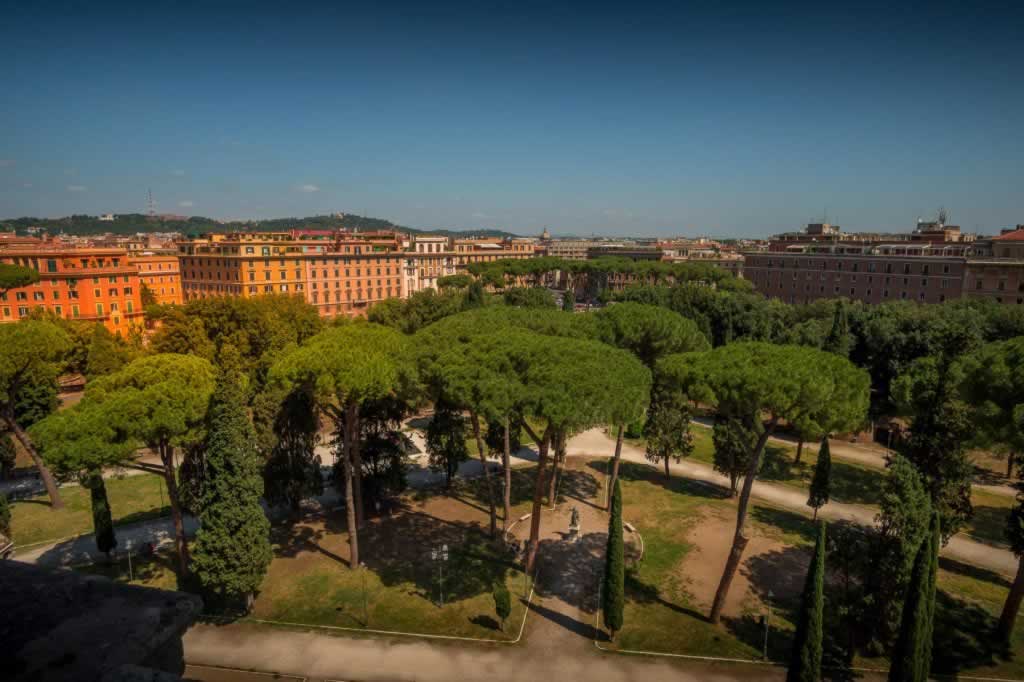 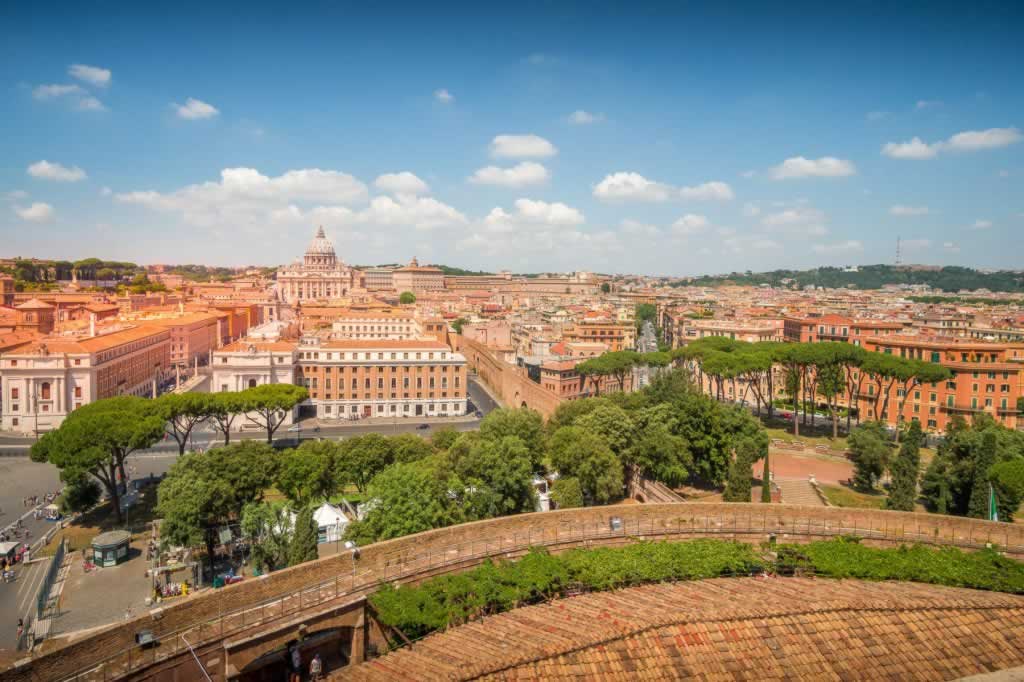 The top terrace is one of the best photography spots in Rome. During summer, it is also one of the hottest spots, so make sure you wear a hat and plenty of sunscreen.

Since the building was repurposed multiple times, the end result is a mix of different styles and looks. As you progress, you’ll see how things around you change, shifting from the cold dungeons where prisoners were held to the cozy apartments of the pope.

The lower floors are more fortress-like, with bare walls and a dark look. In fact, the lower part of the castle is the Bastion of San Marco, which was built in the 15th century to transform Hadrian’s Mausoleum into a military fortress. Later on, in the 17th century, the bastion was again adapted to suit the use of heavy artillery. 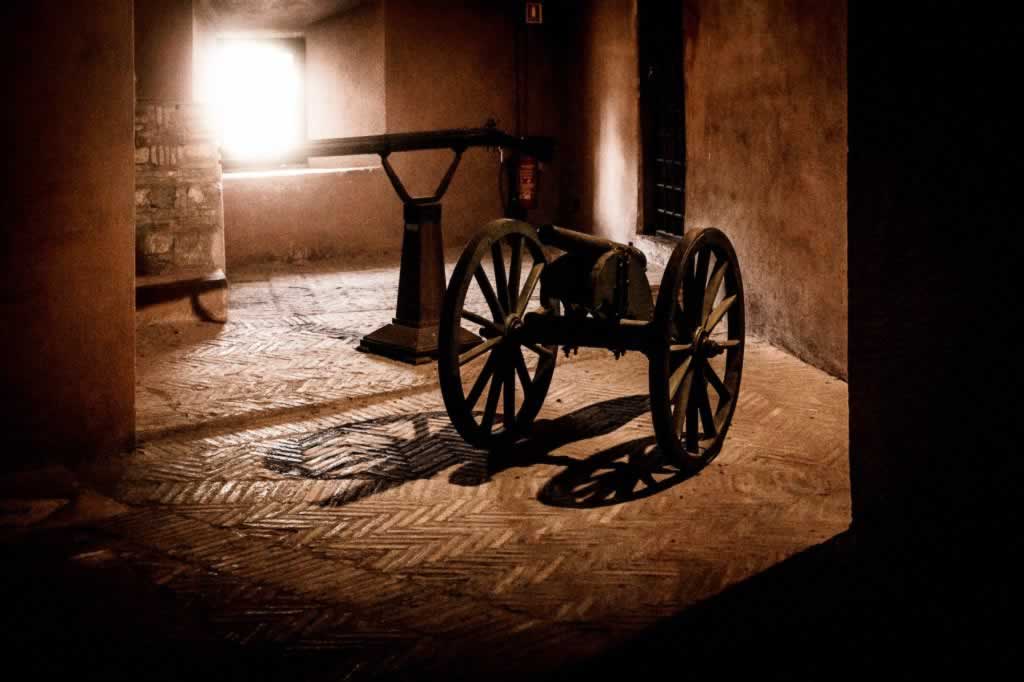 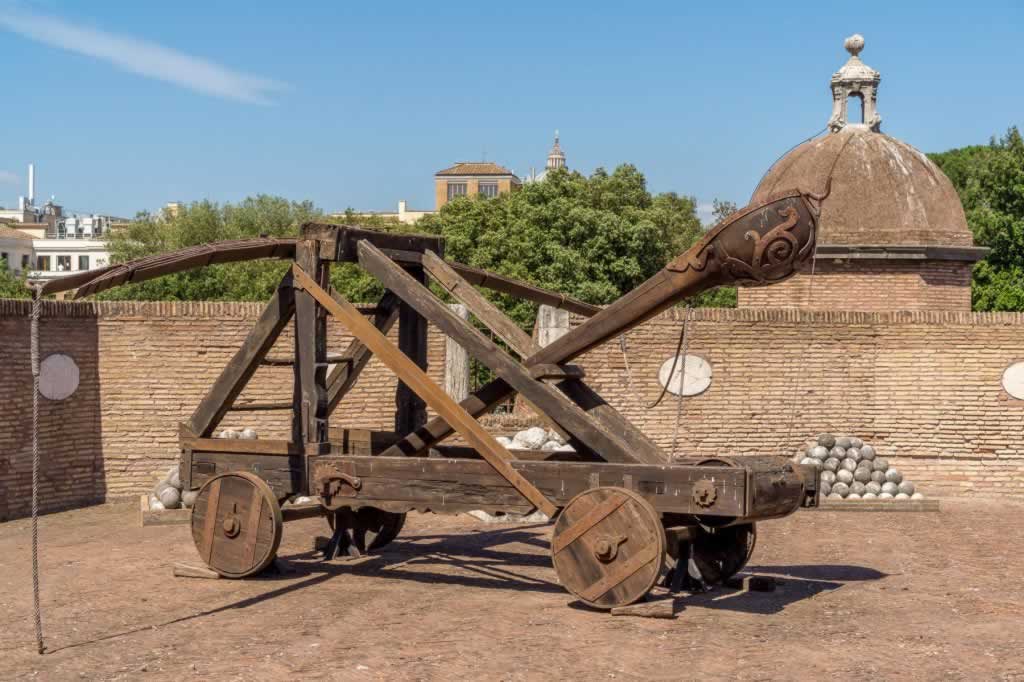 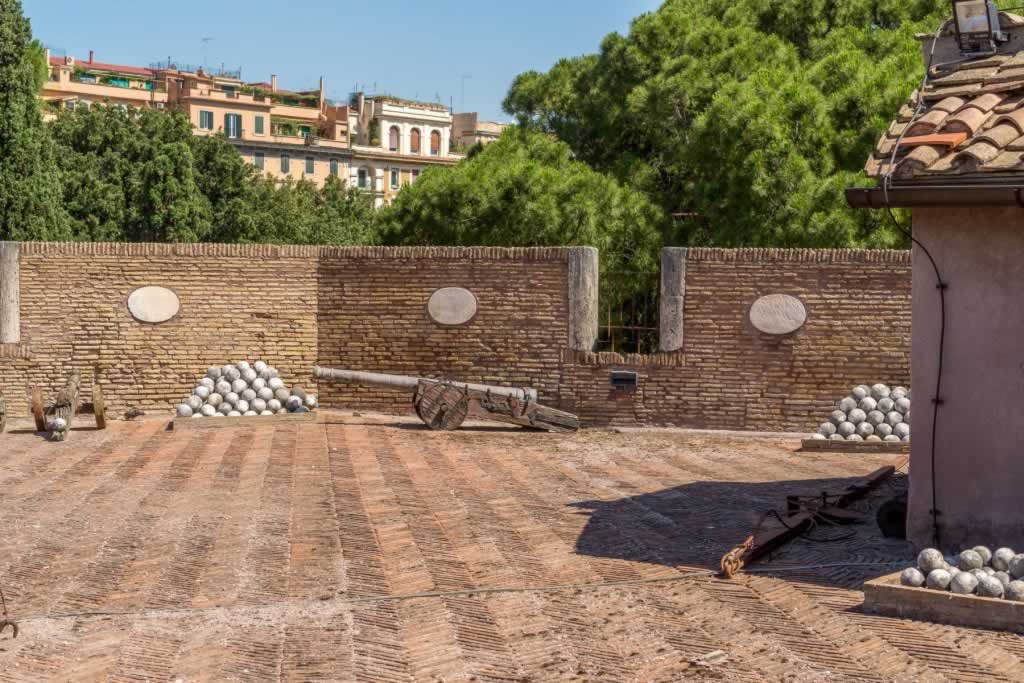 On the top of the Bastion of San Marco there is a large terrace with cannons, cannonballs, and even a catapult. By the time of my visit, the access to the terrace was restricted. I read in the official guide of the museum that from here you can see the Pasetto di Borgo (the passageway that links Castel Sant’ Angelo to the Vatican.

The next part of the castle is the Bastion of San Luca, followed by the Bastion of San Giovanni. Next, you’ll get to the ramp that allows you to access the cylinder. Fortunately, today you come as a friend. However, foes were welcomed with a trap door opening up beneath their feet. 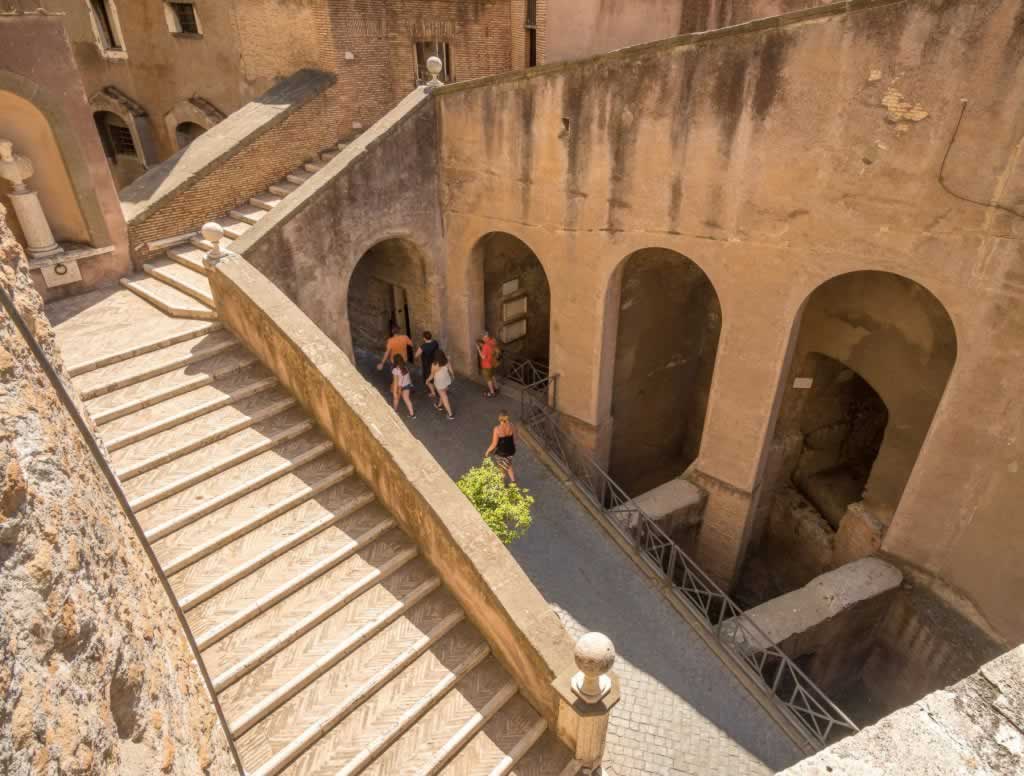 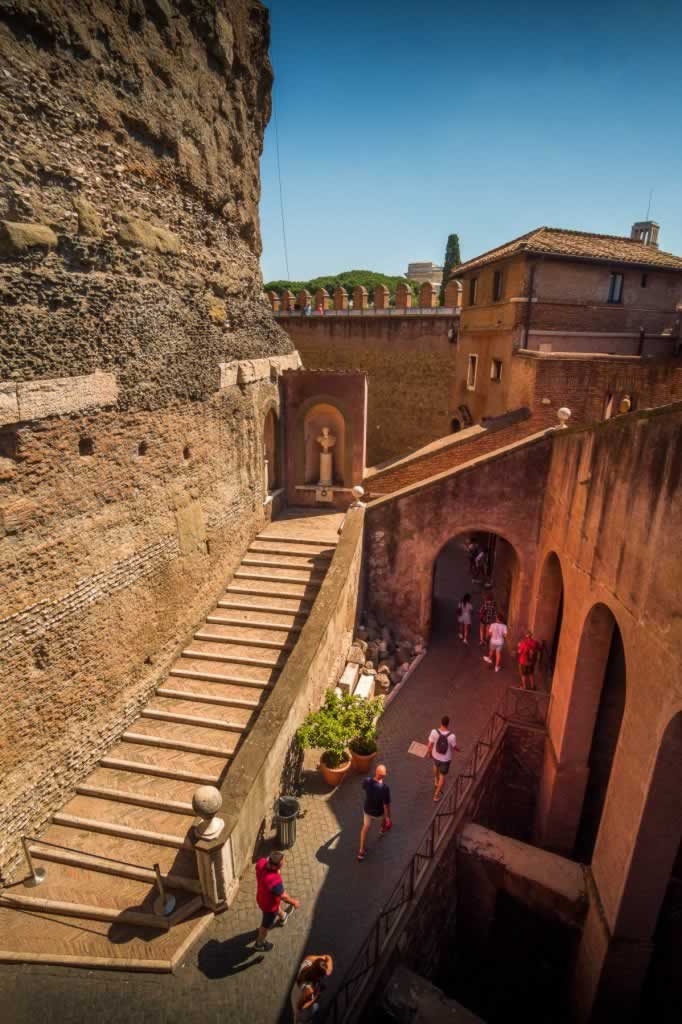 This is the ramp that takes you to the cylinder: 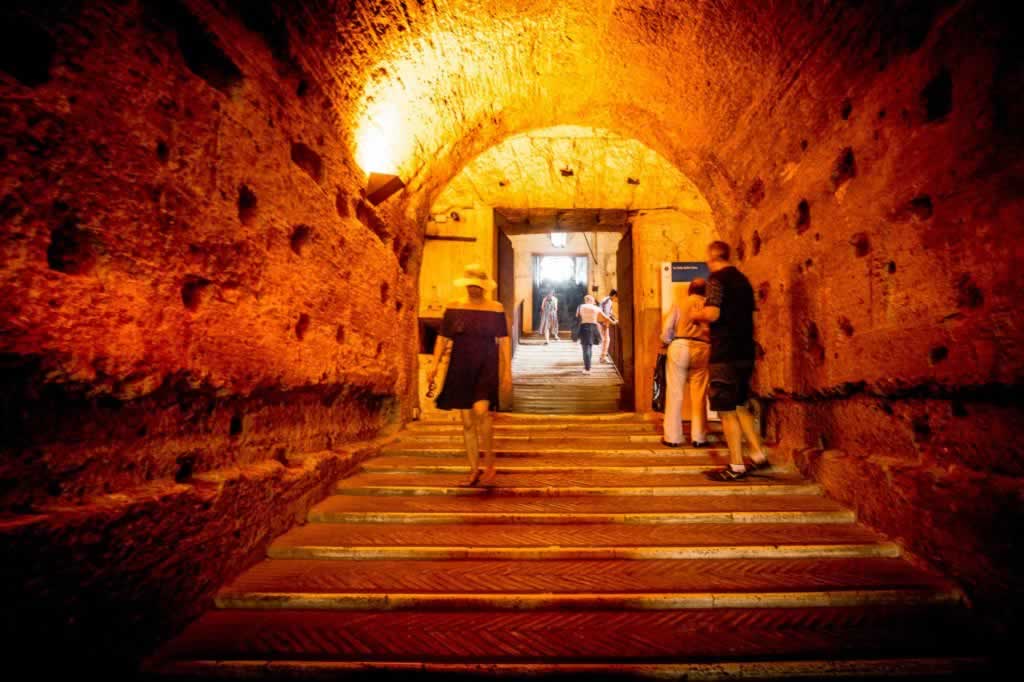 The upper floors are decorated with wall paintings and look much more comfortable. This is where the apartments of the popes were. Paul III’s Loggia and The Library are two beautiful rooms with painted walls and antique furniture. The Paolina Room is probably the most amazing of all. Covered in intricate paintings, this was the entertainment room in the pope’s apartment.

Pope Clement VII also has his own apartment inside the castle. His rooms are also very beautiful and adorned with heavy decorations and paintings. 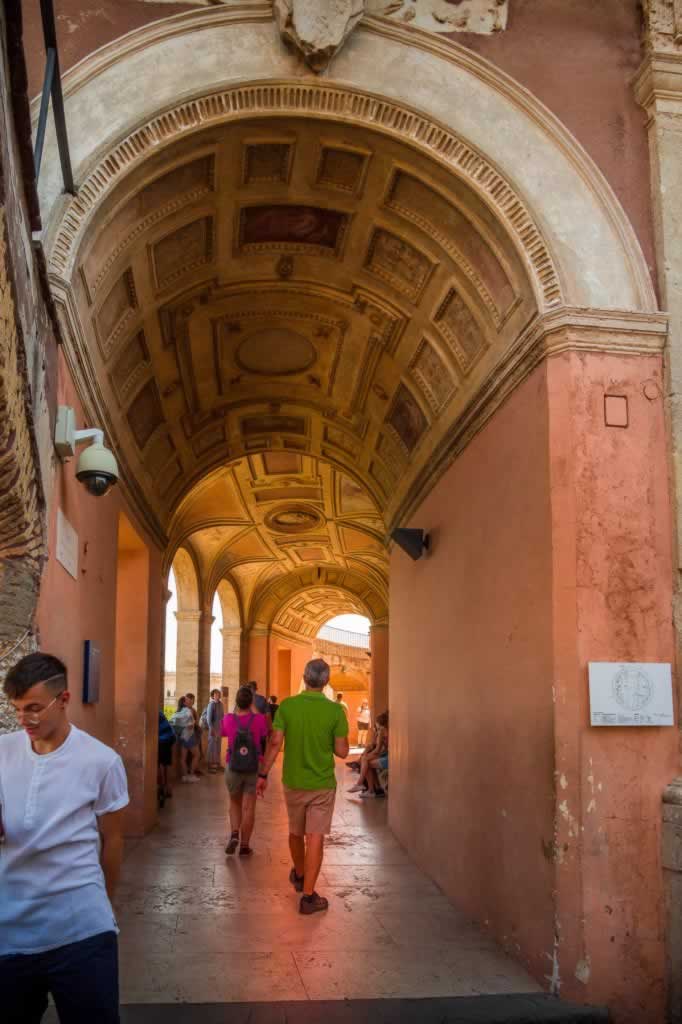 This is the Paolina Room: 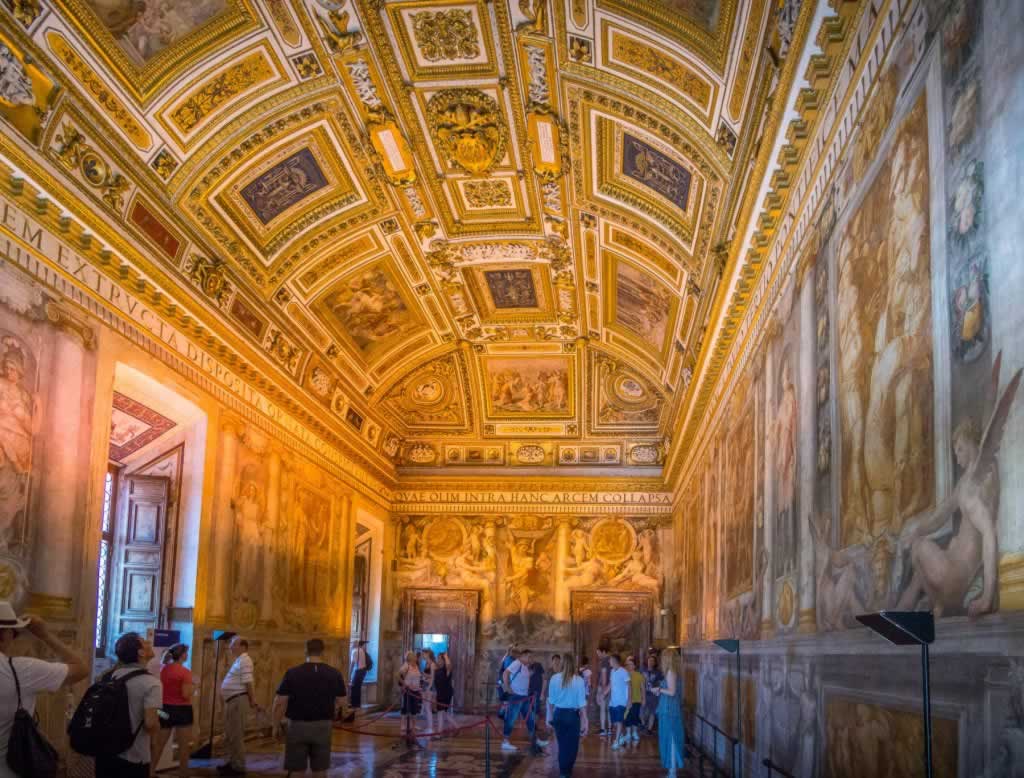 What I didn’t like that much were the crowds. While in the beginning of the visit we were only a handful of people, by the time I got to the top there were already crowds in all rooms and on all corridors. Also, the rooftop terrace got quite crowded. Nevertheless, don’t let this spoil your visit. You’ll find opportunities to take great photos, should you have the patience to wait for people to move out of your sight. If you visit Rome during summer, the terrace will be very hot, so most tourists will only take a few photos and go back inside the castle (which is nice and cool even on the hottest weather days).

Fortunately, the narrowest passageways are only one way – you climb to the last floor on one path and you use another exit to get back on the lower floors.

Having a Snack in Castel Sant’ Angelo – If You Sit, You’ll Pay More

One one of the upper levels of the fortress there is a restaurant with a view. By the time you’ll get here, you’ll be tired and you’ll probably need a toilet. This is the perfect spot for a toilet break, a snack and a rest.

Caffetteria Ristorante Le Terrazze Castel Sant’Angelo has tables all around the cylindrical room. Many of these tables are smartly placed to offer magnificent views of the surroundings. 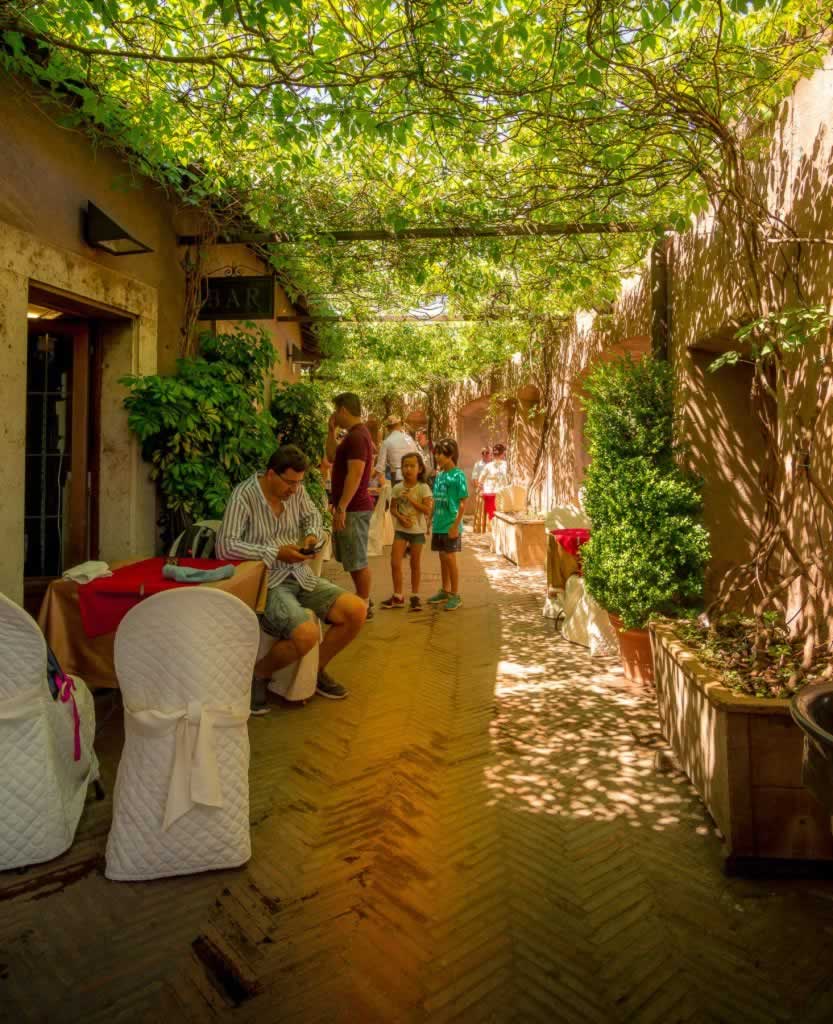 I didn’t sit. I asked for a sandwich. Before telling me the price, the vendor asked me where I was going to eat it. I said I didn’t know but I was sure I could find a place somewhere. His question, though, had a precise purpose – there’s a price for sandwiches to go and another one, bigger, for eating your sandwich at one of those tables. I took it to go and I ate it standing by one of the rampart windows with a magnificent view. It was hard to decide what to do first: to eat or to take photos.

Everything in the sandwich was very good. Fresh ingredients, nice bread, and a size to fill even a very hungry person. I don’t remember the price, but I think it was less than 5 Euros.

Showing up early in the morning will save you from doing the line. The castle is open between 9am and 7:30pm. The ticket office is open only until 6:30pm.

Depending on where you stay in Rome, you’ll need between a few minutes and one hour to get there. Anyway, I recommend that you choose a hotel in the center or as close to it as possible, in order to avoid long commutes by public transport. Buses in Rome are awful – they don’t follow a predefined schedule and sometimes waiting times can reach one hour. The Metro is better, but why go underground when you can walk? Rome is an open air museum. Its cobblestone streets and its buildings are as many photo opportunities.

The ticket to Castel Sant’ Angelo costs 14 Euro (as of June 2019). If you’re lucky, you may have the pleasant surprise of a major discount. During my trip to Rome, there was a special promotion – if you showed up before 11am, the price of a ticket was only 5 Euro. Here’s the official site of the museum. Check it out before you go to see the current visiting hours.

If you can’t get to the castle early in the morning, you may want to consider booking a skip the line tour. It costs more, but you get inside the castle right away.

A Castle in Rome with a Dedicated Mobile App

After you buy your ticket, you’ll be able to download and install the app of Castel Sant’ Angelo on your mobile device. You’ll see the map of the castle with the main stops of your tour marked on it.

The app also features a list of all rooms you’ll visit, together with some photos and descriptions, and with an audio guide. The interactive map requires Bluetooth activation and it only works as long as you’re inside the castle. The other features are available even after you leave. I still have the app on my mobile. It is a nice souvenir from a beautiful week in Rome.

Pin this article for later here: 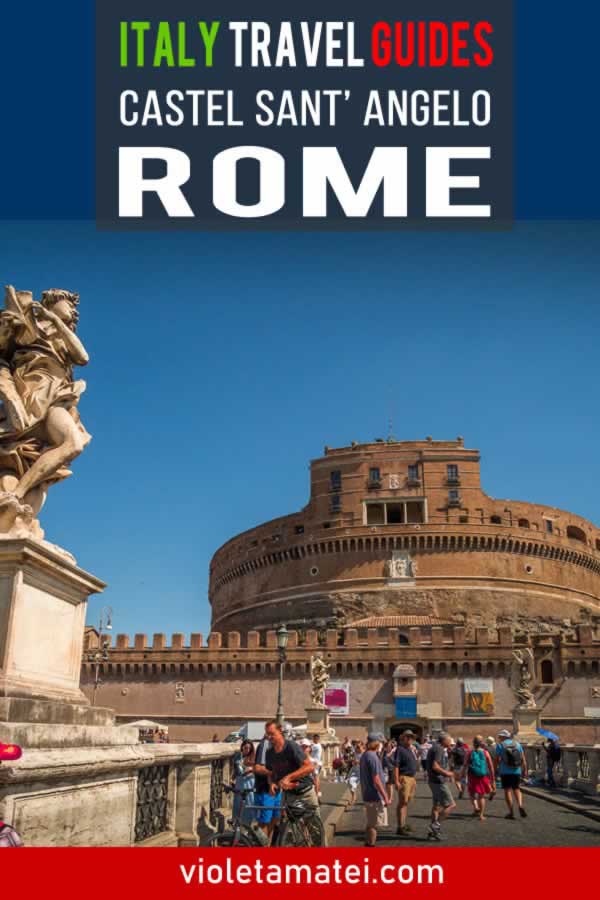 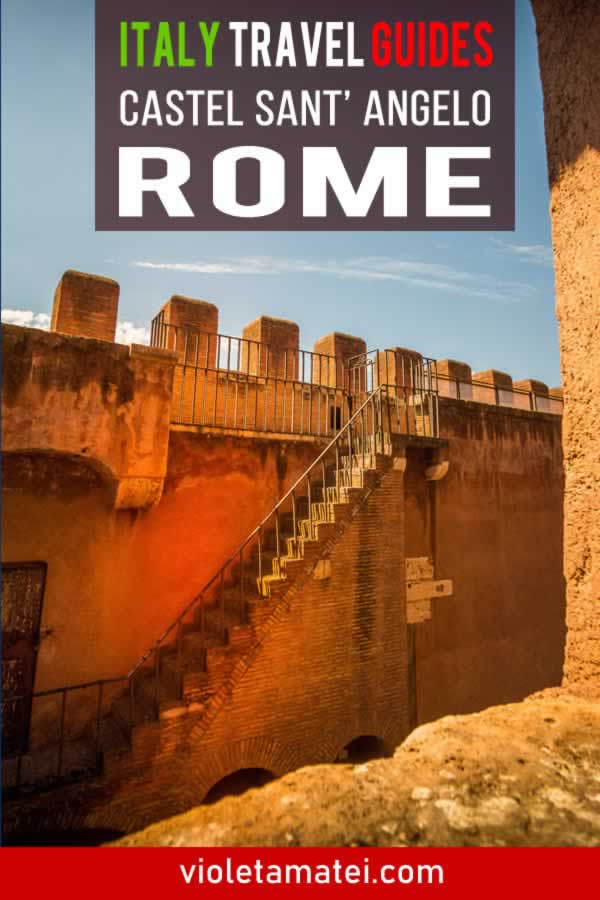